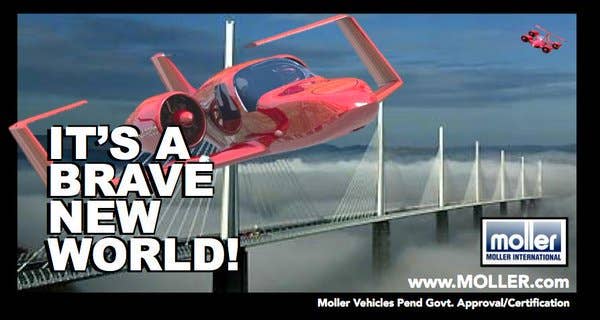 I love SkyCar_Jack so much. He's Marketing Director for Moller International, which should be called the Flying Car Company but isn't. He's got a great sense of humor. Here he tweets that flying cars "are coming this decade...pending government approvals."

This is the same government that won't let us have good headlights, you know. The kind that are on cars in Europe. Just sayin'. (Moller International)

Wow, this flying car market is really taking off. Or not. I'll believe it when I see a working prototype. In the meantime we have Moller's apparent enemy, Lilium, who swears this thing will hit the market in 2018. Also, they swear you'll only need 20 hours of training. Right. Talk about a product that needs full Autonomy. (Lilium Aviation)

And it only cost him $9000 and took 50 hours of labor, or about even with trading in his Tesla Model S and getting a new one, except for the labor on the trade-in, which would have been two hours at most. To each his own. I wonder if it voided his warranty. Actually, I'm not wondering. I'm sure of it. I've sent Tesla an email, and await their predictable response. (Teslarati)

Drive Wire: The Flyboard Is What The Hoverboard Should Be

Drive Wire: Watch This Guy Fly Down a Mountain in a Wingsuit