This is the endgame of all Previa mods. 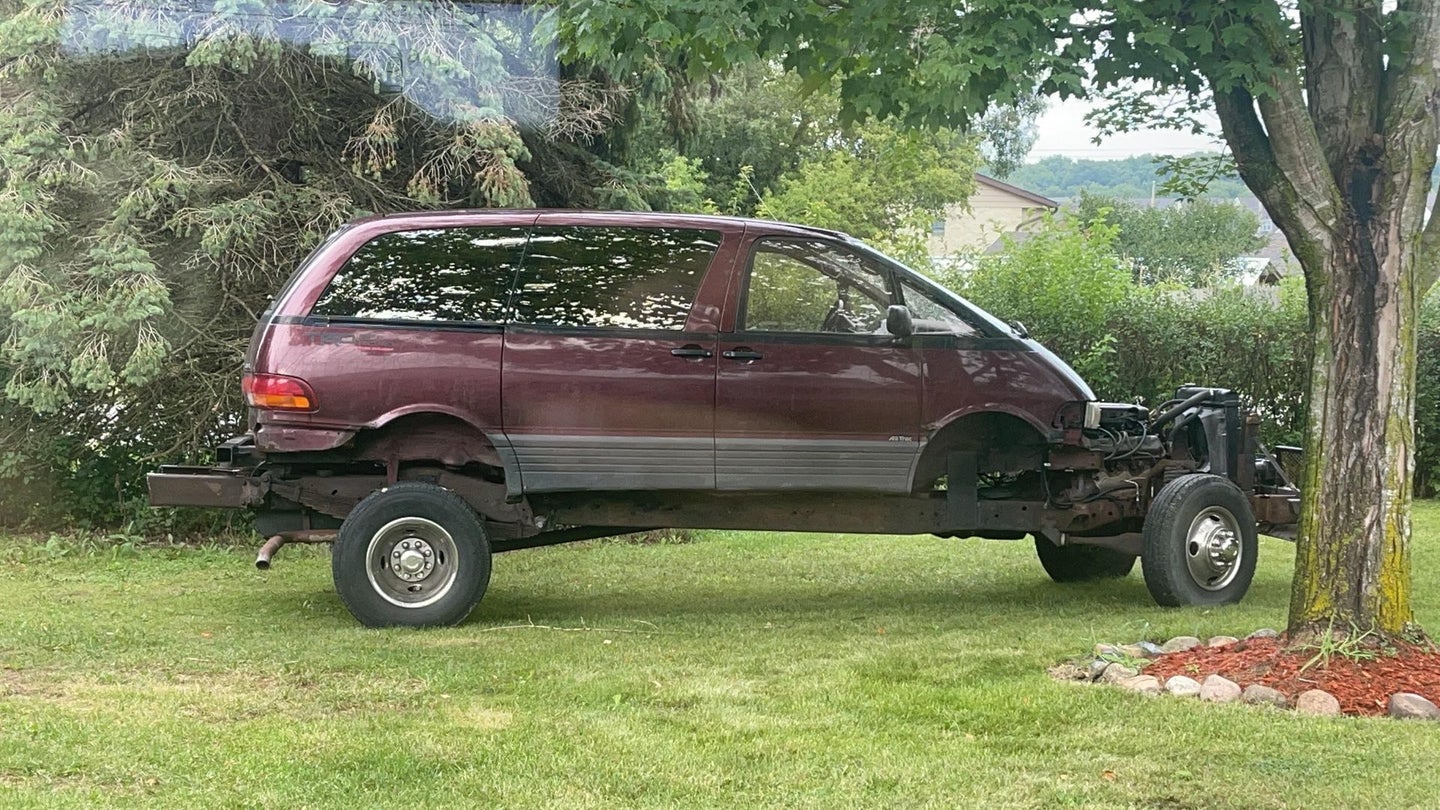 You know that little voice in your head that tells you to do the most unreasonable things at the worst times? It's the one that I totally shouldn't encourage, but I'm going to anyway because it sometimes leads to the most ridiculous automotive projects I've ever come across while browsing Facebook Marketplace.

Today, I present something that might earn a spot amongst your top 10 finds of all time: a Toyota Previa minivan mounted atop a motorhome chassis. Yep.

Let's start at the beginning because to understand where this fever dream of a vehicle came from, it's important to know where it's been.

In 2020, owner Steve Both decided to enter this factory supercharged Toyota Previa All Trac in the Gambler 500 in its stock form. Sadly, an underestimated puddle resulted in the van's engine becoming hydro-locked. He was eventually able to get the car running, but the damage was already done. He limped the van back to his campsite and eventually transported it home where it spent the next seven months being used as a parts bin for other Previas. Its next destination was the scrapyard, but before it was taken to its final resting place, Both's friend sent him a Facebook Marketplace listing for a free 32-foot motorhome—this is when the lightbulb came on.

Both decided to go check out the free RV. It was in rough shape, but the Ford 460 V8 big block under the hood was able to run with a little bit of starting fluid—and it had just 50,000 miles. That was enough to convince Both and his friends to flat-tow it back to his house.

Over the next four days, Both and his friends were committed to pairing the two unusual vehicles with one another. They began the process by demolishing the body of the motorhome and salvaging the chassis for the next step.

Now came time to mount the Previa body to the RV chassis. Nearly everything underneath was cut off and an optimal location was chosen to place the body. Both told me that "very little" modifications were actually needed to get steering, throttle, and brake controls working between the chassis and its new body.

The wild Previa mashup quickly became a hit, especially since it retained pretty much all of its factory interior. Both has happily driven it on the road without getting pulled over. He says that the vehicle sports a Wisconsin "Hobbyist" license plate and that the local Department of Motor Vehicles technically classifies this as a hot rod under state law...though I'm not sure many people will risk this one on paved roads.

Since finishing the build, Both has had his fun with the Previa. He now has it listed for sale on Facebook Marketplace for the next interested party to scoop up. The surprising part is that it's not even unreasonably priced. I mean, why wouldn't you buy this for $3,000?