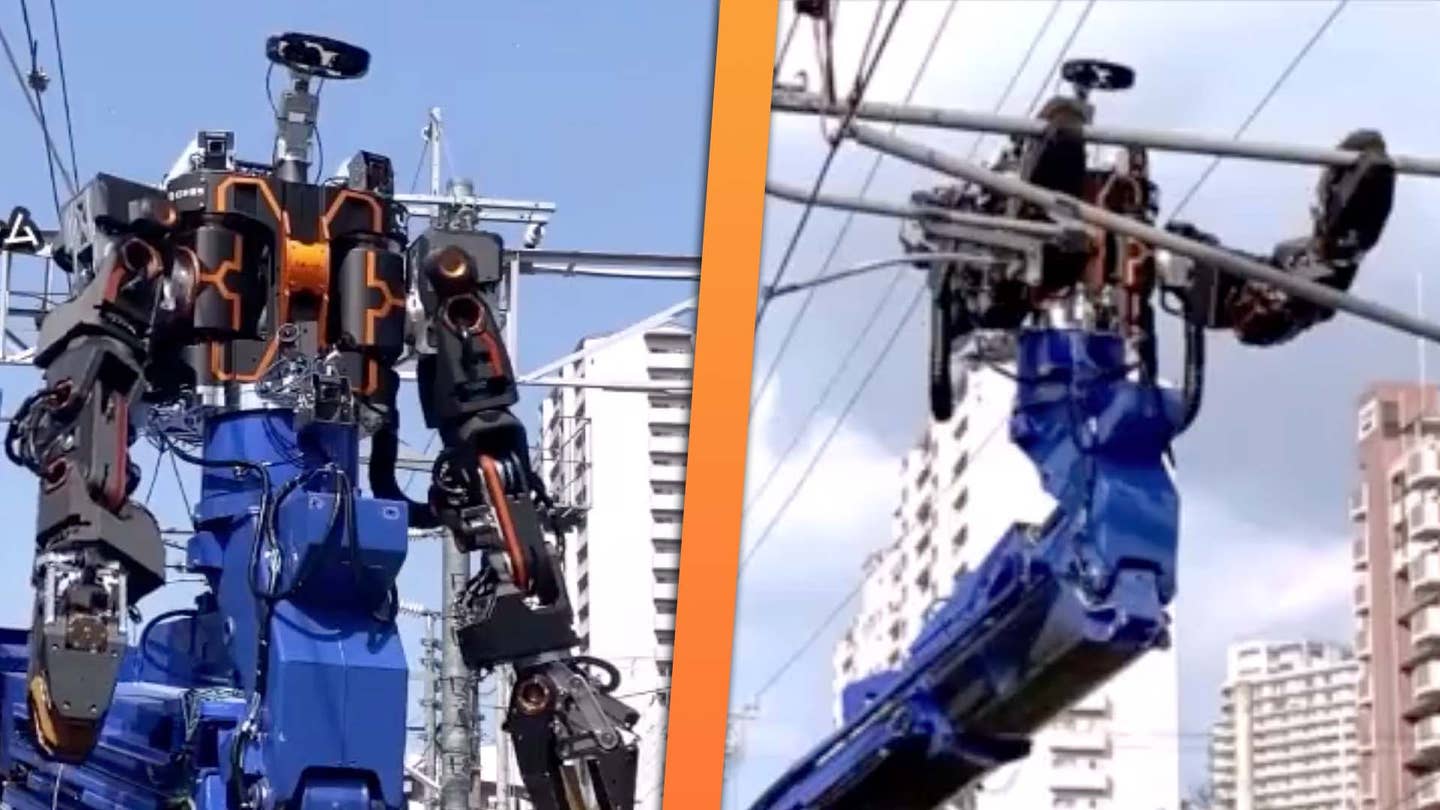 Electrified rail is a brilliant solution to mass transit, and something Japan has thoroughly put into practice. But there still remains the question of how to repair the catenaries that power electric trains. In Japan, the standardized power that the overhead wires transmit is 25 kilovolts (kV) at 60 Hz. While voltage is not the direct factor that leads to electrocution death (rather, that's more a factor of current), 25,000 volts is not something anyone wants to reach out and touch, even on accident.

West Japan Railway Company (JR West) has devised a prototype that will hopefully make dangerous electrical line work a thing of the past, with the help of virtual reality and giant mechs.

The massive maintenance device is, essentially, a crane arm with a robot torso attached, all connected to a flatbed train car. The robot has articulated arms, claw-like hands, and "eyes" in the form of wide-view cameras rotated on a... well, head. (Watch that video and tell me this thing isn't a Big Guy.)

The entire setup rolls around on its railway service car to wherever dangerous work is needed. Once there, an operator controls the entire humanoid device with a VR headset slash motion control system. The massive, joystick-lever-esque motion controllers that the operator uses are set up with force feedback so that if the robot encounters unexpected resistance, there's actual tactile awareness for the user, to make it more dextrous. In addition to keeping workers away from dangerously high voltages, JR West also notes that this massive mech will eliminate the need for workers to sit in a cherry-picker basket or at the top of tall platforms because it can be remotely operated from the ground.

The prototype is still a one-off experimental project, but if testing is successful, JR West hopes to have it integrated into work by 2024. The form factor is undeniably cool, and a humanoid design makes perfect sense here. Humans are most dextrous with their own bodies; replicating that form on a massive scale and allowing someone to control it as their own limbs is truly the most straightforward solution. Hopefully, with more peaceful applications like this, Shinji won't be quite so unwilling to get in the robot next time.

‘Thank You for These 20 Years’: Honda’s Asimo Robot Says Goodbye Ahead of Decommissioning

Asimo’s retirement speech was a heartbreak on par with the incinerator scene in Toy Story 3.