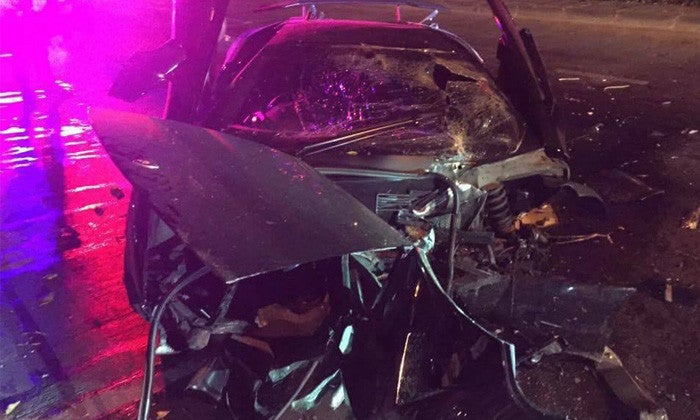 On Monday morning, a Thai man totaled his friend's Lamborghini Murcielago SV after losing control under a bridge and  slamming into a palm tree, Coconuts Bangkok reports. Regrettably, the limited-edition Lambo—one of 350 built, and apparently only one of 10 in Thailand—disintegrated into many pieces...presumably along with their friendship, too.

Apparently the driver, Satirawat Kampiranon, had a late night with some of the Murcielago owner's friends at a restaurant. A few hours later, the owner, a real estate tycoon named At-asira Khemklad, let Kampiranon take two of their friends home in the two-seat supercar. Kampiranon lost control of the black Murcielago SV while traveling under a bridge, clipped a motorcycle carrying a teenage couple, and eventually careened straight into a tree.

The only person who escaped injury was the driver: The two passengers in the Lamborghini sustained arm and leg injuries while the teenage couple on the motorcycle came out of the crash with just bruising. The the same can't be said for the Lamborghini, though—judging by the photo, it looks as though it will be deemed totaled.

Surprisingly, when the driver was tested for alcohol, he tested negative, Pol. Capt. Damrongpol Panthanam said. Kampiranon was eventually charged with careless driving.