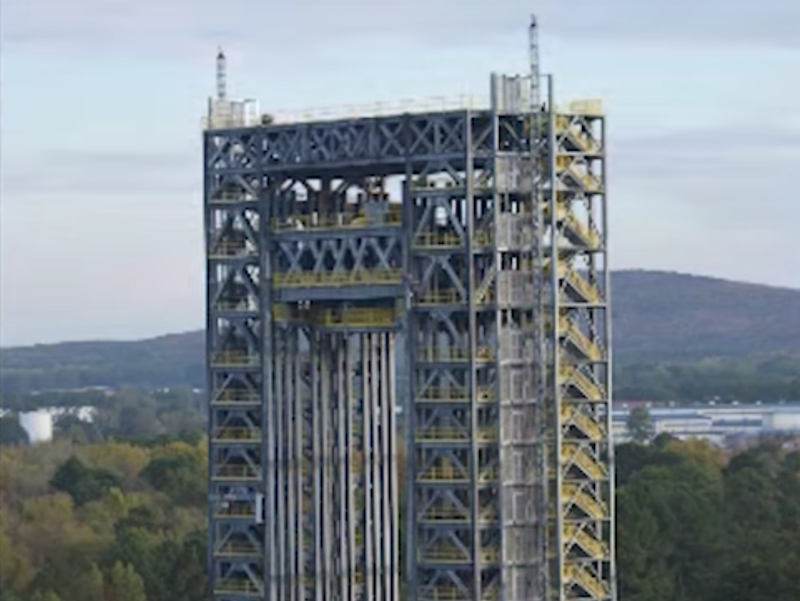 The world's most powerful rocket is one step closer to its mission to Mars. This time-lapse video compresses two-year construction of Test Stand 4693 at the at the Marshall Space Flight Center in Huntsville, Alabama into 60 seconds. The 221-foot structure is one of two huge towers designed for the Space Launch System (SLS,) and it will subject the core stage's 537,000-gallon liquid hydrogen tank to the same stresses and pressures it will enduring during launch. The stand uses 38 hydraulic cylinders to simulate launch dynamics by pushing, pulling and bending the liquid hydrogen-filled tank. During 30 or more test scenarios, the cylinders will extend and retract, and push and pull in different combinations, applying up to 340,000 pounds (approximately 1.5 million newtons) of shearing or sideways force, while sensors capture temperatures, pressures, high-definition images and other information.

Construction of the test stand began in May 2014 and ended in December 2016, and is built on the same foundation used in the 1960s to test the Apollo Saturn V F-1 engine . There is no other structure designed to accommodate massive tanks that make up the SLS's core stage, which is the backbone of the rocket, and Test Stand 4693 can be used to test tanks and equipment of other sizes in the future.

NASA's SLS will be used to carry the Orion spacecraft and astronauts on deep-space missions, including to an asteroid in lunar orbit, and on the journey to the Red Planet. The core stage flight engine section completed welding in April, and the Orion spacecraft's first flight is scheduled for 2018.

The next best thing to being in orbit.

The space agency will be live-streaming the mission into the afternoon.