It’s the best of the two F12 models blended together, along with a heaping helping of 275 GTB. 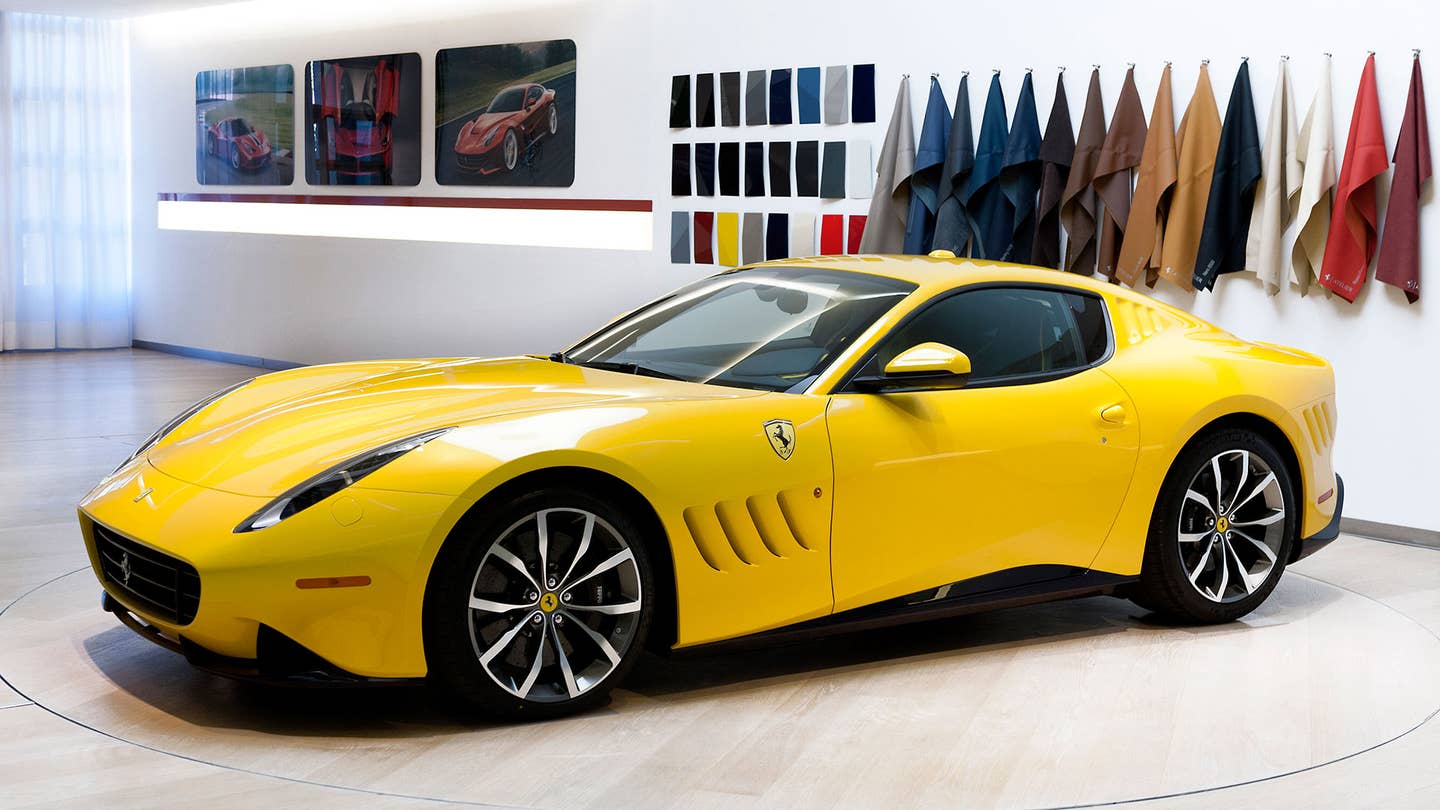 People of extreme wealth have something of a tough choice when it comes to picking between Ferrari’s pair of related two-seat front-engined V12 supercars these days. Do they go with the elegant F12berlinetta—or spring for the hardcore F12 TdF, which adds power and performance, but forces you to live with the most aggro design this side of a meth-addled T. rex? Well, if you’re really extremely wealthy, you can always just have Ferrari mold the best of both cars into one package. Which is exactly what Maranello did with the Ferrari SP275 RW Competizione.

The car made a surprise debut at the Finali Mondiali at Daytona earlier this month, appearing in the midst of several other lemon-colored custom Ferraris. Now, the carmaker has revealed more about this latest addition to its Special Projects portfolio.

While the car is based on the F12berlinetta’s chassis, the SP275 RW’s design draws heavily upon the 275 GTB of the mid-Sixties to create a body that nicely blends Ferrari’s V12 style of the past and the present. The eight gills behind the front wheels, the louvers on the B-pillar, and the oval grille are all clearly inspired by the 275 from days of yore, while the aluminum gas cap and yellow paint scheme are all influenced by the 275 GTB that won the GT class at Le Mans in 1965. The overall proportions, however, are distinctly modern-day Maranello.

But while the chassis may be from the “regular” F12berlinetta, the beating heart of this one-off supercar comes straight from the production line of the limited-edition F12 TdF. Assuming that Ferrari hasn’t made any additional changes, that means the SP275 is packing a 6.3-liter V12 making 769 horsepower and 520 pound-feet of torque. That should be fast enough to launch this one-off from 0 to 60 miles per hour in the low-three-second range.

Then again, maybe they’re only unique in the sense that they don’t come from any existing ferrari. After all, those SP275 RW headlights kind of look like the ones in these F12M spy shots...

Maranello, 21 December 2016 – Designed under the direction of Ferrari’s Styling Centre with the collaboration of Pininfarina, the latest Ferrari one-off model, the SP 275 rw competizione, is built on the chassis of the F12berlinetta but equipped with the more powerful V12 engine and gearbox from the limited-series F12tdf.

Drawing inspiration from the 275 GTB, one of the most iconic front-engined V12 berlinettas of the 1960s, the SP 275 rw competizione features a thoroughly modern interpretation of some of the themes that give the 275 GTB its berlinetta connotation, such as the quest for the ultimate balance in proportions and the pure and curvaceous surface treatment. The stance of the car, particularly in the muscular transition from the rear three-quarter panel to the wheelarch was carefully refined with a slightly wider track to express potency over the rear wheels and confer a rakish attitude.

The characteristic front engine-bay vents of the 275 GTB are an evident styling cue, as is the adoption of the triple louvres in the three-quarter panel in place of the F12berlinetta’s B-post quarterlights. The louvres on the rear bumper, together with the pronounced nolder on the tail and milled aluminium fuel filler cap, recall instead the special competition-developed 275 GTB (chassis number 06885) that won the GT category in the 1965 Le Mans 24 Hour race, coming home an impressive third overall behind the winning 250 LM. The yellow paint scheme is also a tribute to that 275 GTB, echoing its Ecurie Francorchamps team colour.

The front features a closed perimeter Ferrari grille with a prominent yet smoothly integrated bonnet bulge, while the slim, vertically-stacked headlights and forged 20” alloys are unique to this car.