It’s not what we’d call highway-ready, but it’s an eye-catching vehicle for sure. 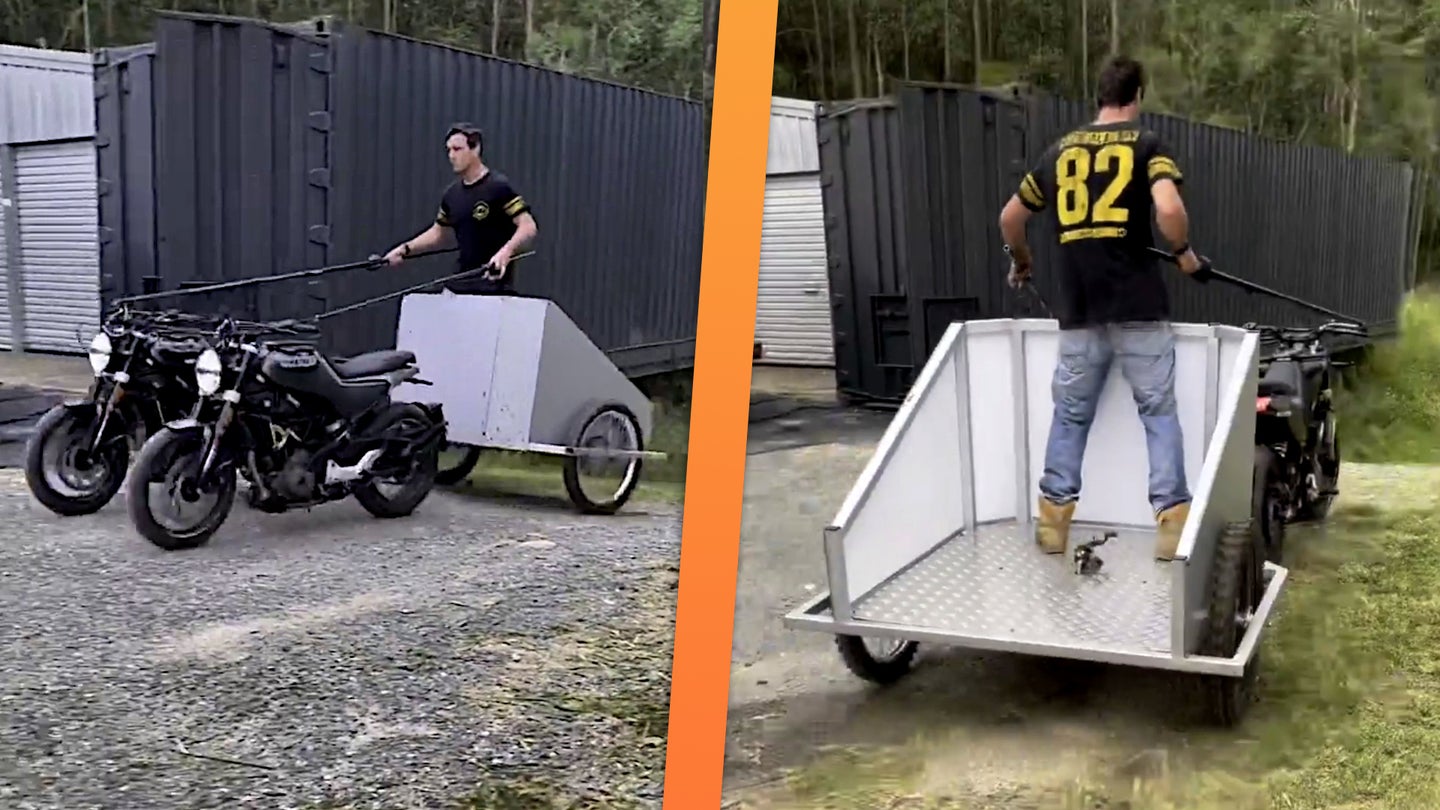 The oldest known chariots date back to around 2000 BC, with the horse-drawn conveyance once both a vital weapon of war as well as a useful means of transport. These days, the chariot is seldom seen outside harness racing at horse tracks. However, an Australian stunt performer by the name of Jack Field decided the chariot needed a comeback, this time with motorcycles instead of horses.

Field's chariot consists of a pair of Husqvarna Svartpilen 401 motorcycles, lashed together with a steel frame and pulling a two-wheeled chariot behind. Field controls the bikes with a pair of rigid control arms linked to the handle bars, one mounting a throttle, the other with a brake lever. Just like any other chariot, Field simply stands up on the platform, holding the "reins."

Motorcycle chariots have a proud history, particularly in Australia, with the sport experiencing peak popularity in the 1920s to 1930s before largely dying out. The spectacle of brave riders piloting chariots pulled by anywhere from one to four motorcycles remains a niche feature of many dirt track stunt shows and similar events. Indeed, even the Top Gear Live Show once featured a scooter chariot race featuring the show's three hosts.

Safety features don't really enter into the picture when it comes to motorcycle chariots. Any crash is liable to send the rider flying through the air into some hard surface or other. Similarly, the vehicle's awkward and limited controls only make piloting the chariot harder. These factors are likely a large part of what has conspired to keep motorcycle chariot racing from overtaking MotoGP in popularity when it comes to the world of organized motorsports. Instead, motorcycle chariot racing is more of a demonstration event, often complete with enjoyable ancient-era costuming as seen at the 1933 Police and Fireman's carnival in Sydney.

Field has long been a stunt performer astride a variety of motorcycles, performing with the Flair Action Sports team at events around Australia. The next stop for Field and his new chariot will be the Sydney Royal Easter Show in New South Wales, taking place from April 8 to April 19.

What Happens If I Didn’t Put Fuel Stabilizer in My Motorcycle?

Some snake oils aren’t worth skipping.

Here Are Our Favorite Places to Buy Used Motorcycles

Let’s get you on a new-to-you motorcycle ahead of riding season.

In the name of great Caesar’s ghost!