Not captured on video: Their almost-certain break-up. 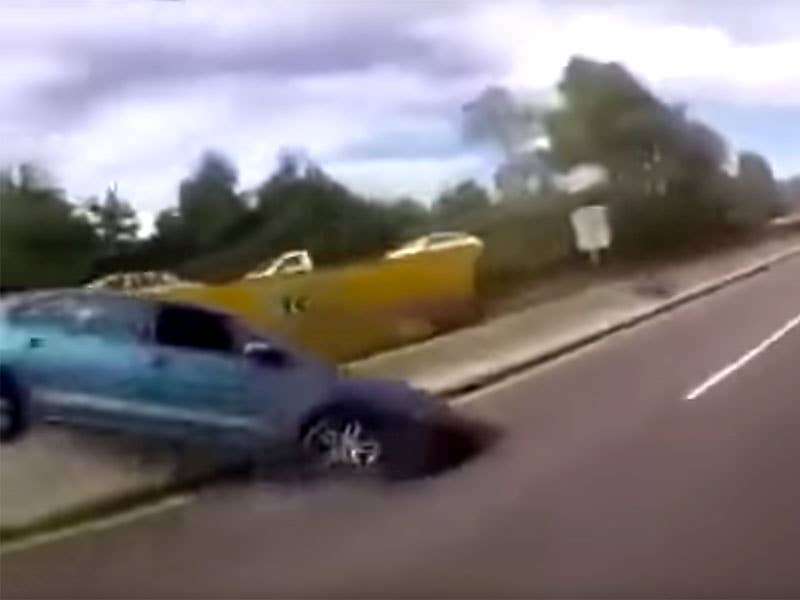 If you were making a list of the terrible, terrible things you can do to a driver while riding shotgun, pulling the emergency brake without warning would have to be near the top of the list. Seems like common sense—but apparently, that piece of obviousness evaded at least one person, who seems to have caused her boyfriend's car to crash horrifically by yanking the parking brake on him at highway speed.

The 35-second video, captured from the shaky helmet camera of a motorcyclist and uploaded to LiveLeak before being blasted around the Internet at the speed of light, reportedly comes from the city of Cuernavaca, Mexico. In the footage, a blue sedan seems to be trying to race the camera-toting motorcycle rider and his associate, when the passenger—reportedly the driver's girlfriend, according to the video's title—purportedly yanks up on the emergency brake in an effort to curb his speeding. (It's impossible to actually tell if that's what really happens, but the footage does show the rear wheels locking up, which would be consistent with an emergency brake activation.)

Unfortunately, the unexpected move sends the car out of control, causing it to slam into the center divider, flip onto its side, and pinwheel down the roadway before coming to a stop after several seconds.

It's unknown how badly the driver and passenger were injured, if at all. Considering the apparent severity of the crash, however, it seems unlikely they walked away without a scratch. Also, we hate to stereotype, but anyone dumb enough to surprise a driver by pulling the e-brake very well might be the sort of person lacking the good sense to strap on a seat belt.

Take a trip to Cubism.