One Porsche dealership loses. Everyone else wins. 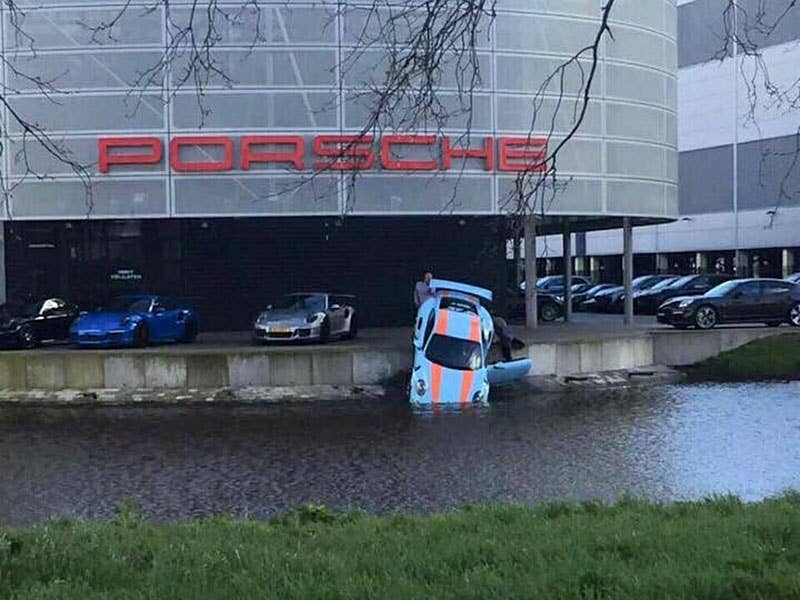 In what Batman comics of the 1950s would probably describe as "a real boner," a Porsche dealership in Amsterdam has found itself dunked in infamy after its Gulf Oil-liveried 911 GT3 RS slipped off a patio and straight into a pond—and then caught on camera.

According to Jalopnik, the employees at Porsche Centrum Amsterdam told photographer Van Veldhuijzen—who swooped in with his camera as soon as he saw the Porsche getting its beak wet—that the car rolled into the lake of its own accord while someone was applying the body stickers. Presumably because somebody couldn't figure out the difference between "P" and "N" on the 911 GT3 RS's PDK shift lever. (We hate to be the ones to say it, but, hey, if the GT3 RS still had a stick, maybe this never would have happened.)

But a bad day for central Amsterdam's Porsche dealership is a great day for the Internet. So, without further ado, we're kicking off The Drive's first Caption Contest. You can submit your caption one of three ways:

1) Leave it in the comments section, below

2) Tweet it to us—in case you're not following us yet, we're @thedrive (and why aren't you following us, exactly?)

3.) Send it to us via Snapchat, where you can find us at @the-drive

Do it fast, though. The caption contest closes at 4pm. The winner will be announced in today's Evening Rush, granting him or her a brief, shining moment of Internet glory.