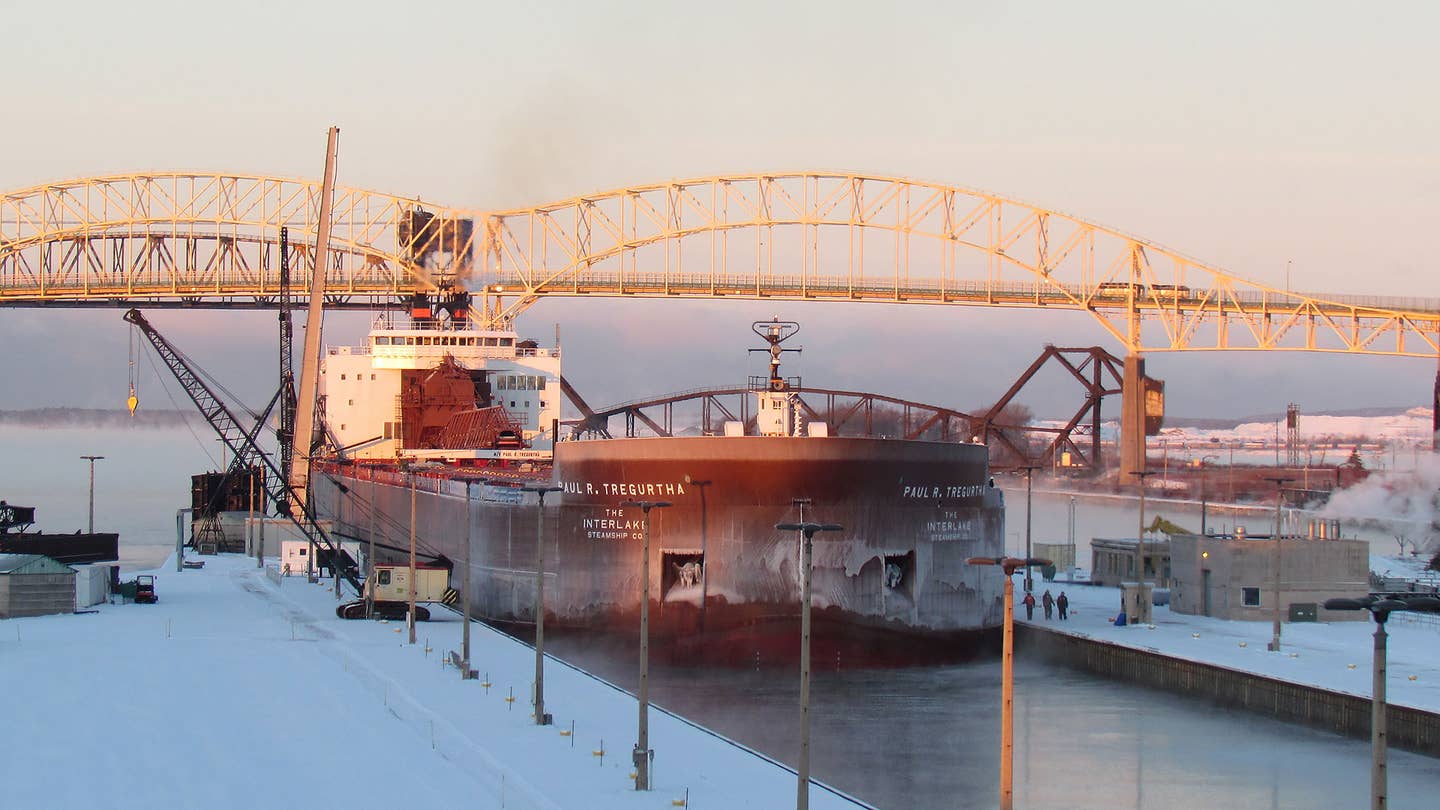 It’s called the Poe Lock. And “Nevermore” might be the operative word if Michigan’s chillier version of the Panama Canal suffered a major shutdown: Freezing automobile production, sparking a nationwide recession and putting up to 11 million people on unemployment. Not bad for an obscure strip of river atop Michigan’s Upper Peninsula, but one that carries nearly 80 percent of all the iron ore mined in the U.S.

A U.S. Homeland Security Report, obtained by The Detroit Free Press through the Freedom of Information Act, cautions that a gate failure at the 1,200-foot, 32-foot deep channel—where ships, long as four nose-to-tail 747s, are raised and lowered to negotiate the 21-foot elevation change of the St. Mary’s River—could shut it down for up to six months. Even a shorter shutdown of this engineering marvel, the only major shipping gateway between Lake Superior and the lower Great Lakes, could choke off 75 percent of the nation’s steel production within weeks, and ding the economy by $160 billion in 30 days.

Calling the Poe “the Achilles’ Heel of North American manufacturing,” the Homeland Security report says a failure would set off an economic tidal wave, virtually halting production of automobiles, appliances, railcars and other steel-intensive goods. With no viable alternatives in rail or smaller ships, unemployment would quickly shoot to nearly 6 percent nationwide and above 20 percent in Michigan and Indiana, with ripples felt in Canada and Mexico.

Freep reports that even the Army Corps of Engineers, which operates the Soo Locks near Michigan’s Sault Ste. Marie, believes the 48-year-old Poe needs big-time upgrades. The MacArthur, a second, smaller lock, can’t handle the modern 1,000-foot freighters that line up like giant taxicabs and squeeze through the Poe, supplying millions of tons of iron ore to steel mills throughout the Great Lakes.

The Soo Locks have suffered delays and closures of late, with shipping companies and manufacturers pushing for a new Poe-sized lock that Congress authorized 30 years ago but never funded. At an Army Corps hearing this year, U.S. Rep Bob Gibbs, R-Ohio, called a new lock a critical project for the nation.

“How much figuring does it take to figure out that the Soo Locks, if they go down, that’s a huge economic impact, because you can’t get into Lake Superior or the Great Lakes?” Gibbs said. “During WWII we had a garrison guarding that up there because it was so important.”

The Obama administration authorized $1.35 million last year for a cost-benefit study of building a new Poe-sized lock. Which, even if feasible, could take more than a decade at a cost approaching $600 billion.

Most people beyond the Great Lakes don't know it, but 99 percent of the iron ore used in America comes from mines in Michigan and Minnesota. That ore is turned into steel, which in turn becomes nearly $300 billion worth of cars and other steel-intensive products each year.

My family still owns land in the Upper Peninsula, and I remember my first awestruck glimpse of the Soo Locks when I was maybe 10-years old. It was so impressive that I determined to build a working model of the Poe Lock, with floating toy ships, when we got back home to Detroit. All I managed was a watery mess in the basement and a patient lecture from my engineer Dad. Who knew my misadventure foreshadowed a potential real-life catastrophe?