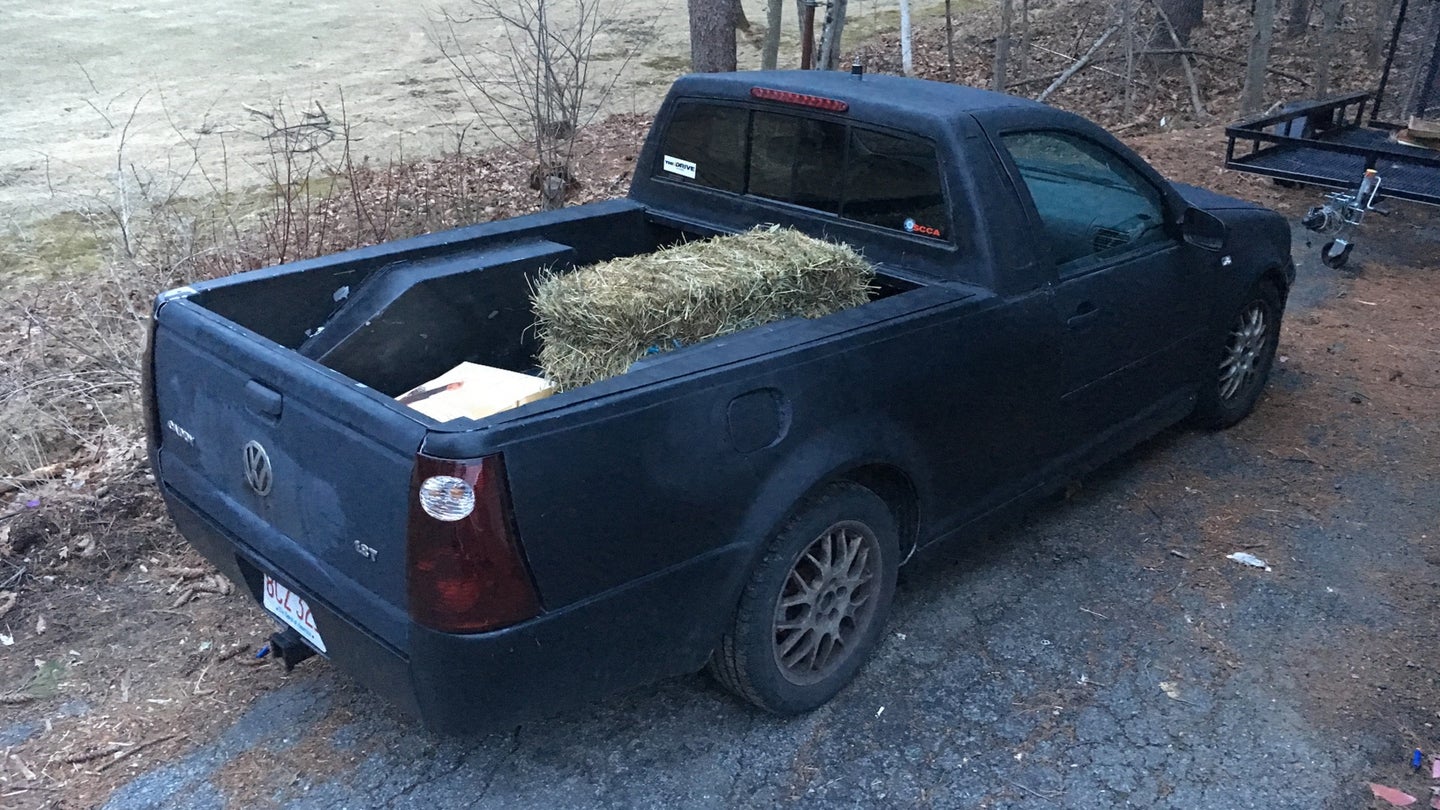 I didn't build our Volkswagen Jetta Smyth Ute just to look good. (Just as well—it's pretty ugly right now.) My wife and I use it regularly as a farm truck, transporting hay and feed with an ease that no stock Jetta, even a wagon, could match. This has always been part of our plan for this project. But now its life on the farm has gone a little too far.

Having repaired the loose bodywork, leaky turbo gasket, and arranged for the cracked windshield to be replaced Thursday, I drove the Jetta to the office Tuesday. The two-hour round trip across roads I know well and a mix of highway, city, and back roads is the perfect test loop for any vehicle. The Ute performed well. It even has a bit more power now that the exhaust is actually going through the turbo instead of leaking out upstream.

I turned onto what I consider the home stretch, Route 70 in Lancaster, Massachusetts. It's a wide open road with a 50 mph speed limit. I was just cruising along, minding my own business, when I saw movement out of the corner of my eye. The source of that movement was none other than a small brown mouse, peeking out from under the hood to look around and see what all this wind and noise were all about.

Not content with taking a quick peek, the little guy sauntered across the base of the windshield to the other side of the car, looked around, then returned to the driver's side—all this while I was still cruising down the road. I wished I had my dash cam in this car instead of the other one so I could show you this incredible sight. (I'll be fixing this soon.)

Finally my sense of surprise dissipated enough for me to realize that perhaps I should pull over and give my unexpected furry passenger a chance to disembark. I did so, but when I opened the hood there was no sign of the mouse at all. I was going to have to take a closer look at home and try to find a mouse nest.

The most common place for such a nest, the airbox, is not a factor on the Ute because it came without one. Instead, it has a "hot air intake" with a cone air filter mounted where the airbox normally goes. I doubt it generates any extra power, but it allows the turbo to make wonderful choo-choo noises, so I left it alone.

I decided to look underneath the plastic cowling at the base of the windshield, under which is a large enclosed area that would be perfect for a nest. First I had to remove the windshield wipers, which is usually easy enough. In my case, the passenger wiper was stuck on so badly that I popped part of the linkage apart. I even managed to crack the windshield while prying on it. Fortunately, I'd already arranged for the windshield to be replaced later in the week due to its other cracks. It's still a classic example of how one simple job always seems to lead to several others on any project car.

Once inside I found the accumulation of many years worth of leaves, pine needles, and other natural debris, as well as some foam insulation, on the driver's side of that compartment—directly below where the mouse had popped out. I carefully cleaned it out, hoping the mouse didn't bite me and give me mouse rabies or something. But the mouse was already gone, so no harm came to me.

I still need to fix the wiper linkage, but that's easy enough. For now, I'm going to leave the cowling and wipers off since they will just need to be removed again to replace the windshield. Miraculously, none of the wires or anything else in that compartment seems to have been chewed by rodents, and everything electrical that should be working is working just fine.

Hopefully, my unexpected passenger has moved on to live a happy life in nature that does not involve squatting in a VW Jetta.