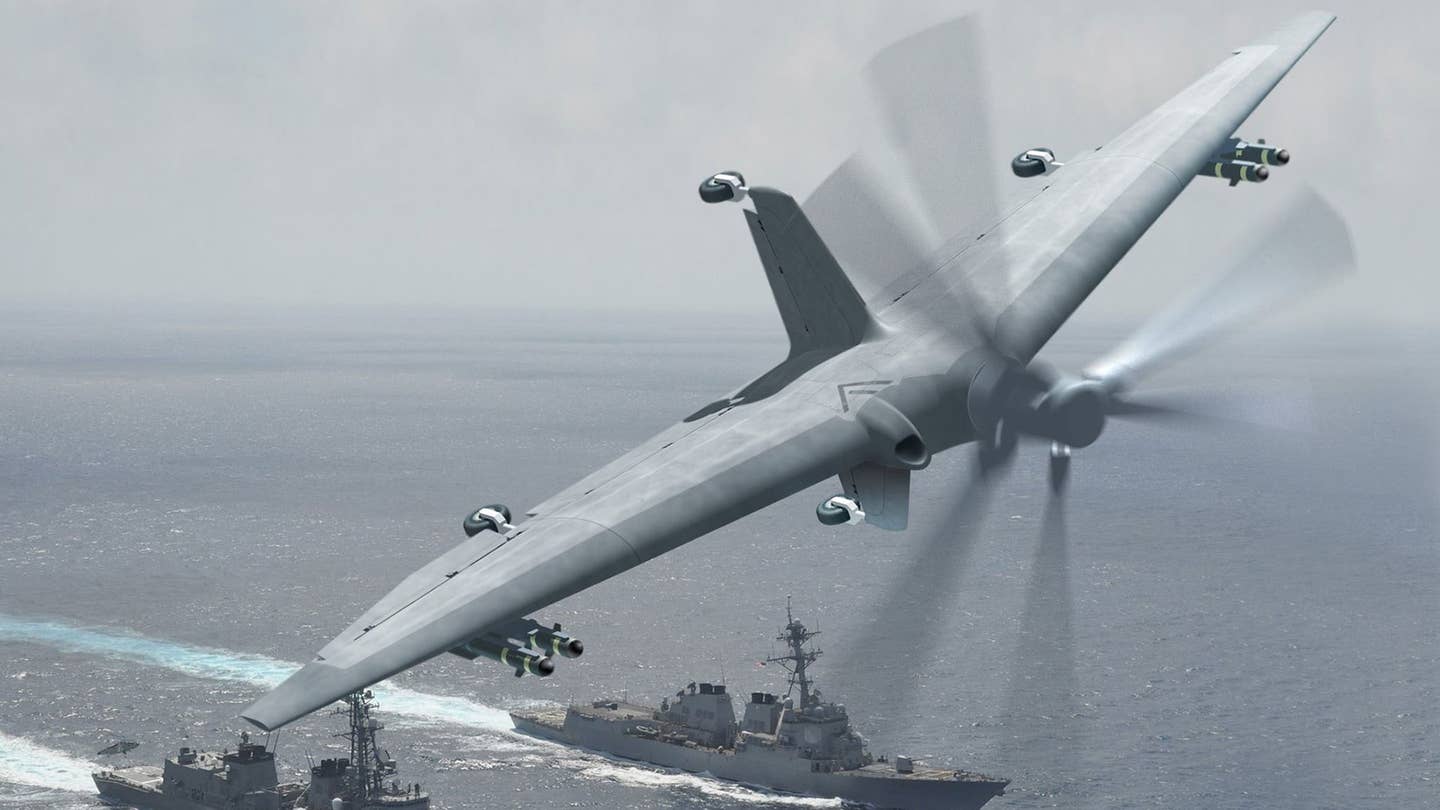 Northrop Grumman seems to have one hell of a good tone on the U.S. Navy’s drone needs. The company already locked down the contract for the Navy’s unmanned carrier-based combat aircraft with the X-47B; now DARPA (the Defense Advanced Research Projects Agency) has tapped Northrop to build a new, vertical-takeoff-and-landing (VTOL) drone designed to operate from ships without runways.

The cool thing about this new drone, though? It’s designed to take off and land on its ass.

The project is called the “Tactically Exploited Reconnaissance Node,” but since the military-industrial complex can’t resist a good seabird-based pun, it’s colloquially shortened to “TERN.” (You know somebody on the Northrop Grumman team has already ordered  “FEEL THE TERN” T-shirts.)

Northrop’s TERN, which in concept illustrations looks like a flattened B-2 with a vestigial tail, is powered by a pair of counter-rotating, co-axial propellers. Launched from vessels like the Littoral Combat Ship and the Arleigh Burke-class destroyer, it would give ships the ability to stealthily reconnoiter and strike targets from long distances.

The Navy already has a VTOL drone, the MQ-8 Fire Scout, which is essentially a small, unmanned helicopter. However, the Fire Scout is only equipped for recon; it doesn’t carry any weapons. The TERN, on the other hand, would be capable of launching small bombs, missiles, and other cool things that go boom.

This isn’t the first time the U.S. Navy has dallied around with the idea of a tail-sitter aircraft. Back in the early days of the Cold War, the Navy explored the idea of plopping a small VTOL fighter plane on the aft deck of some of their ships, to protect convoys that didn’t have the companionship of a nearby aircraft carrier.

Convair and Lockheed Martin each responded with a propeller-driven prototype, the XFY (Codename: Pogo) and the XFV (Codename: Salmon), both of which were designed to take off and land from a rocket-like vertical position. Both planes underwent flight trials during the early ’50s, but the idea was quashed by 1955. The tiny planes would have been outrun easily by conventional fighter aircraft, and pilots would have struggled to land the aircraft. Imagine backing a Countach into a tight parking space. During an earthquake.

The new generation of tail sitters, however, doesn’t have to worry about holding human pilots and their squishy, easily nauseated bodies, and modern technology should be more than up to the task of landing a small aircraft on a rolling ship deck. (If Ford can sell a Focus that can perpendicular park itself, Northrop Grumman should damn well be able to make a drone that can do the same.)

The tail-sitter drone would be a potent new fang in the Littoral Combat Ship’s maw—which would be super handy, because the LCS could really use some good news. Dogged by controversy since its inception, the LCS program has continued to pick up trouble, with its undersea minesweeping drones proving inadequate and the latest ship off the line blowing its engines after just 20 days at sea.

The survival of the underarmored and undergunned LCS (both in battle and on the budgetary chopping block) depends on its ability to detect and neutralize threats before they can strike. And the stealthy TERN would help it do just that.