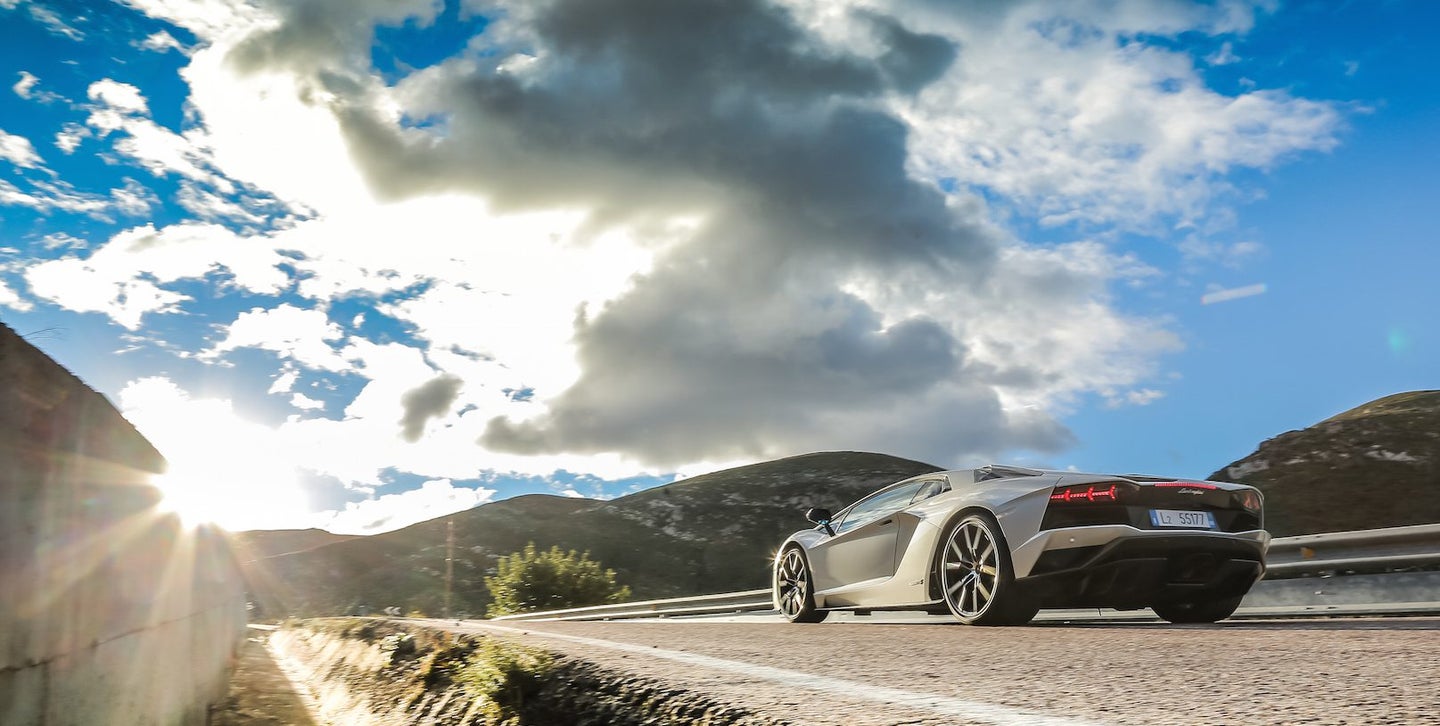 The Lamborghini Aventador is almost six years old. Can you believe that? It's more than halfway to the end of its projected 10-year product life. Seems like just yesterday we were applauding wildly the Geneva reveal of this stunning $400,000 supercar, which is wide as a Chevy Tahoe and much improved over the woeful Murleilago it replaced.

The new Lamborghini Aventador S is a midcycle refresh—and, after the Roadster and the SuperVeloce, the third major iteration—of a car that had a beautiful, naturally-aspirated 6.5-liter V12 and was always a little too big for primetime. The heft and size (it is 80-inches across and sometimes feels every inch of it) was crying out for a slimming down. A couple years back, we tested out the stripped-down speed demon Aventador SuperVeloce at the Circuit De Barcelona, and realized how much performance potential was lurking in this lovely chassis. Of course, at $540,000, the SV is in a different class.

The next-gen Aventador S is the same weight as the first one, but it manages to feel lighter. And despite two obvious flaws—it retains a crude and sometimes abusively inept gearbox, and on the racetrack I sorely missed the brake boosters built into the SV—it is a supercar that most certainly deserves to be called a supercar.

As much as I love the sound of the distinct sound of, say, the Ferrari flat-crank V8, or the Corvette's, or even the new Mercedes 4.0-liter V8, there is nothing that sounds quite so apocalyptic at full tilt as a naturally-aspirated V12 wide open.

If there's anything we don't like about this car (besides the gearbox, and, generally speaking, the owner; see below), it's the size. As I said, it's as wide, at around 80' across, as a Tahoe. More importantly, historically speaking, it drives big, especially when you compare it to the Huracan, its agile little brother. When the Aventador was first launched in 2011, all the car writers griped and moaned about its propensity to plow through corners like one of those Lamborghini tractors—a victim of poor balance and serious understeer.

Enter the new RWS system, adopted for the first time on a Lamborghini. Tt has two separate actuators that, at low speeds, turn in the opposite direction of the steering angle. In effect, the RWS shortens the wheelbase in corners. Testing the Aventador S on a racetrack on the outskirts of Valencia, Spain, I could feel the car helped through the corners—the understeer that plagued the original Aventador was gone. Even when I intentionally loaded the front tires in a turn, the managed to rotate nicely to the exit.

3. It handles much better than the original Aventador...

...But it's still a heavy car. The executives at Lamborghini were adamant that despite all the new technology in the S, the weight stayed largely the same. Here's the problem—and the problem with Lamborghinis for the past couple decades—is that when you come into a corner and brake aggressively, the back end—that wide junk-in-the-trunk tail—tends to waggle this way and that, and if you aren't completely neutral when you jam on the carbon ceramic disc brakes, you'll have to rely on stability control and the push-rod suspension to keep you from spinning sideways through the seating area of the nearest cafe.

But it's a driver's car, much more than the original Aventador. Rocketing from 0-60 in 2.9 seconds, with a top speed of somewhere are 220 miles per hour, it's hard to criticize this car by the numbers. There are four different driving modes: Strada, Sport, Corsa, and the unfortunately named Ego. Even on the racetrack, I'm a fan of the Sport mode, which protects duffers like me with just enough ESC to let me experience the joy of oversteer without the pain and humiliation of stuffing a $421,350 car into the track's gravel runoff.

4. The design still makes us swoon

Let's face it: not everyone likes the look of a Lamborghini. It can appear overly masculine, crudely angular, crassly proportioned across the ass-end. But since the unveiling of the sublime Countach (a poster of which hung on my wall for the first 25 years of my life), this design language has become the timeless silhouette of the Lamborghini. The Aventador S builds on it in increments, adding a front splitter and more jagged angles to it's already aggro nose. There are new air ducts on each side of the front bumpers that create a wake flow that carries to the rear radiator.

A revised diffuser—black, made of carbon fiber weave—on the rearend underlines a nifty three-pipe centered exhaust cluster. End of the day, it's the back end of this car that I'll remember most. I must be an ass man.

5. It actually has an Ego mode

There must have been a conversation in Sant'Agata Bolognese that went something like this:

"I think the new Aventador needs an eco mode."

It's not a novel concept: one of four driving modes allows the owner to customize the steering, traction control, and chassis stiffness to meet his own exacting tastes. The novelty here is that the name of the mode perfectly matches the primary characteristics of a Lamborghini owner. (However, I should point out that being an egomaniac is not exclusive to Lamborghini owners, but extends to owners of all supercars.)

Behind the driver's head, at the rear of the carbon-fiber monocoque, is a small divider that separates the passenger compartment from the engine compartment. By turning a small switch on the dashboard, you can open the divider and allow the full sound and fury of the 6.5-liter V12 engine fill your ears. I highly recommend this.

7. It's really an American car.

Of course it's not! Lamborghini is owned by a German company, Volkswagen, and built at Lamborghini's 150,000-square-foot factory floor in Sant'Agata Bolognese, in Northern Italy. But if you look at the sales of this marque—from the Huracan to the Aventador to the upcoming "Super SUV" Urus—it's all about the American market. Of the more than 3,000 units sold worldwide in 2016, more than 1,017 were sold in the US. The second place market—Japan, barely even registers, and China is ranked 7th, between the United Arab Emirates and Australia.

Why is that? America is rich! We have great roads! And we know what a finely crafted supercar looks like when we see one. And we want to buy them. And we do.