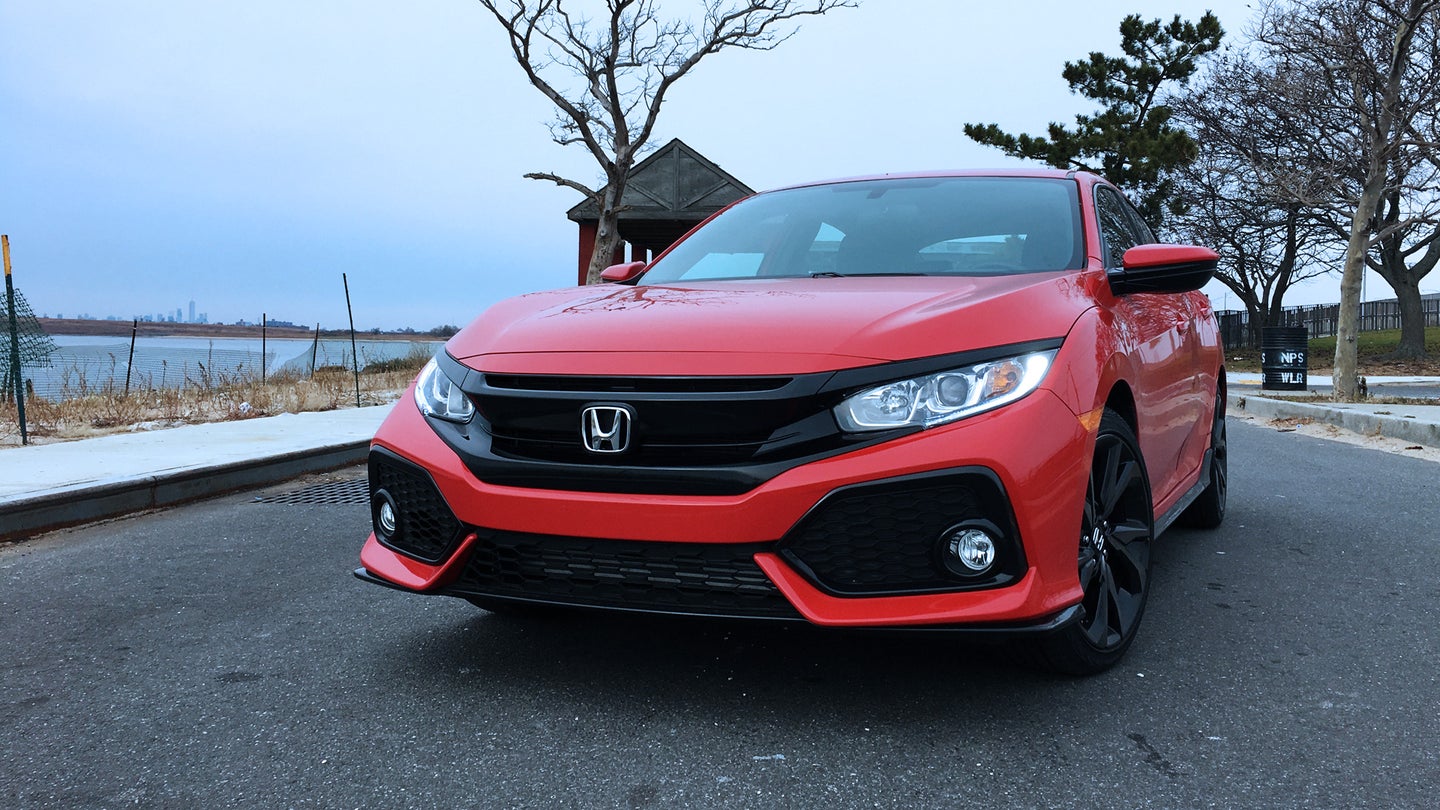 WHAT THE HELL IS IT? Honda’s return to both the hatchback segment and the cheap thrills segment of the American compact car market. It’s the automotive equivalent of a 12-pack of Miller High Life: Cheap, voluminous, and refreshing.

WHO IS IT FOR? Young people looking for a fun, stylish car they can actually afford; budget-minded family folks who don’t want to join the CUV brigade; empty-nesters who want a vehicle that makes them feel young without sacrificing practicality or economy. Anyone who wants an affordable car that serves as both dependable, efficient transportation and a zippy little entertainment machine.

WHERE DID WE TEST IT? New York City.

THE FIRST THING YOU NOTICE IS: Hot damn, this Honda is a lot of car for the money. The Sport starts at $21,300—around $12,000 less than the median price of a new car these days—but it’s packed with the good stuff. Automatic climate control? Check. 18-inch wheels? Check. Bluetooth? Check. A creamy six-speed manual transmission? A very big check.

THING THEY DON’T WANT YOU TO NOTICE, BUT YOU DO ANYWAY: It’s not as visually appealing as the Civic sedan. That car has the four-door-coupe looks of a Mercedes-Benz CLS-Class; the hatchback, on the other hand, looks like the designer watched too much Speed Racer as a child.

CAR IS GOOD AT: Being the pick of the Civic litter (at least, until the new Si or Type R arrive). The hatch’s big butt means there’s 25.7 cubic feet of space back there, giving it crossover-like space without crossover height or fuel economy. The Sport’s larger wheels, quicker steering ratio, and an extra dash of horsepower make it even more entertaining to drive than the rest of Honda’s hatchbacks.

CAR IS BAD AT: Cosseting you. The Civic handles the basics of automotive comfort well; the seats are supportive, the stereo plays loud and clear, and there’s plenty of room for full-sized humans and their stuff. But the Sport is light on luxury features. If you want leather, heated seats, satellite radio, a moonroof or navigation, you’d better look towards the top-trim EX-L or Touring models. And both of those force you to live with a (shudder) CVT.

WOULD YOU BUY IT? Not only would I buy it if I needed a car, I talked this Civic up and showed it off to friends who might be looking for a car soon. Even with the wealth of great vehicles in the compact car market these days, it’s hard to beat the Civic’s combination of versatility, value, and vroom.

DEEP THOUGHTS: I’ll admit to being a little biased when it comes to Honda Civics. My parents had a long line of them, which corresponded with the time in my life when I was starting to drive. I had lessons in a green sixth-gen Value Package sedan, and I spent most of my high school years bombing around Vermont in a blue seventh-gen EX coupe. All told, a good 10-15 percent of my happy teenage memories involve being behind the wheel of a Honda.

Bias aside, it’s still hard to argue with the appeal of this car when it comes to fun, frugal transportation. In a cheap-car world filled with generic compacts and me-too crossovers, the Civic Hatchback Sport is a car that isn’t afraid to be different. Any car guy or gal worth his keys has to respect that, if nothing else.