Yes, it's one of those slope-roofed crossovers. Get over it. 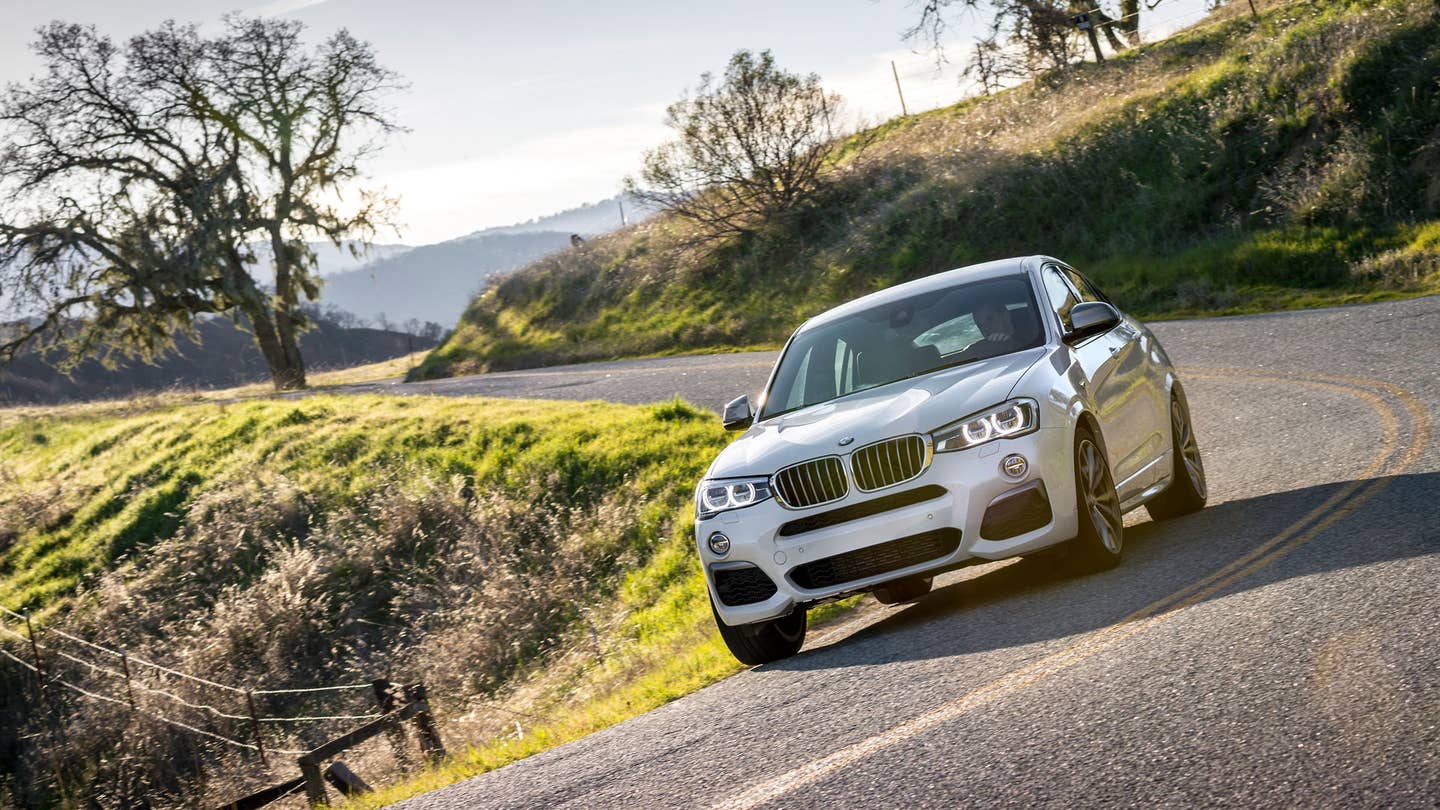 Cars can surprise you, for good or bad. And a second go-round in the BMW X4 M40i only confirmed my initial pleasant surprise, an abject surrender to this Bavarian Mr. Goodbar.

Seriously, if you’re ready to fire 60 grand at a performance car that still works for the family —the virtues that made the BMW M3 the king of a fading sedan regime—you need to drive this for yourself. The X4 M40i is not only the most satisfying crossover SUV I’ve tested this year, it’s one of the best performance crossovers I’ve driven. This German sleeper fulfills the early promise of pioneers like the original Infiniti FX and Porsche Cayenne. It’s got the taller stance, modest utility, and all-wheel-drive that Americans are voting for en masse, so it can pass muster with a significant other. Yet the BMW rejects the idea that a family car has to be a suburban death sentence. For a negligible upcharge over a Lexus RX, you could be driving this.

If the knockout BMW M2 coupe is Exhibit A, this X4 is Exhibit B: When anyone presses that familiar civil suit (possibly criminal, to hear some fans tell it) and testifies that BMW has forgotten how to build fun cars, here are two models that destroy their case.

Coincidentally, my first spin in the high-performance X4 came minutes after driving the M2 at Mazda Raceway Laguna Seca. I wasn’t expecting much, but I’m always willing to give a new car a fair shake. A few journalists turned up their noses so much that they didn’t even bother driving the X4, preferring to sniff out a catered lunch instead. Big mistake.

Starting from $59,095 smartly equipped, this X4 M40i marks the early fruit of the new M Sport line—models that have themselves drawn skeptical hoots from critics: Ah, so it’s not really a full-blooded M-division car? How can it deserve the vaunted M badge, if it doesn’t even have a stand-alone, sui generis engine?

Here’s how: This is no badge-engineered phony, but a seriously engineered performer. BMW’s 3.0-liter, TwinPower turbo six is already born for Autobahn action. The M Division massages the muscle up to 355 horsepower, but it feels more like 400 in the real world. The M-tuned, low-backpressure exhaust is a high point, blatting exhaust backfires that make an M3 sound strangled and wimpy in comparison. The double wishbone suspension is strengthened, and front-end camber is adjusted to boost steering feel and response. The eight-speed paddle-shifted transmission is smoother and snappier than some dual-clutch units, maximizing thrust in any gear: The X4 slays 60 mph in 4.7 seconds—quicker than a 360-horsepower Porsche Macan S—and keeps churning to a 150-mph peak.

Like many car testers, I’ve been boggled by the X6M, the BMW’s physics-defying cousin. But a six-figure price, 555 horses, and a Tasmanian devil attitude add up to over-the-top for many buyers. Compared with the X6M, this smaller X4 has 200 fewer horses. Game over, right? But at roughly 4,200 pounds, the X4 weighs nearly 900 fewer pounds—which means the X6M is saddled with the extra weight of four NFL running backs as it enters battle.

The X4’s looks don’t blow people away. But neither is the X4 the ugly duckling that many journalists have reflexively quacked about. The X4 does look a bit waddly at first, with that tall and ample tail. But it’s one of those cars that makes visual sense on the street, especially in crowded urban environments that bring the BMW into proper scale. After a week in New York, I realized the BMW looked . . . just fine, actually. More than one civilian complimented it, and others said they really wanted one. And honestly, how many SUV’s would you describe as beautiful, or even handsome? Most Range Rovers, a few Audis and Porsches, the Jaguar F-Pace. For these multi-use crossovers, styling is pretty much frosting on the cupcake. The cupcake’s shape, and the volume and quality of its fillings, are far bigger priorities.

Trolling for a parking space near Danji, the Michelin-starred Korean restaurant in midtown Manhattan, I happened to park the X4 in front of an Infiniti FX35. The BMW not only made the Infiniti look like weak sauce in comparison, it even managed to just squeeze into the super-tight spot. We’re talking the just-right size and efficiency that have helped smaller SUVs nearly kill off the station wagon in America, and are now taking a huge and perhaps permanent bite out of sedan sales.

The interior also impresses, even if it’s mostly a recitation of BMW’s Greatest Hits, including the fat-grip M steering wheel. The driving position and control relationships are damn near perfect, including ergonomic details that other cars and designers often miss. Reader, extend your hands into space and grab an imaginary the steering wheel. Notice how each finger curls on a tighter radius than the one above it, from index finger to pinkie. The BMW’s aluminum paddle shifters seem mathematically shaped to match that natural reach and curl.

Some writers just can’t forgive this style of crossover—which also includes Mercedes’ GLE and GLC Coupes—for their sloping roofs that steal a bit of headroom and cargo space. But the offense taken feels increasingly forced and hypocritical to me; these are the same people who’d never think to call out a conventional sporty coupe for being mildly impractical. Both the Mustang and Camaro are four inches longer than this BMW, yet they bring zero family utility, including near-useless back seats. Here’s what they’re really saying: Only I get to decide which cars are allowed to be fun. How about we let buyers decide, not the ayatollahs of automotive purity? If people want a Suburban, they’ll buy a Suburban.

My passengers had no trouble deciding. One rip through the gears, one chef-carved radius of a freeway on-ramp, and people were bowled over by the Bimmer.

Perhaps the final gloss on the X4 is that it’s not burdened by the usual BMW expectations. An M3 has to make a case as a be-all, end-all. The X4 M40i just has to be. Score one for the element of surprise. And if this X4 offers a taste of M Sport models to come, more pleasant surprises are in store.