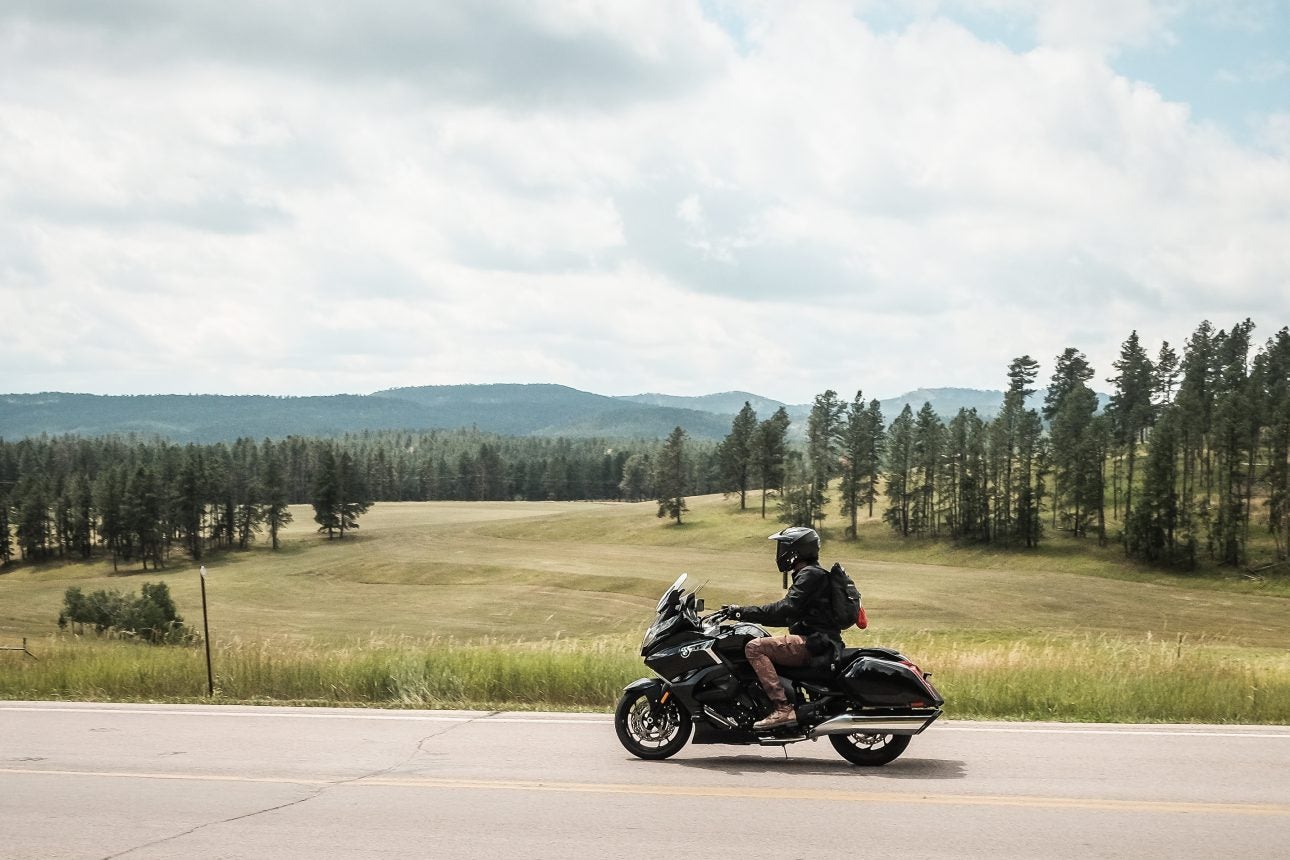 Yes, you heard right: a BMW Bagger. And where else would BMW choose to launch their new K 1600 B than at the 77th annual Sturgis Motorcycle Rally, in South Dakota. For those who are unfamiliar, Sturgis is the world's largest motorcycle rally—and almost everyone shows up on a Harley Davidson. It is a remarkable sight to see.

One might think that BMW choosing to launch a new Bagger is foolish because the cruiser continues to dominate the American market. But going right to the heart of Bagger / Touring / Full Dresser motorcycle country just might be a brilliant endeavor, and I had an exclusive opportunity to take a BMW K 1600 B out for half a day around Sturgis, with no supervision or hand-holding, in advance of the national press launch.

Walking up the K 1600 B you will immediately notice a few design details that have been ported over from its touring sibling, the K 1600 GT. The most obvious is the front end. The fairing, headlight, infotainment / dash display, and hand controls share the same DNA, but as you move toward the rear, everything begins to change. The chassis was reengineered to house BMW's inline six-cylinder engine, giving the K 1600 B a much lower ride height and longer wheelbase.

The K 1600 B would not be a Bagger without the iconic hard shell side bags. To emphasize seamless design and function, BMW integrated the rear brake lights, turn signals, and hazard lights into those rear cases, and the lines match up nicely to the original "Concept 101" mock ups BMW released a couple years ago. I personally like it a lot—it looks like a combination of that awkward Tetris piece and a vampire fang.

The bags can be locked from a switch on the handlebars or via a key lock on each bag. Storage capacity looks ample, but until I take one out for a proper road trip, I can't speak to their versatility.

Just under the bags lay the Euro 4-compliant exhaust pipes. While a tad bulky, the slash cut tips manage to add the right aesthetic finish to the back end.

Aesthetics and design aside, the big question, obviously, is: what is this Bagger like to ride? For four hours, I cruised around Sturgis, headed south toward Nemo, and cut up to Deadwood and back. Our route consisted of beautiful straight highway, robust sweepers, and some tight technical turns on a couple back roads.

The K 1600 B features the same 1,649cc inline six-cylinder engine found in the GT and GTL models. The K 1600 B puts out 160 hp at 7,750 rpm and 129 ft-lb of torque at 5,250 rpm. Weighing in at 749 pounds, one might think there's a sacrifice in performance, but no. Dead wrong, in fact. Throttle response is smooth, immediate, and sharp.  Shifting is sublime courtesy of the hydraulic clutch, and not once did I miss a shift. From a stop, the K 1600 B rockets to 60 mph faster than I care to count. 70 percent of the torque is available around 1,500rpm, and with just another twist of the wrist, the bike keeps accelerating. The model I rode came with BMW's Shift Assist Pro, so hammering through the gears without needing to pull on the clutch lever made the K 1600 B feel more like a sport bike than a big, heavy Bagger. Because my bike was set up with the premium package, it also included BMW Dynamic Traction Control (DTC) throttle modes: Rain, Road, and Dynamic (which should just be called "Sport"). I wanted all 160 ponies on tap, so I left the throttle map in Dynamic mode for most of the ride.

The K 1600 B will raise your pulse and force ear-to-ear smiles. It pulls hard and quick, a thoroughbred shooting out the gates at the Kentucky Derby. It's character is very different than the cacophony of V-Twins echoing through the Black Hills; the exhaust note on the K 1600 B is more sporty, and whines at as it spools up to full throttle.  What it lacks in bass, it makes up for in pure performance and a near silent, vibration-free ride when cruising along at 85mph in sixth gear.

Bagger looks, touring capability, and sport bike-like performance: the K 1600 B rides like it's on rails. Turn-in is magnificently intuitive and effortless. A simple input to the bars with a touch of body lean and you'll forget what kind of bike you're on.

Ground clearance on the mid-mount foot pegs is generous, and will be more than adequate for anyone considering this machine. Those looking for a spirited ride will find the max lean angle when shredding through tighter curves.

The BMW K 1600 B has two suspension settings that can be easily selected from the control dial on the left handlebar. "Road" and "Cruise" modes are controlled by BMW's Dynamic ESA suspension and a separate ECU. It works constantly, adjusting preload and dampening according to a variety of sensors found on the bike, and how the bike is being ridden. Additionally, each mode will calibrate for the individual weight of the rider, as well as take into account if you are carrying a passenger, and/or cargo.

In "Road" mode, the front and rear become firmer, allowing for more road feel—perfect for more aggressive or spirited riding. For most of my ride I kept the K 1600 B in the that setting. It did an excellent job at making the bike feel tight and planted, with excellent feedback when hustling through broad sweepers and tight corners.

In "Cruise" mode, the suspension softens noticeably and what was one a taut, sport-touring missile became a rocket-powered cloud capable of absorbing bumps and road imperfections. The "Cruise" setting is exactly what you want for those arduous days on long highway runs or beaten city streets.

Both modes are vastly different, but having the option to switch suspension settings on the fly gives this Bagger two unique handling profiles.

A big bike is going to need some powerful brakes to bring all that mass to a dead stop. The K 1600 B utilizes four-piston, 320mm dual discs in the front and a two-piston, single 320mm disc in the rear. During a few hard braking tests from 70 mph to a dead stop, I could barely notice the system firming up the front suspension and softening the rear. I couldn't "feel" it working, but I definitely knew it was The ABS also presents as very smooth with minimal chatter. Coupled with that ABS and the ESA, the K 1600 B feels very refined.

Ergonomics can always be a tricky thing for manufactures, because riders come in all shapes and sizes.

I'm a tall man—6'5," to be exact—and not all motorcycles fit me. I've come to expect some level of discomfort one way or another, but bigger bikes always fit me better.

As with most BMW models, the BMW K 1600 B has three saddle height options: low, regular, and tall. My bike was fitted with a tall seat; it felt soft and comfy from the first, and remained so throughout most my ride. By the end I noticed a little discomfort, but none of consequence. However, a couple people I spoke with who rode out from Kanas City to Sturgis on the K 1600 B said the stock saddle would begin to experience signs of "hot spots" around the 100-mile mark. To date, I've never experienced a stock saddle that fits all posteriors, so an aftermarket version would be an absolute first upgrade for anyone looking to put on serious highway miles.

With the taller saddle installed, I found the mid-mount foot-pegs to be incredibly comfortable and confidence-inspiring when it came to controlling and balancing the K 1600 B in slow speed maneuvers, and moreso during aggressive cornering. BMW has also outfitted the K 1600 B with a handlebar that not only looks custom, but also pulls the controls rearward by a couple inches.

The electronically-adjustable windscreen looks great and I would suspect it will work great for regular-sized and shorter individuals—but even at its highest setting, I experienced considerable wind noise. When I returned the bike, I walked over to the K 1600 GT that was outfitted with BMW's taller windscreen. The mounting points found on the K 1600 B look to be identical, so I would not be surprised if they could be ported over directly. (I was unable to get BMW to confirm this before publication.)

My last gripes with the K 1600 B would be the stock audio system. It's not loud enough at highway speeds when you factor in a full-face helmet and shield in the closed position. But, I suspect that BMW will work closely with Harmon Kardon to create a premium audio package capable of rocking AC/DC so loud you'll be able to wake the dead in the next county.

The BMW K 1600 B starts at $19,995, but my advice would be to opt for more premium features like the DTC throttle modes, shift assist pro, reverse assist, adaptive headlights, audio system, and highway floorboards.

BMW is taking a gamble by dipping their toe into a market dominated by Harley Davidson, but on its merits, the K 1600 B is a beautiful, performance-oriented Bagger with all the capability one would expect from Bavarian Motor Works. Harley owners won't be giving up their bikes anytime soon, but after talking to a lot of Harley riders yesterday, many have shown interest in having a K 1600 B in their garage.

Sam Bendall is an editor-at-large in the motorcycle and automotive industry. He is a man of many talents, but what matters most to him is his family, his coffee in the morning, and his whiskey at night.