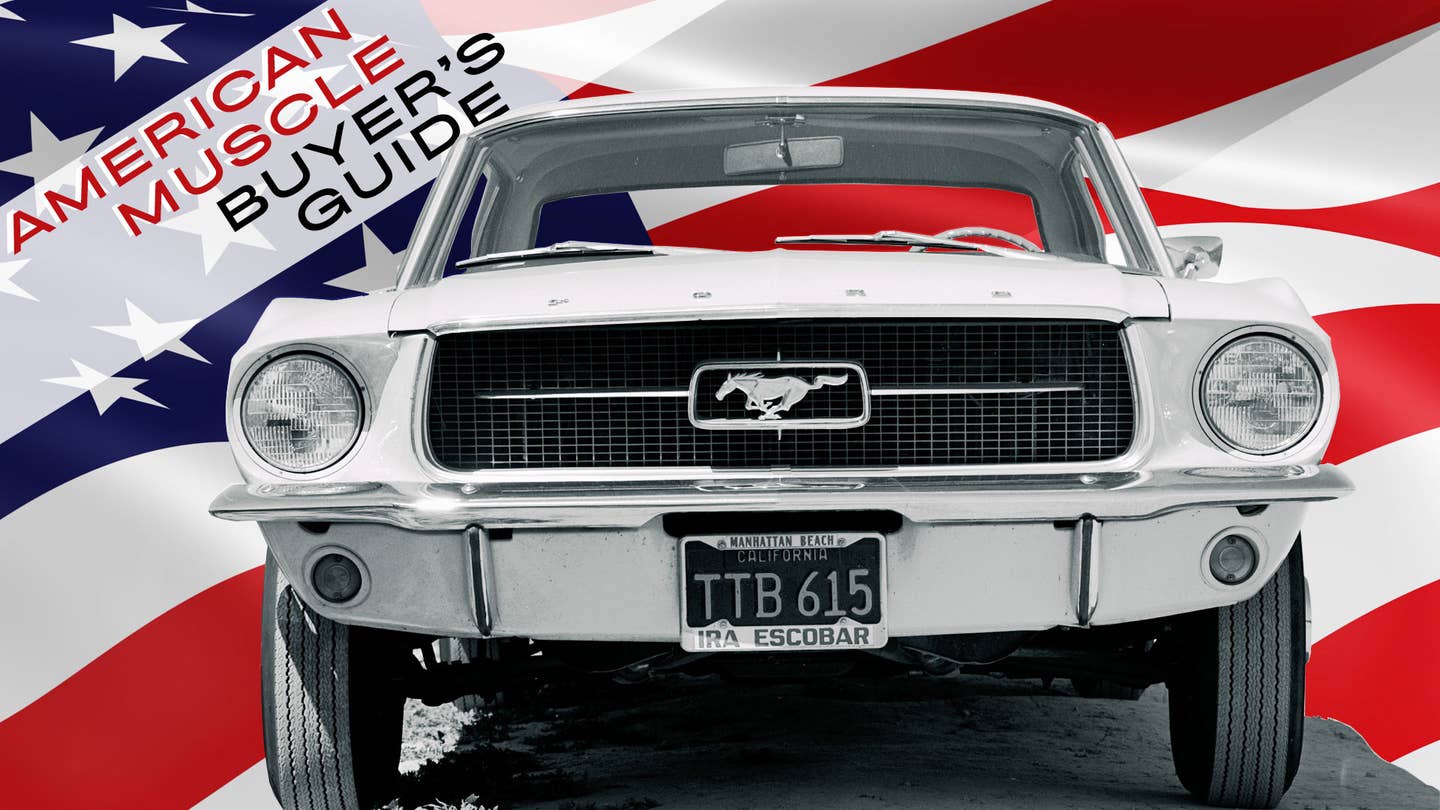 It’s best to be a bit cynical about the classic muscle car market. These aren’t cars hand-built in race shops to win world championships. Craftsman didn’t obsess over shaping the perfect fender, the paint was never sprayed on to retain its luster for generations, and the engineering was primitive, even by the standards of the era. And yet muscle cars embody the hopes and aspirations of, well, at least a couple of American generations now. Of course you want one. Or several.

So you’re aiming to enter the muscle car market. We're here to help. First, let’s clear up a few things.

What is a muscle car, anyway?

The classic muscle car era runs from the introduction of the big-engine 1964 Pontiac GTO and ends as the 1972 model year and high-compression V8s passed into history. Muscle cars are always North American-made and are defined more by how they were marketed than by any feature they possessed. They were sold as exuberant expressions of the baby boom generation that at that time was emerging as the richest, largest and most self-obsessed demographic the US had ever known.

None of this should be taken to mean there’s a hard-and-fast rule about what constitutes a muscle car. Some will include the Shelby Cobra and Chevrolet Corvette as muscle, while those of us with our heads screwed on right know that they are sports cars. Big cars like the 1966 Ford Galaxie 7 Litre push the muscle envelope, but it was marketed more as an executive express than a youthful warrior. And while the muscle era ended in ’72, one of the greatest muscle cars ever was the Pontiac Firebird Trans Am powered by the Super Duty 455 V8 produced from 1973 to 1975. So let’s keep it loose.

1. 1970 Pontiac Grand Prix Hurst SSJ—Pontiac downsized the Grand Prix from full-size to mid-size for 1969. And then Hurst Performance took a few and added some flamboyant gold and white paint and a padded vinyl roof with sunroof. Only about 272 were made for 1970 and a few more in ’71 and ’72 for a total of 489.

2. 1967 to 1969 Plymouth Barracuda—Collectors have long gone nuts for the later E-body 1970-1974 Barracuda. But the A-Body Barracudas just before that generation are great looking cars and are still affordable. Forget the ’64 to ’66 Barracuda, which was merely a Valiant with a fishbowl bolted to the tail.

4. 1971 AMC Hornet SC/360—American Motors made only 784 of these compact two-doors powered most often by a 285-horsepower, 360-cubic-inch V8. Of course, owning one means being an AMC guy and that comes with some serious car geek stigma.

5. 1970 and 1971 Pontiac Tempest GT-37—This was Pontiac’s obscure answer to the Plymouth Road Runner. A cheap Tempest (pillared two-door coupe or pillar-less hardtop) overstuffed with Pontiac’s 350 or a pair of 400-cubic-inch V8s, including the potent Ram Air III. Rare? Sure.

1. 1970-1971 Plymouth Hemi ‘Cuda—No doubt an interesting car, but stupidly expensive now and always a bear to drive on the street. The 440-powered ‘Cudas were better cars to drive if you insist on owning an enormous-engine E-body.

2. 1970-1975 Ford Maverick Grabber—The Maverick had a pretty fastback shape, but it was cheaply built even by muscle era standards. At first they didn’t even come with a glovebox. So don’t get fooled.

3. 1968 Shelby GT500—Carroll Shelby was out of the Mustang business by ’68, so the GT500s were produced by Ford using the 428-cubic-inch Police Interceptor V8 with 360 horsepower. A nose-heavy yawn. And the cheesy “Eleanor” replicas built in tribute to the icky Gone In Sixty Secondsremake are a joke.

4. 1969 Dodge Charger Daytona—Built to race in NASCAR stock car events, the Daytona was brilliant on superspeedways like Daytona and Talladega. But as a road car, the nose was ridiculously long and that rear wing was just silly. Yeah, the same goes for the Plymouth Superbird too.

5. 1964 Pontiac GTO—Yeah, it was the original muscle car. But that 325-horsepower 389 V8 in its nose was no great shakes. Tested by Motor Trend in their January 1964 issue, a four-speed GTO convertible ran the quarter-mile in 15.8 seconds at 93 mph. A bog standard 2016 Honda Civic powered by a 2.0-liter four with a six-speed manual transmission will match that. Pathetic.

Muscle cars are simple beasts that are easy to work on. But best of all, they’re so familiar to and beloved by so many of us that it’s easy to rope our friends into helping maintain and restore them for little more than a case of Keystone Light and a couple of DiGiorno pizzas. Social skills are vital skills.

Don’t shirk on insuring your muscle machine. Companies like Hagerty specialize in insuring classics (usually on a “stated value” basis) and that can be critical should something happen to your freshly restored ride. Don’t just put the car on your regular auto insurance policy without first consulting your agent about how it will be covered.

Finally, the grim truth: The earliest members of the baby boom generation are now hitting their eighth decade, and they’re soon going to be hitting the end of their actuarial relevance. You know, dying. So some of the best deals on already restored, long cherished muscle cars will be through estate sales. Start searching those.

There are literally dozens of magazines dedicated to the muscle car obsession. Hundreds of websites, too. And there are millions upon millions of opinions.

Start, however, with Hemmings Motor News that is both the largest online marketplace for all things old car and a strong editorial resource for exploring all the trivial elements that make muscle-headed mania worthwhile. With its listings for cars, parts and flotsam, this is where you can get a feel for the market.

Barrett-Jackson runs auctions around the country—you know, the ones that get shown on cable TV—but it also maintains a thickly stocked website containing auction results that go back at least 10 years. These auctions can be absolutely stupid when it comes to pricing, but their accumulated history is a good snapshot of how the muscle car market moves over time.

And remember, with muscle cars we’re talking about fragile antiques. So even though swap meets and junkyards may seem archaic in the digital age, they’re still absolutely relevant today. Don’t shy away from them, or local car shows either. It may be that the guy you bond with at the taco truck may have the killer leads on the good stuff in your local neighborhood.