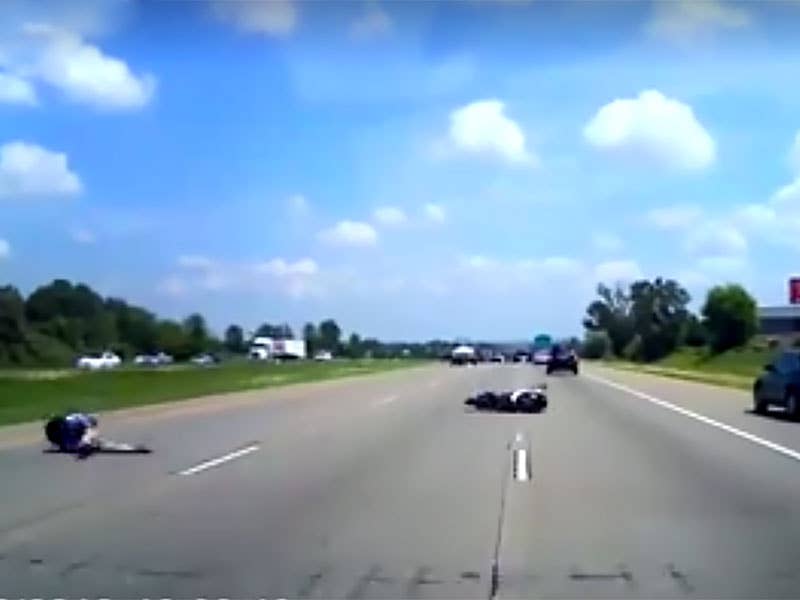 A motorcyclist in Minnesota found himself thankful he'd recently purchased a protective jacket after a sudden impact with a roll of foam sent him tumbling off his bike and onto the busy freeway—and it was all captured on crystal-clear dashcam video by a following vehicle.

Local news station KMSP Fox 9 reports Brendan Jankowski, 20, was riding his motorcycle home when a huge foam float pad fell off a boat being towed in front of him. Jankowski attempted to avoid the lost load, but to prevent getting hit by other motorists, he minimized his swerving and tried to go as far to the right side of his lane as possible. As you can see below...it didn't work.

After hitting the foam pad almost directly head-on, Jankowski's bike was propelled in the air and he was thrown to the ground, skittering across the highway before coming to a stop several yards away from his fallen motorcycle.

Jankowski told Fox 9 in addition to a riding helmet, he was wearing a motorcycle jacket—which he purchased just an hour before the incident occurred.

“I just bought the jacket that day thinking I’d come back next week and get the gear and have the full set,” Jankowski said. “I happened to use the jacket I just bought to help save me quite a bit of pain.”

The news station reports police believe the driver of the vehicle towing the boat may have not realized that he dropped the foam pad. As of Tuesday evening, law enforcement had been unable to track the driver down. Anyone who spots a sheepish-looking person attempting to buy a foam boating pad is encouraged to contact the Minnesota State Patrol.