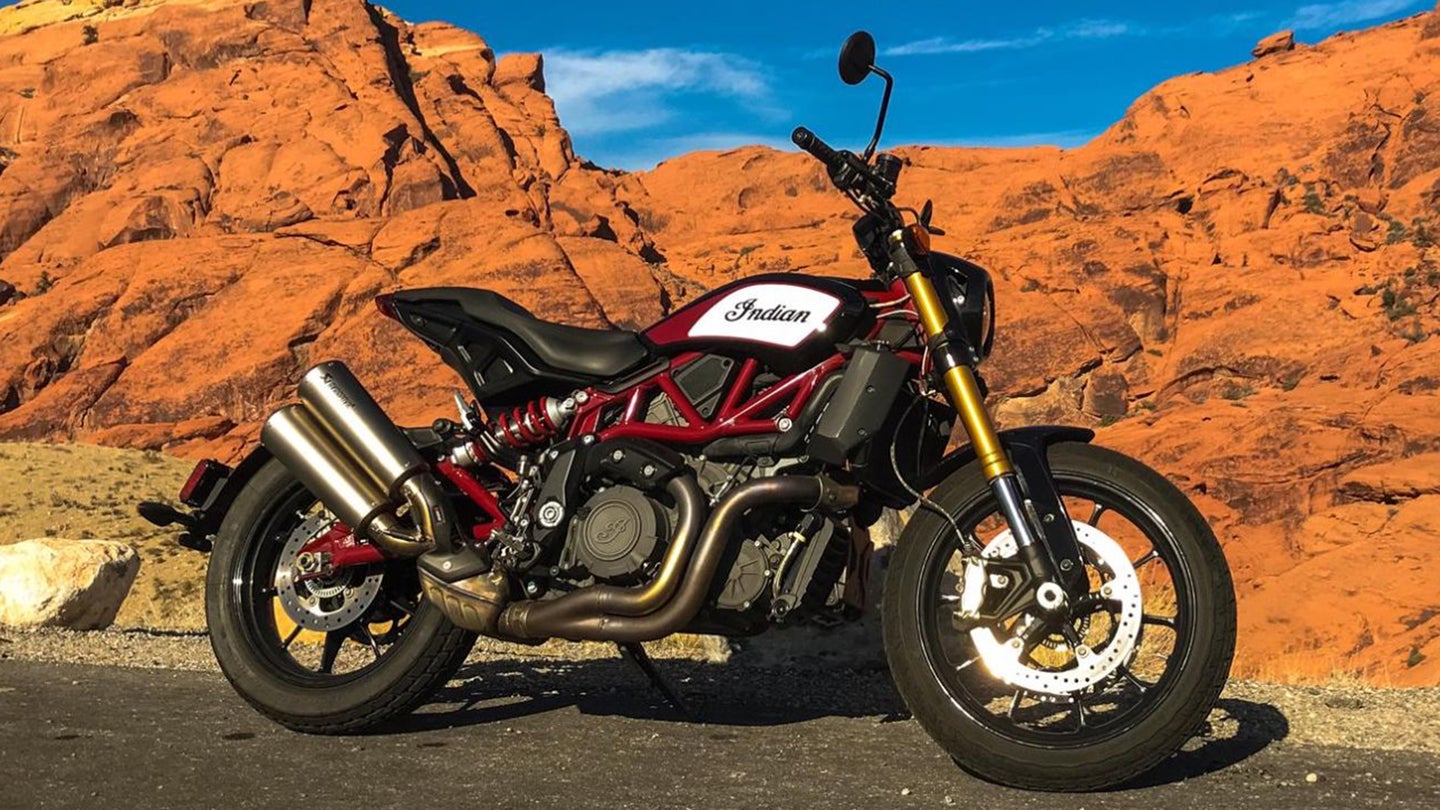 I’ve been waiting for the 2020 Indian Motorcycles FTR1200 S for what seems like a decade. Indian commenced with the public teasing a few years ago, taking inspiration from Field of Dreams: If you build it, they will come. Except it was the other way around, Indian tantalizing us with a street-legal concept of the company’s FTR750 flat-track race bike to be offered to the general public. I remember the drool the news elicited.

A year went by, and finally the FTR1200 S arrived. I was shocked to see how true to that design the production motorcycle was. I devoured the specs on its release and even traveled to Germany for its unveiling, gazing at it longingly from afar. Indian had me hooked. This January, my chance for some seat time finally came with a hastily planned ride around Las Vegas, Nevada.

I didn’t have long, nor a thoroughly mapped route. The only imperative gripping my psyche was that I take this super hooligan, a motorcycle steeped in old-school Americana, away from the glistening monument to gluttony that is Vegas and ride off into the desert sunset—a romantic notion few get to indulge on the regular.

Luckily, another era exists just outside Sin City. Out past the strip joints, dispensaries and clanging slot machines, the shiny and soulless Las Vegas fades away and the American Southwest continues its grand tradition of untamed wilderness. Out of reach of WiFi and cell service, you’ll find yourself lost on unkempt trails, rocky ridges, desert roads, and in the shadows of towering limestone cliffs of the La Madre Mountains. The perfect locale to commune with the right machine.

And God, was this bike worth the wait.

Stagger the FTR1200 S and its race-ready FTR750 sibling alongside each other and the uninitiated will have a tough time telling the two apart. The motorcycles, apart from a few key differences, could be identical twins, featuring the same upright seating, grooved tires, gold shocks, bright-red swingarm and V-twin engine design. Indian’s promise for a race bike for the streets definitely gets a big checkmark here.

The street-legal FTR1200 S uses a 1,203cc V-twin engine that produces 123 horsepower and 87 pound-feet of torque. Power is sent through a six-speed sequential manual transmission to the rear wheel and is more than enough for its kind-of-hefty-for-a-naked-bike 497 pounds. 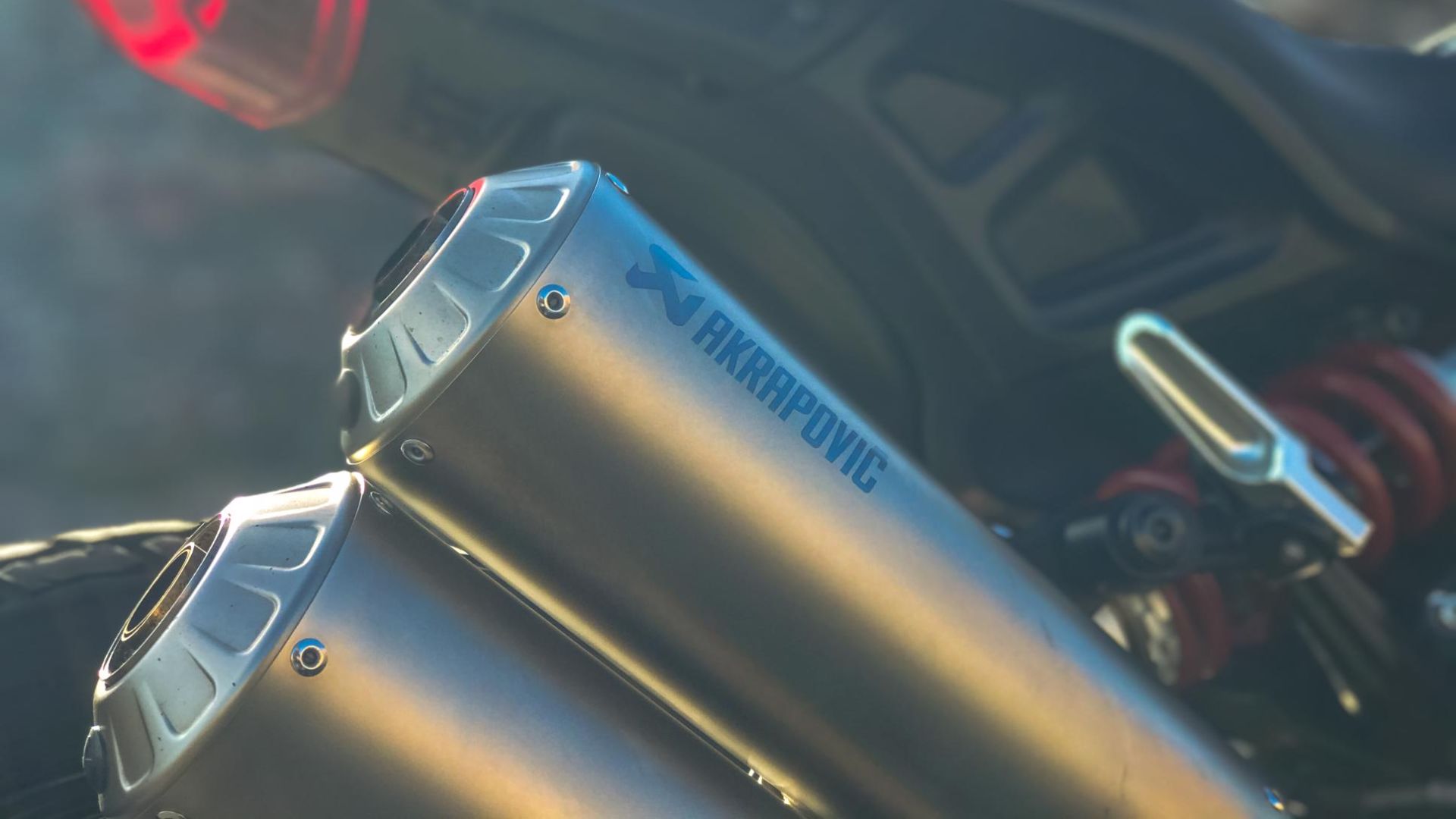 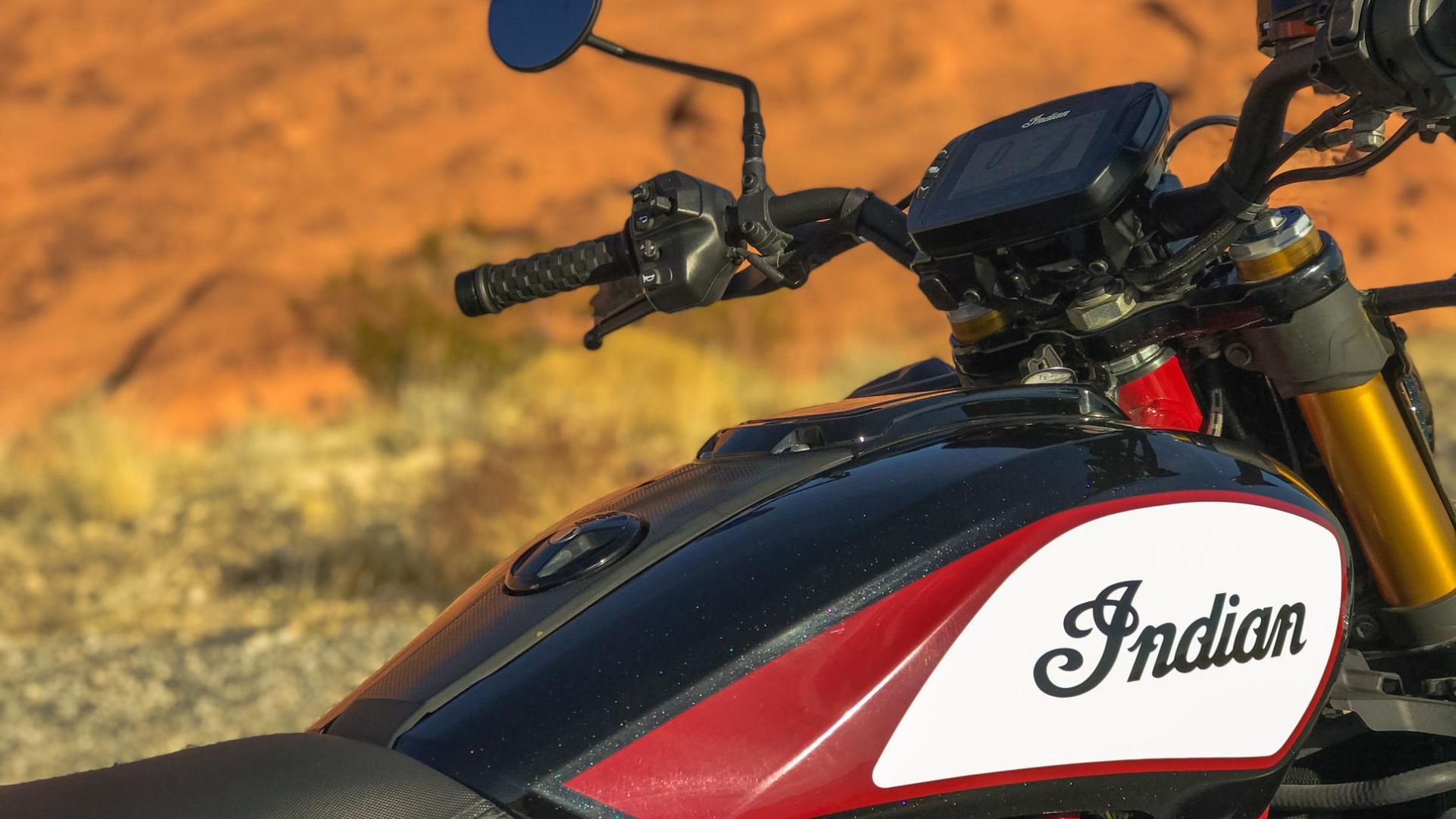 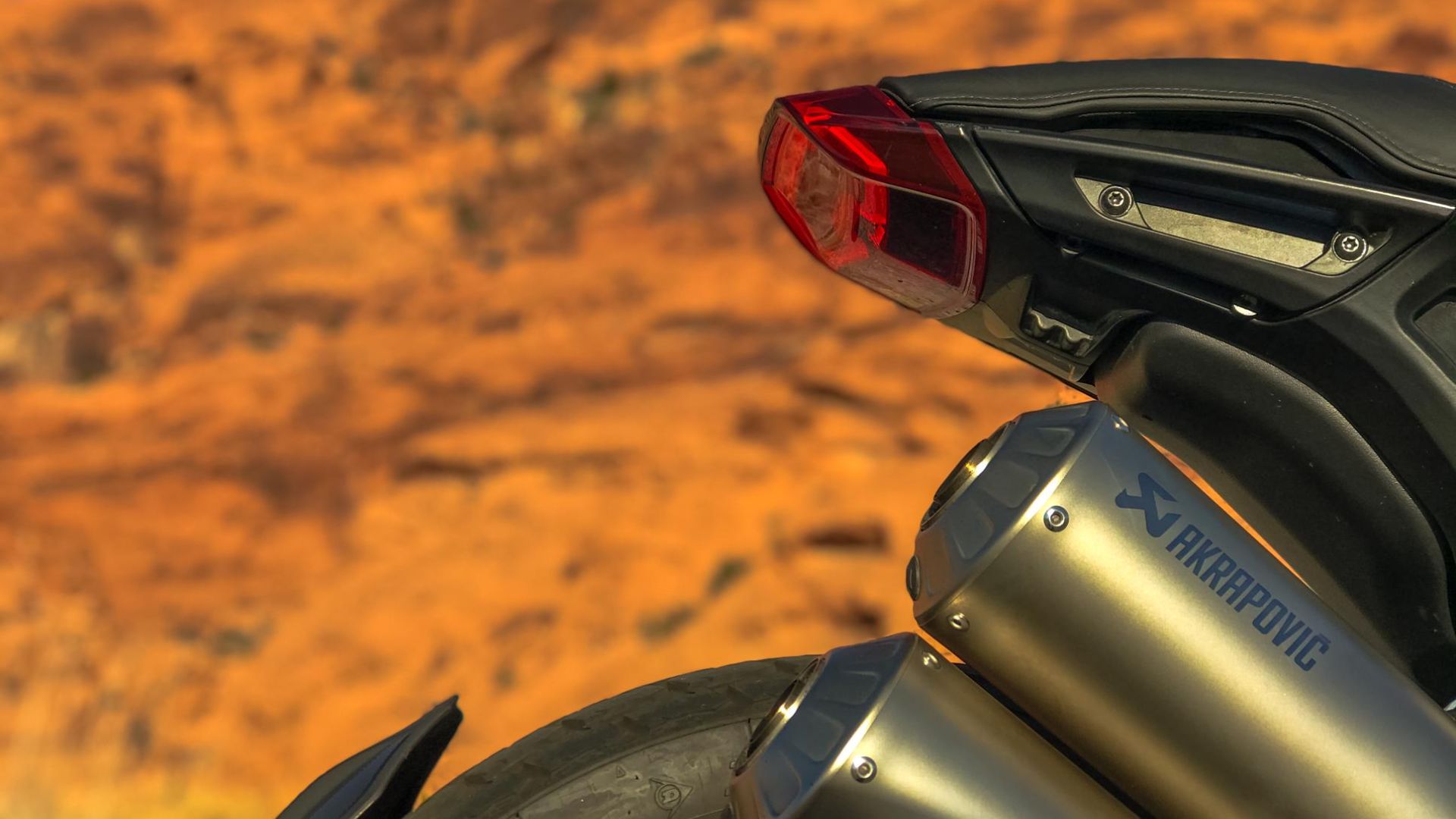 Underneath you sits a trellis frame wrapped around that glorious V-twin engine. Fully-adjustable shocks mounted front and rear give the FTR1200 S nearly six inches of suspension travel, while dual four-piston calipers at the front and a single two-piston caliper at the rear halt the motorcycle’s forward momentum. On my particular FTR1200 S, an optional Akrapovic exhaust that I’d highly recommend offered up a Subaru-esque UEL idle and a throaty growl under load.

There’s also 4.3-inch color touch screen display between the handlebars that lets riders toggle through the motorcycle’s riding modes, and it works beautifully even with a glove on—hear that, car manufacturers?

But enough of my yammering about its specs, let’s talk about how this baby rides.

Throttle cracked, the FTR 1200 S might as well be a jackrabbit, hopping up and down every time the whim to wheelie enters my mind. On the highways leaving the city, the same wheelie-popping V-twin pushes savagely through the gears, clipping extrajudicial speeds in the blink of an eye. There's only one glaring issue: the veracity of its claimed performance.

But this isn't a case of exaggeration, thankfully. Rather it feels like Indian is taking a page from certain German sports car manufacturers and devaluing the bike's oomph—my highly scientific, MIT-calibrated butt dyno senses it's underrated by about 25-ish horsepower. This could also be a case of engineers shifting and concealing excess weight, but either way the FTR1200 S bites harder than the spec sheet suggests.

Red Rock Canyon National Conservation Area is a breathtakingly beautiful mix of the limestone cliffs and oxidized sandstone, and it’s only twenty minutes outside the Strip. Snaking its way through the natural formations, a single-lane road offers visitors access to hiking trails, camping, and an introduction to the surrounding geology. It’s also wonderfully twisty, whereas much of Las Vegas' street grid isn’t. And though the speed limits are low, pop into the park at the right time of day and you’ll have it almost exclusively to yourself.

Here, it's clear Indian's made the FTR1200S feel as uninhibited as possible. It might be 50 to 100 pounds heavier than the average naked, but the extra heft inspires confidence the same way driving a Rolls-Royce Cullinan through a blizzard would. Regardless, the center of gravity feels impossibly low for something still powered by dinosaur bones. Drop a knee and you'll forget it was originally designed for powering around a dirt oval and not carving canyon roads. That said, it could be further improved with a set of sticky sport tires instead of its flat track-inspired grooved rubber. 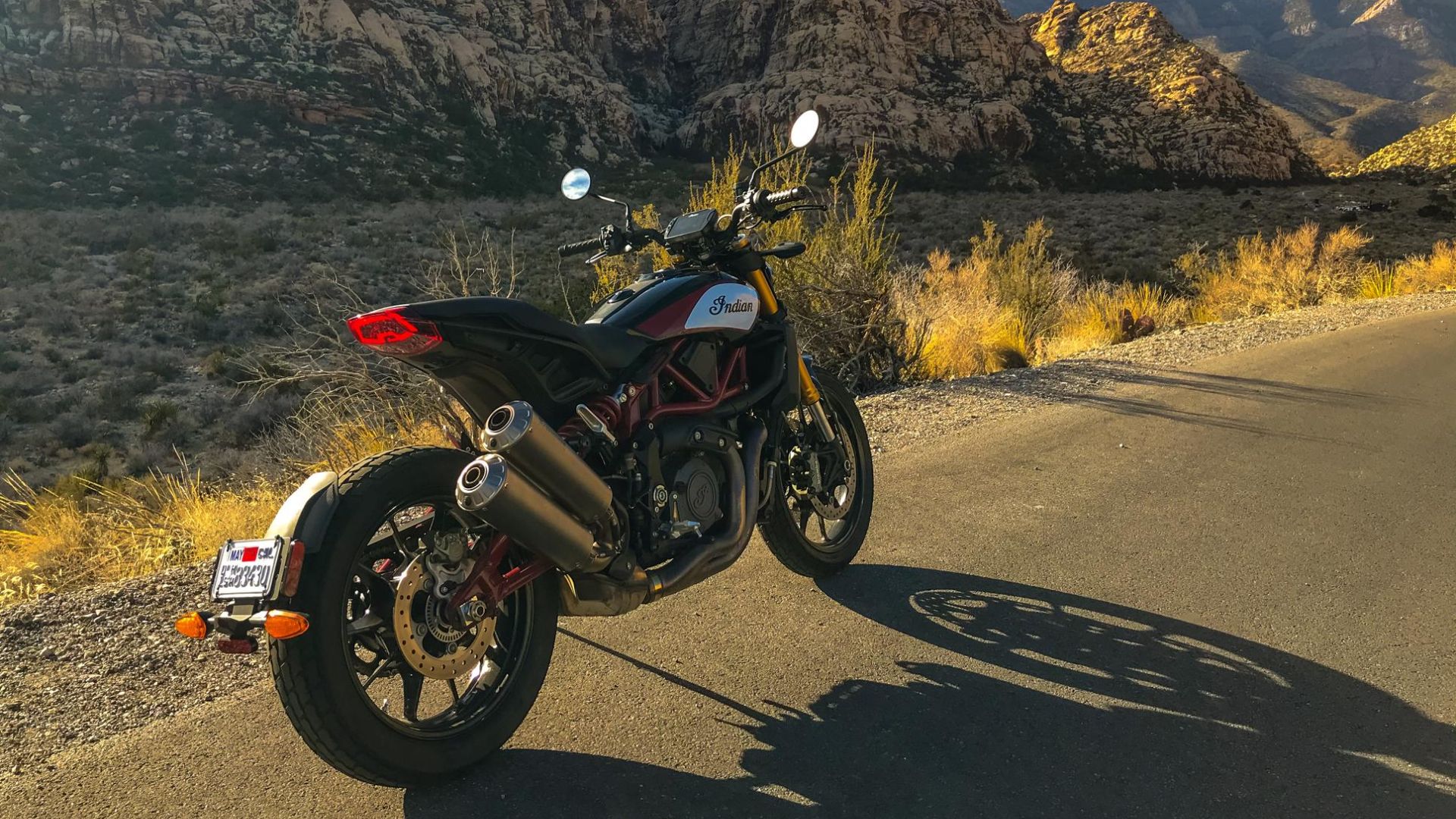 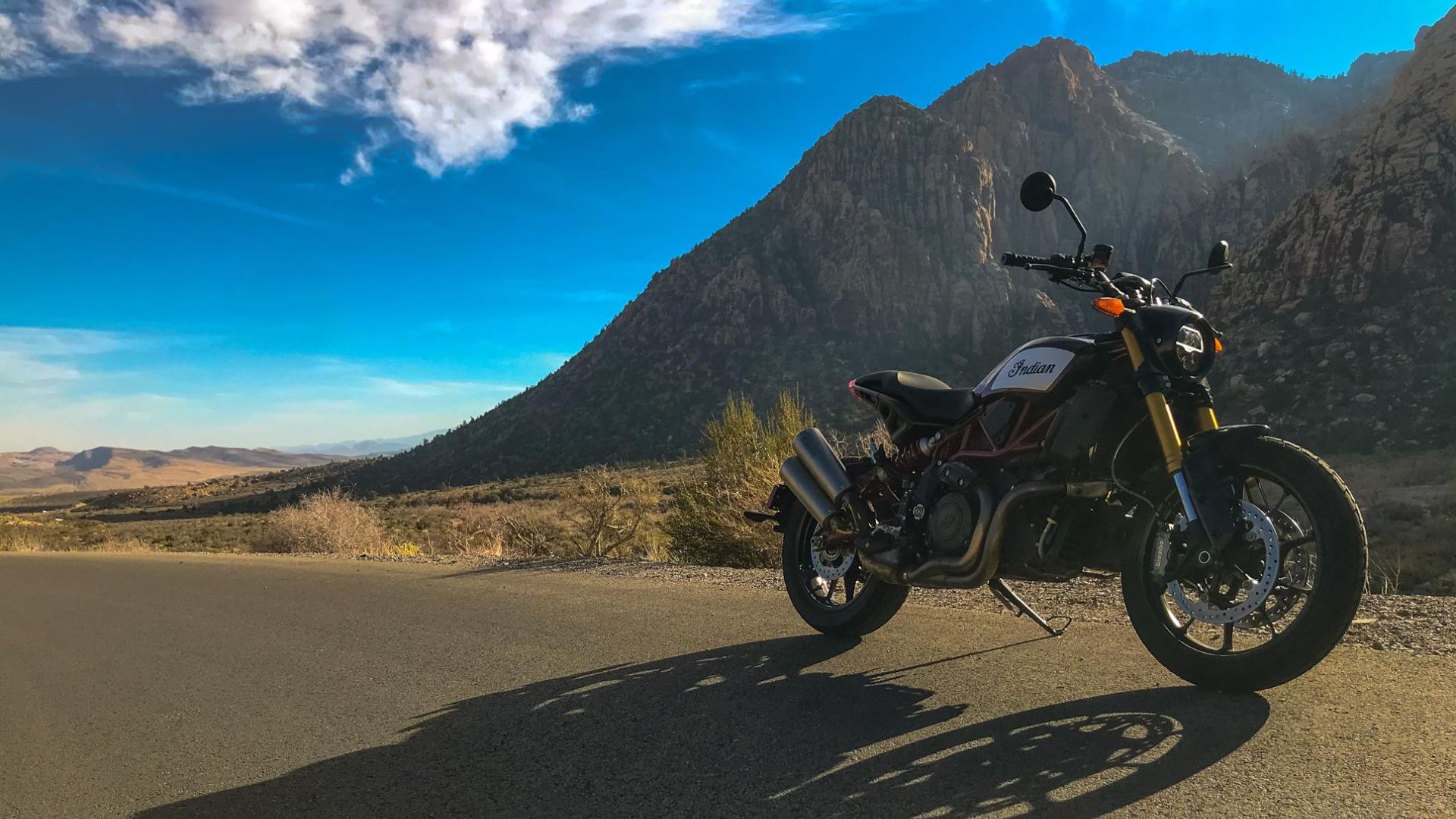 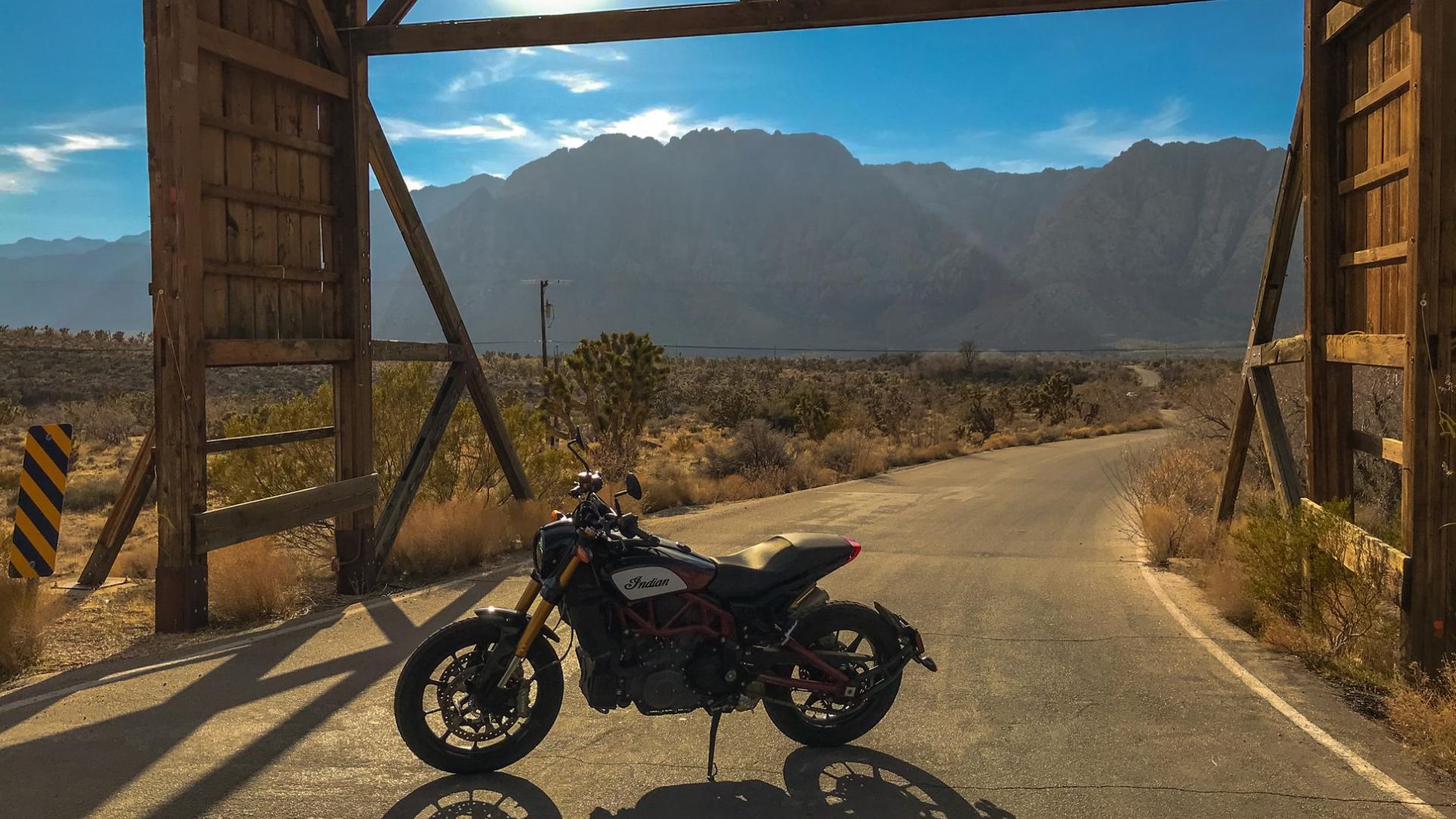 Braking performance is similarly great, with the front calipers grabbing the rotors like Rocky Balboa gripping Apollo Creed’s hand, though I’d have been happier with a little more of that testosterone at the rear. Another small demerit comes in the form of its 3.5-gallon fuel tank, which the V-twin will happily drain like a collegiate freshman with a fresh keg.

What I can't heap enough praise on, though, is the pitch-perfect upright seating position and how it feels ripe for adaptation. Cough, cough, adventure bike, cough, cough.

Indian hasn’t confirmed its future plans for the FTR platform—I’m gonna harp on an ADV until the heat death of the universe—but with such wide-open spaces around Red Rock, and dirt oval domination being the bike’s O.G. purpose, I needed to see how the FTR1200 S handled itself off pavement. Spoiler, it rocks.

While not exactly the Rubicon Trail, the access roads that cut across the open desert surrounding Las Vegas offer enough obstacles to stop most road-going motorcycles dead in their tracks. Not the FTR1200 S. Bounding up one hill littered with medium-sized boulder chunks and loose gravel and sand, with not another soul in sight to help me if I went down, the FTR1200 S' composure made it seem as if it were built for off-road antics.

Neither its weight, nor apparent lack of suspension travel, impeded the fun. Sure, deep sand would’ve sucked, but the FTR1200 S can handle 85 percent of what the average trail presents.

Back on tarmac, once again heading into the depravity of Las Vegas proper, I contemplated whether the 2020 Indian FTR1200 S was worth the wait. All of two seconds later, the answer popped in: absolutely. This is a motorcycle that combines old-school good looks, a nameplate rich with history, and the gravitas and grunt to back it all up, and all for just $15,499. The standard FTR1200, which makes do with a less-advanced suspension setup and electronics suite, is priced even more reasonably at $11,999.

While other motorcycle manufacturers are content with building bikes for Brooklyn hipsters sporting handlebar mustaches and resurrecting prohibition aesthetics, all without the actual moonshine substance to back it up, the FTR1200 S lives the Sailor Jerry life its exterior suggests and more. What a bike.