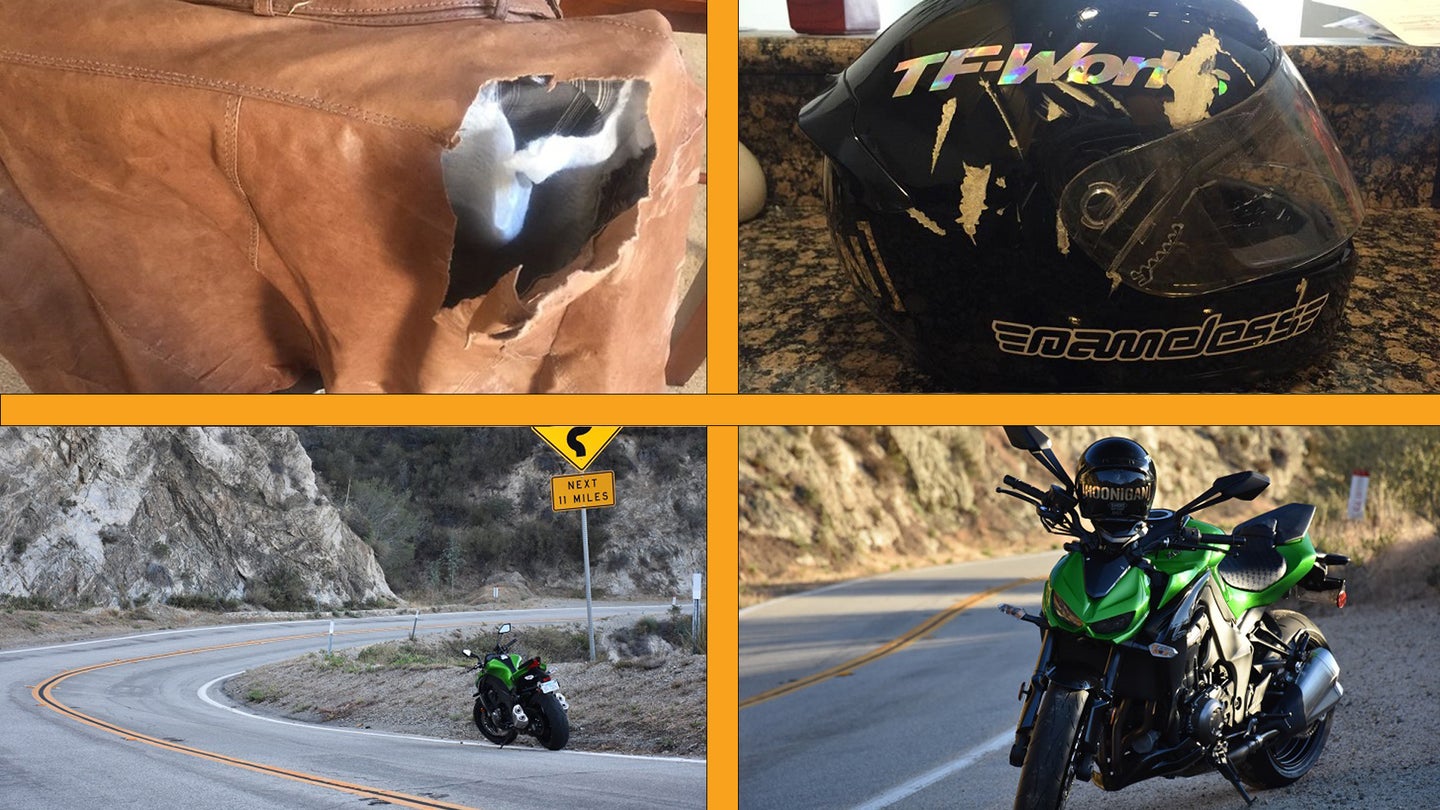 A few weeks ago, I asked what you, The Drive’s dear readers, wanted to see reviewed by our team of talented editors. You spoke your piece in the comments, on social media, and through email and resoundingly told us you wanted to see more motorcycle gear. That’s coming but before we start issuing our decries on what works and what doesn’t, I wanted to share a story about how wearing motorcycle gear saved my hide from serious injury and potential death.

Yes, this is yet another story of a near-death experience. I’ve had a few of those…

Years ago, Kawasaki had just released the then-new Z1000, a naked street-fighter motorcycle not unlike Ducati’s intoxicating Streetfighter V4S. Lightweight and nimble, its 1000cc engine made on-command wheelies a thing of giggle-inducing hysteria. I believe I called it a McLaren of the motorcycle world in my review. To properly capture the Z1000’s intoxicating personality I needed beautiful photos to show it off, so  I went for a ride through one of Southern California’s most excellent of canyons to snap some pics. Specifically, I went through Little Tujunga Canyon.

Native SoCal enthusiasts will undoubtedly know of “Little T,” but for those outside Los Angeles County, Little Tujunga is an 11-mile stretch of canyon road that, in my opinion, is better than any other road in SoCal. It’s beyond tight, with switchbacks, hairpins, and short straight stretches that require constant attention and laser precision. It’s also incredibly sketchy thanks to almost zero runoff between cliff wall and massive vertical drops. There have been numerous drivers who’ve misjudged corners only to find themselves requiring aerial recovery from Search and Rescue, who are thankfully based at the top of Little T’s mountain range—I wonder why.

I left our apartment that day ahead of the sunset to grab the best light. The Z1000 was finished in Kawasaki’s iconic green, and the way the sun hit its coat made the motorcycle look as if a layer of gold were shot underneath the green. That, along with the mountain’s rocky red/brown faces made the bike pop. A perfect photoshoot for a helluva motorcycle. Once my pictures were done, I strapped on my old Shoei helmet, threw on my leather jacket and gloves, and proceeded home.

At this point, I’d been riding since I was 17. I’d bought my first motorcycle while my parents were on vacation and learned to ride the ‘87 Kawasaki Ninja 600R up and down our street, much to the dismay of our neighbors, who were used to the neighborhood’s typical peace and quiet. Suffice to say, I knew that between the failing light, tightly constricted pavement, and steep-ass drops, I had to take it somewhat carefully. And so I did, but my guard wasn’t fully up and what I should’ve predicted was SoCal’s penchant for strewn gravel, sand, and debris across the canyon road’s pavement.

Along with my Shoei helmet, I had a pair of older Speed and Strength gloves, and really, not much else in the way of motorcycle gear. Regular old jeans shod my legs, while a leather jacket I got in Italy was wrapped around my torso. This, my friends, was incredibly stupid.

Halfway home, the light falling rapidly around me, a shadow covered a hairpin left-hander. Under my darkened visor, the pavement ahead looked clear of any impediments and I don’t believe I was even going 5 mph above the posted speed limit of 40 mph. It didn’t matter. Just before the turn, gravel was strewn across the tarmac. Very quickly, I became a passenger, as the motorcycle washed out underneath me.

I did have time to make one reaction, and it was the wrong one. Instead of letting the bike sweep out beneath me and sliding on my butt toward the turn’s wall, I tried to momentarily correct it. But as I attempted to fix the issue, the bike caught traction and threw me into the cliff wall. I rag-dolled across its jagged edges, shredding the leather jacket, my jeans, and both breaking my shoulder and tearing into my shoulder’s flesh.

I didn’t lose consciousness and was up rather quickly after my wreck. Moments later, a sheriff happened to be driving past and radioed for EMTs to come and assess me. My torso took the brunt of my injury and that’s thanks to the actual motorcycle gear I was wearing. My hands and feet were fine, as well as the most critical body parts, my head and brain.

My helmet was properly thrashed during my accident, skipping across the rocks with force. Once I was able to assess the damage, you could see where incredibly sharp rocks did their damndest to gain access to my skull with ¼-inch-deep gashes now adorning my Shoei helm. It didn’t just protect me, according to the EMTs and doctor who looked me over at the hospital, it saved my life. Had I not been wearing one, I wouldn’t be here typing this out. My wreck would’ve killed me. Instead, I walked away with a concussion—yes, another one—a broken shoulder, road rash, a bruised spine and some dinged-up ribs. To paraphrase Kate McKinnon’s Dr. Wenowdis on SNL’s Weekend Update, “I didn’t do good. It could’ve been better. But it could’ve been a lot worse.”

Since that accident, I’ve strived to wear proper motorcycle gear, the stuff that’ll shield my second of nine lives, every time I swing a leg over a motorcycle. Have there been times I’ve been lax in that goal? Oh yeah, there have been. I’m human and not perfect, and I want to be brutally honest with myself and everyone in those imperfections. It doesn’t mean I should’ve let my guard down just because I was going down the street. Too many friends have been seriously hurt while riding motorcycles for me to make excuses.

What I can do is commit myself to do better, to wear my gear all the time, and to help you, The Drive’s budding motorcyclists, better protect yourselves whenever you get on two wheels. That’s why, over the next few months, I’m going to be detailing how to pick the right motorcycle gear for you, what good motorcycle gear entails, what crappy motorcycle gear doesn’t do for your safety, and a lot of the best practices you can employ whenever you’re out riding.

I’m excited to share my passion of motorcycling with all of you and, hopefully, help ensure you come back from that next ride.

What I Now Wear

The Drive's Gear section is our brand new baby we want to grow. To give you, our dear readers, clarity on the process, the products we get in arrive from a variety of sources, including purchased ourselves or through manufacturers. No matter the source, we maintain our editorial independence and will always give you our honest assessment of any product we test.

And have products you want to be tested? Send your ideas our way!

We’re here to be expert guides in everything How-To and Product related. Use us, compliment us, yell at us. Comment below and let’s talk, y’all! You can also shout at us on Twitter or Instagram!

2020 Honda CB650R Review: The Right Salve for These Chaotic Times

It’s back to basics with the CB650R, which is exactly what you need right now.