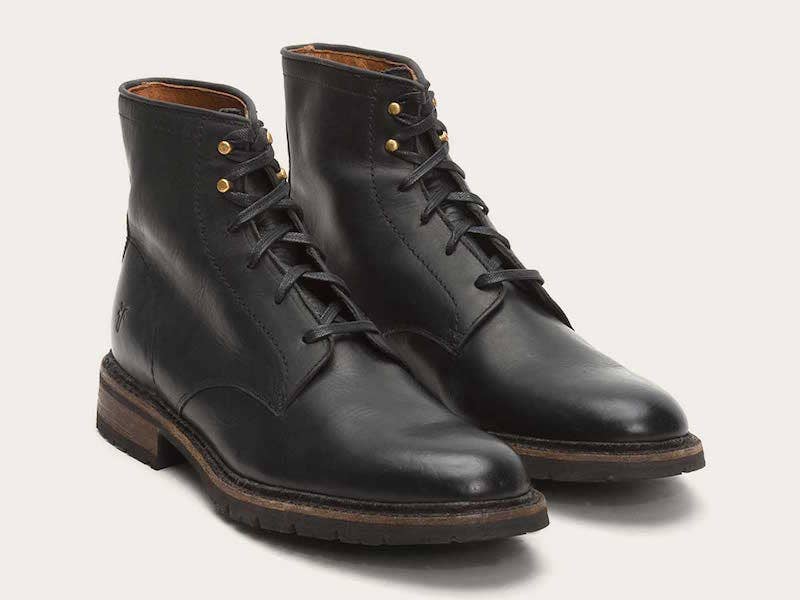 If Johnny Cash did it, it’s probably cool.* His brand of rough, gruff menace—and his sense of charity towards the poor and downtrodden—are admirable qualities to emulate, but how? You could have bought his custom 1970 Rolls-Royce, but you missed it. Maybe there’s magic in your fingers, too, but the time to pick up the six-string was years ago. It’s hard to arrange a show at San Quentin these days, even if the prison weren’t struggling with an outbreak of Legionnaire’s disease. What’s left is to dress yourself in black and achieve a swagger via pure sartorial darkness.

You’ll want to start from the feet up. Founded in 1863, The Frye Company is an American institution. Famous first on the feet of New England’s farmers as they pulled stone after stone from their fields, then again in the Sixties, when Barbra Streisand, Bette Midler and fashionista Richard Nixon sported custom designs. These Lug lace-ups have a serious heel, sturdy studs and Goodyear welted construction, meaning you’ll never frown due to wet socks, just affectation. The black polish and serious tread make a boot great for kickin’, stompin’, loafin’ and any other number of g-dropping activities.

Still, a man can only walk the line so far; at a certain point, he must drive. What better way to radiate a no-nonsense attitude than a used police vehicle? Though the Chevrolet Caprice is sold strictly via GM’s fleet service—that is, not to private buyers—used cars are fair game. With just over 600 miles, this car stretches that definition thin, but legal is legal. The black steelies and twin exhausts bear the same quiet menace as the boots, and the 6-liter GM LS engine speaks with a muted rumble that, were it human, would silence the rowdiest honky-tonk with its power. It’s dressed, of course, in gloss black.