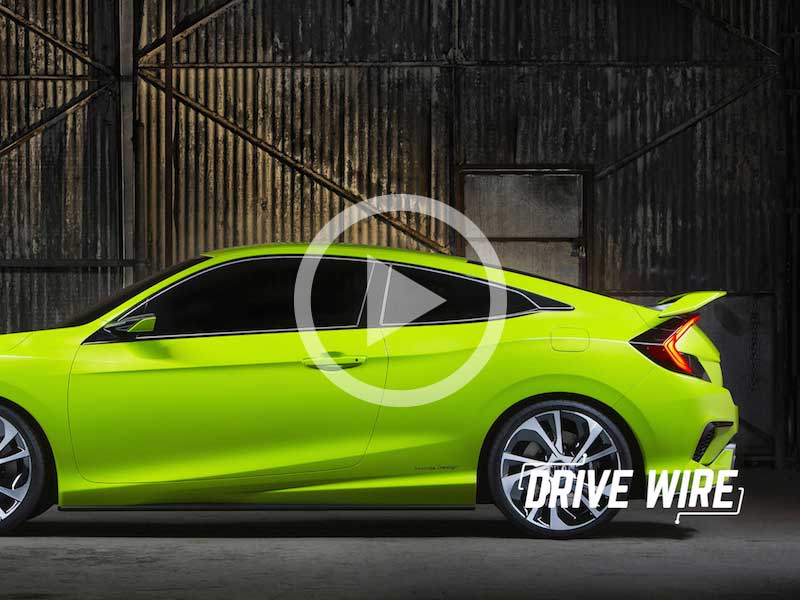 Hey guys, it’s Christina Thompson and this is Drive Wire for Thursday, November 12.

Honda has announced that the sleek new coupe version of the Civic will debut at the LA auto show next week. The new Civic boasts sportier lines — which we are huge fans of — and will be available with either a 2-liter inline-4 or a 1.5 liter turbo engine. The new Civic line will include an SI version, as well as a Type R, and a five door hatch. The traditional sedan arrives in dealerships this month.

Troubling news on the motorsports front – the Formula One US Grand Prix is under scrutiny. The state of Texas cut the subsidy for Circuit of the Americas from $25 million to 19.5 million. F1 president Becclestone says “it may be difficult to continue the race in Austin.” Circuit of the Americas chairman Bobby Epstein told the Austin-American Statesman Newspaper “to use a technical term, I think we’re screwed.” Funding was cut after a state audit concluded that the race was earning 20 percent less for Texas than originally predicted. Fingers crossed for fans and all the good people at the Circuit of the Americas.

In sad news for the Brits, the economic slowdown in China has Jaguar Land Rover planning to cut costs by nearly 7 billion next year. The company says it plans to maintain productions levels, but some employees are understandably worried about potential job cuts. Jaguar will be relying on increased platform and component sharing in order to be more cost-effective in the future. The company has made a remarkable recovery over the last decade, and showed a $4 billion profit last year. We’re curious to see what Jaguar has up its sleeve.

In gear news, check out the new Mollusc Tent project. It opens like a clamshell and is made of durable, high quality materials. It’s sort of a semi-perma-tent, and at 50 pounds it’s not very light. But it is exceptionally cool, and can comfortably sleep 3 adults. There’s also a jumbo version that sleeps half a dozen people … so it’s basically a fabric dome-home. Check out Mollusc’s Kickstarter to buy the plans or the finished product.

Turning to today’s ridiculous video –we don’t want to get your hopes too high, but this is not just a guy with a jetpack flying around the Statue of Liberty. It’s a guy with a prototype jetpack flying around the statue of liberty. The video, of course, is a fundraising appeal. Is it vaporware? We don’t know. But we want to believe. I mean, come on – it’s a jetpack! Either way, this is fun viewing.

Ferrari endurance cars, a hybrid RAV-4, the new Camaro, an electric bicycle, and a snow-ATV.