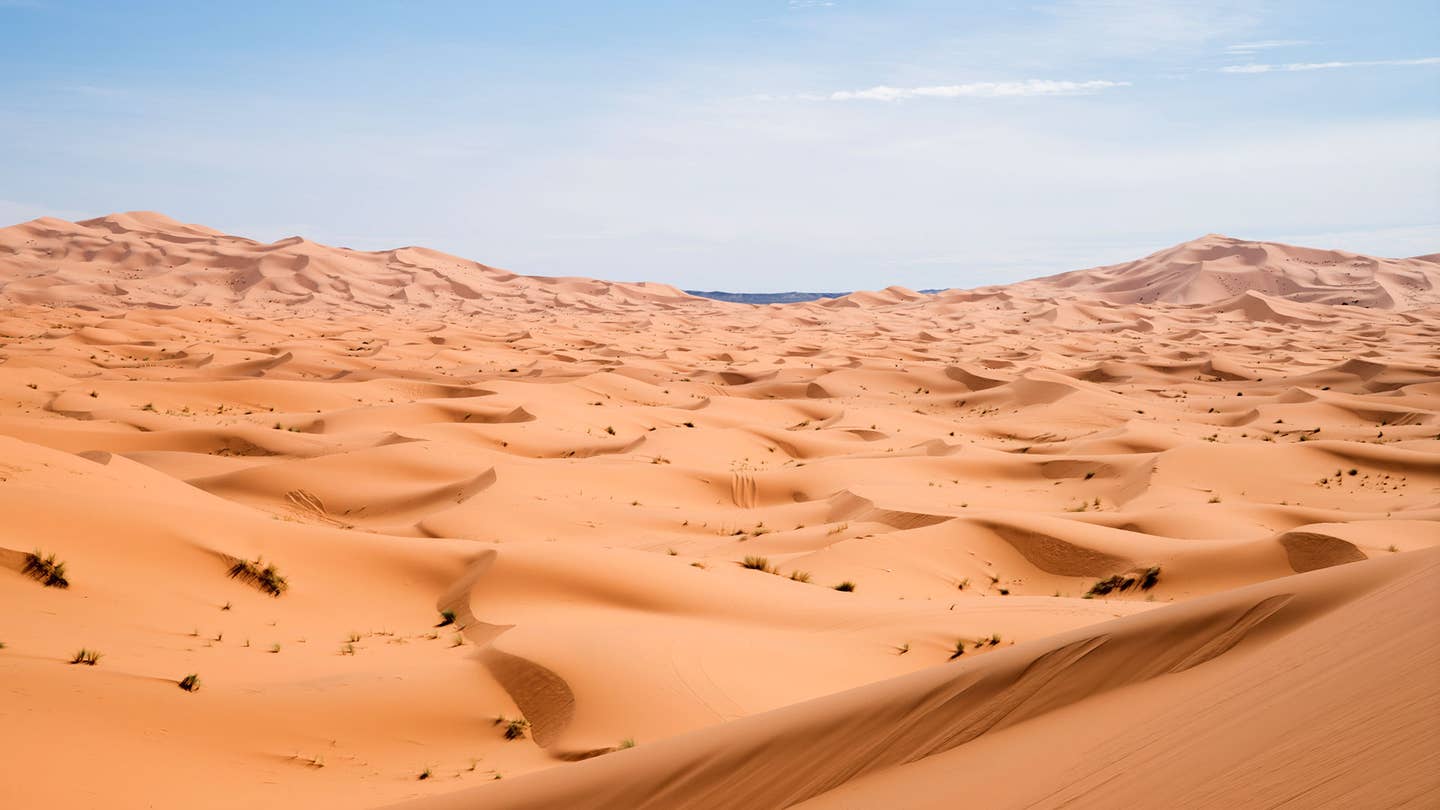 Our intrepid west coast editor, Chris Cantle, is on a Harley-Davidson. A big ol’ Street Glide, motoring from Spain across North Africa. Two weeks. Thousands of miles. Man and machine, exposed to the elements, traversing some of the world’s prettiest and oldest and wildest places. He sends us periodic updates from the road.

Part 3
Iron in the Kasbah

Imagine the Sahara. Imagine dunes. Imagine vastness. Now imagine how you get there. You'll probably imagine a Land Rover, a Hilux, maybe a big BMW GS, or a camel. Me, too.

But while dune-assaulting Defenders get all the love, there's a quiet army of vehicles doing the real heavy lifting in the Sahara. Vehicles so tough and reliable that they don't just tour the world's greatest desert, they thrive and congregate. These are the real heroes of the Sahara.

Employed as a hauler of anything and everything in Morocco, the indefatigable Bremen Transporter can be found plying the roads as a school bus, cattle car, bakery, shoe shop or fuel dump. Invariably equipped with a crooked tri-star and massive roof rack, the indestructible Mercedes will teeter down highways belching smoke as it totes an entire farm: cows in the back, sheep, goats, chickens and hay to feed them all stacked high on the roof.

My high school wheels get an even more abusive test in the Sahara. Pressed into service as a taxi, the efficient diesel 240D is a brilliant cross-Sahara machine. The best of the lot sport air-conditioning. All stack passengers deep enough to test the suspension. Three across the front. Three across the back. Kids shared variously among laps.

The 505’s diesel death rattle was part of Peugeot’s last gasp in the U.S. A shame, because we never really understood the hero that is the 505 Estate. If we had, things might have turned out differently. The spacious wagon can be found all over Morocco’s gnarliest roads, and is frequently employed as a taxi in the Sahara. A tough-as-nails four-cylinder diesel lies under sheet metal that’s aged remarkably well. Adding to its French pedigree is an interior designed by Paul Bracq. Turns out the “Workhorse of Africa” is actually quite a thoroughbred.

Unless you've logged miles in  the Sahara, you've likely never known the stamped steel of the North African Tuk Tuk. Typically made in China and sporting some manner of copyright infringing (see: “Keweseki,” “Batman”) brand name, as well as borrowed engine designs, the Tuk Tuk still carries its weight, and more, in Morocco.

Want to really know the Sahara? Forget your "Dakar inspired" 1200cc off-road bruiser and go local. Variations of the Super Cub are in proud daily service throughout the Sahara, as they are all over the developing world. Chinese knock-offs might look flashy, but the tried and true Honda formula from 1958 is still just as good today.

Camels are a little posh for real work: The great, beautiful brutes are expensive, and better suited to lugging tourists between tea and lunch stops. Know what beast the working man trusts in this tough desert? The humble donkey. Little sweet-faced burros haul massive loads with a just a bit of prodding, they tug carts down the road at surprising speed and make big, gangly camels look positively high maintenance. Maybe like a Land Rover you knew once.