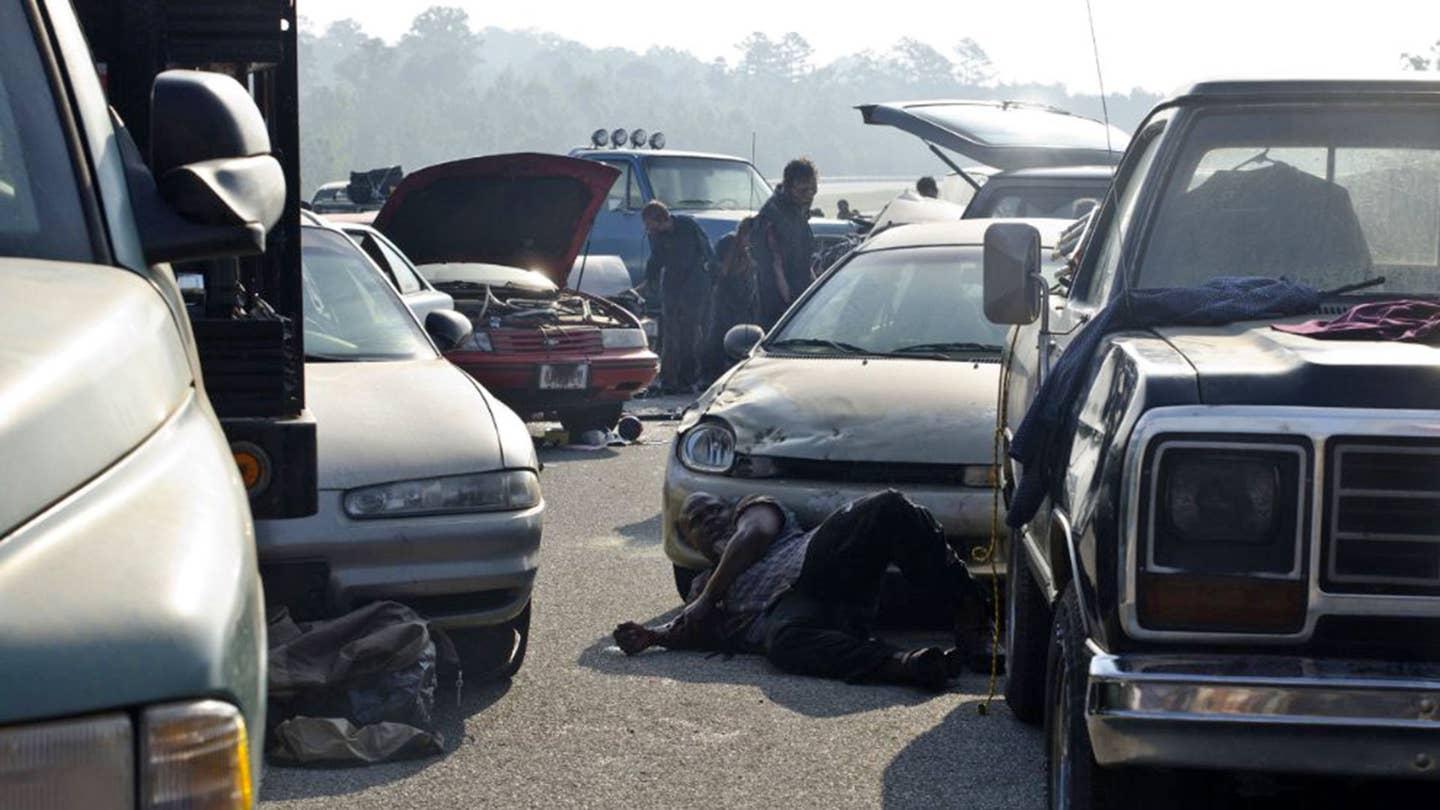 Of all the questions raised by The Walking Dead, AMC's hugely popular zombie-apocalypse series, the one that eats at car people may be this: Faced with the perpetual threat of flesh-eating-zombie epidemic, where would the show's non-zombie characters acquire the fuel to power their cars, trucks, tanks and other conveyances, and where do they find ammunition for their zombie-blasting guns?

We realize that the series is fictional, but the question is not. If, to paraphrase Forrest Griffin, the shit went down—or even if there were just a run-of-mill robot insurrection, like the one depicted in the Terminator movies—how would we deal with ever-scarcer resources?

It's time for some real talk. It's time to debunk some myths about the End Times.

1. You Won't Have to Hoard Ammo

Guns and ammo would be a cinch to find. In the U.S., there are more firearms than people. On the ammo side, a couple of major shortage panics over the past decade led to extensive hoarding. So the image of every character in The Walking Dead being armed to the teeth seems entirely plausible. If most of the nation's gun owners were instantly turned into mindless zombies, it would probably be pretty easy to jack their thundersticks.

Then there's the fuel issue. The show's crusading zombie fighters drive every manner of vehicle—old pickups, a police cruiser, a Hyundai Tucson crossover, even a Vietnam-era M60A1 Patton main battle tank, which makes its final stand in the big prison battle in Season 4. (But maybe its demise is a good thing. The V12 diesel-engined Patton gets worse than 1 mpg.)

Granted, the federal government maintains the Strategic Petroleum Reserve: 714 million barrels of black gold on standby. Under normal use, that would last less than 80 days. (The U.S. Energy Information Administration says we consumed 374.7 million gallons, or 8.9 million barrels of oil per day in 2014). But we can assume that the zombie apocalypse would drastically reduce daily consumption for the foreseeable future.

Let's say that only about 10 percent of the pre-cataclysm population survived. We can assume from the long line of empty vehicles lining the interstate in The Walking Dead’s first episode that the zombies aren't driving at all (otherwise the show may have been called The Driving Dead and would have been exponentially more terrifying/hilarious). Using the 10-percent number as a basis, the national fuel supply could theoretically be milked for more than two years.

Two years? you say. Why, that's plenty of time to use the viable vehicles to wipe out the bloodthirsty zombie horde!

4. All Fuel Is Not Created Equal

There are two big faults at work here. First, we must assume that most of the corps of knowledgeable oil service workers who maintained the nation's fuel supply are now staggering around aimlessly in search of flesh and brains to eat. With no mind power left for operating machinery and performing chemistry, crude in the overall supply is going to stay crude.

That means our heroes will have to rely upon petroleum that's already been refined into gasoline. And that brings us to the second problem. Gasoline is only good for about three or four months before it morphs into a yellow slurry that coats vehicle fuel system parts with what's essentially varnish. Engines don't like that. There's a reason why used cars advertised as, "Ran when parked, sitting 20 years," are often listed so cheaply.

5. Pep Boys Is Your Best Friend

There are some upsides, too, though. Adding a chemical stabilizer to gasoline can make it last a month or two longer than it would normally. Since auto-parts store employees, like their oil refinery counterparts, have mostly likely become zombies (if they weren't zombies to begin with), no one from the corporate loss prevention department is keeping tabs on store inventory.

You can blast a few counter-zombies with your trusty, Second Amendment-protected semi-automatic assault rifle, then make off with the store's entire stock of Sta-Bil. While you're at it, you might grab a couple armloads of those little Christmas tree air fresheners and a Mossy Oak woodland camo hat with "Ain't Skeered" emblazoned across the front.

There's also diesel fuel. In the zombie-infested future, #dieselgate will no longer matter. What will matter is the fact that diesel has a longer shelf life than gasoline. That's partly why the U.S. military uses diesel and variants like JP-8 in almost every machine it operates. According to Off The Grid News, a Christianity-themed survivalist website, untreated diesel will last an entire year. With the right preparation, it could last up to five years.

With that in mind, the diesel-powered, Vietnam-era Patton tank doesn't sound like such a bad idea. Rick Grimes and the gang would probably do well to ditch their gasoline-powered pickups for diesel rigs. (If you're already preparing for a takeover by the undead, you might be able to convert your fleet using diesel engines scored super-cheap from VW.)

One final thought. It's a theory, really. If zombies are no longer technically alive, they should, like reptiles, be more vulnerable to heat and cold. Lacking the means to heat itself, wouldn't the zombie therefore freeze and become immobile in sub-zero temperatures? If that were the case, the best thing to do would be to move your entire tribe of non-zombies to North Dakota and teach them how to refine the natural gas and oil that comes out of the ground there. That's what I would do if I were ol' Rick. There are plenty of oil and gas wells there, and during the state's long, cold winter, all the zombies would freeze solid. All he'd have to do is send out a team of workers in a fleet of diesel trucks towing diesel-powered chippers and grind up all the frozen zombies, Fargo-style.

The special-effects budget would need some goosing, though.