Can You Revive a Truck That’s Been Under Water For 6 Hours?

The answer is, probably not. But you’ve got to try. 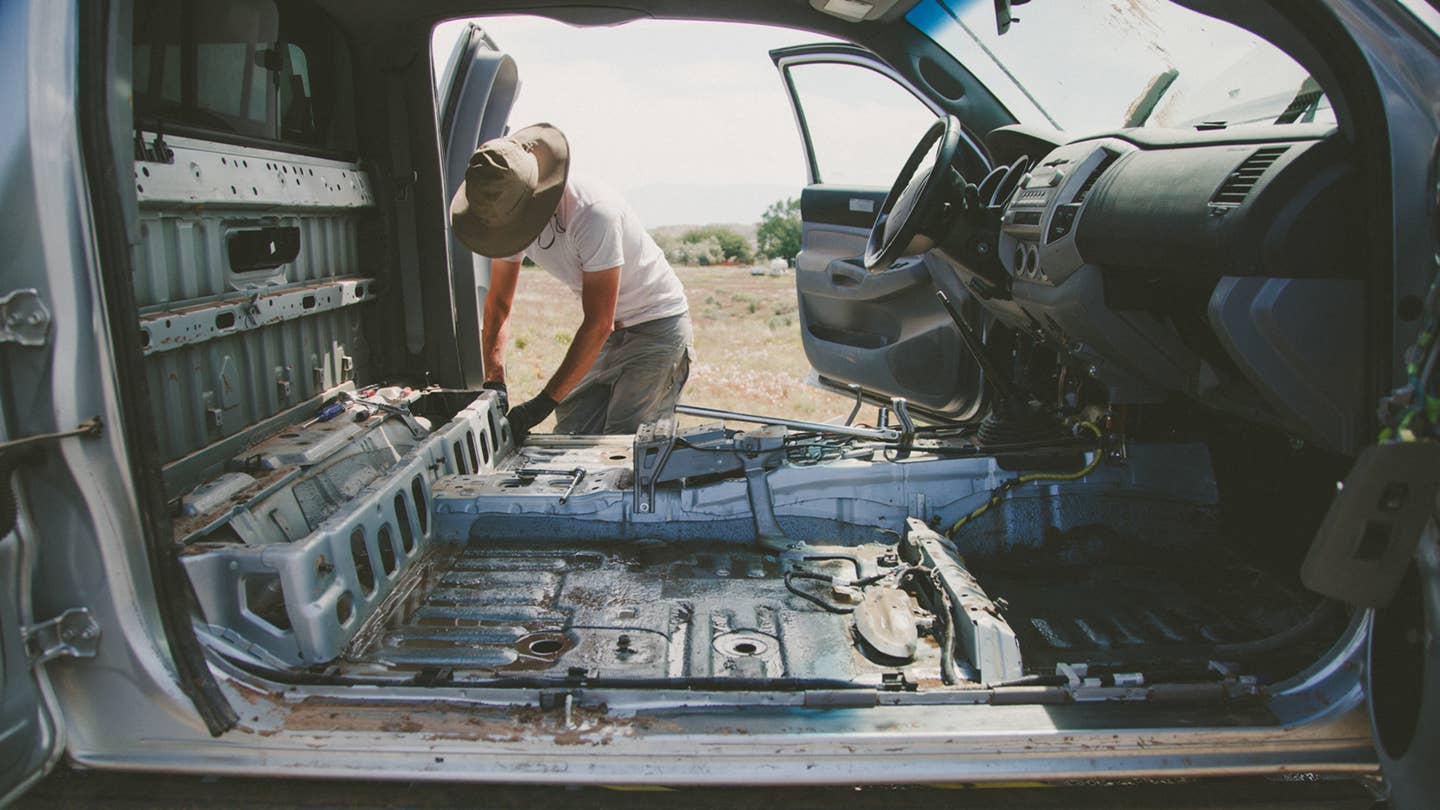 We pulled Kevan’s Tacoma to Grand Junction and spent a day dissecting the interior. Letting the arid desert sop up the river water left in the cab. If the soaked seats and carpet were bad, the astonishing amount of sand stuffed everywhere was worse. The current had carried silt to every crevice, filled every cavity with heavy red grit. The passenger door was so full we couldn’t get it open at first. The hood had doubled in weight, its substructure now lined with 100 pounds of the stuff.

The engine bay had turned into an apocalyptic beach. No part of the truck’s 4.0-liter V6 was easily discernible beneath the blanket of Utah sand we found there. We didn’t know what the future held for the truck—whether insurance would total the thing, or whether Kevan would have to do the impossible and try to resurrect a machine that had spent six hours up to its mirrors in the Dolores River. Either way, it was worth our time to get as much sand and water out of the truck as we could.

If there was a silver lining, it was that the silt was easy enough to get rid of once it dried. Just turn on the air compressor and go to town with a nozzle. For about an hour, the neighborhood looked like it had been enveloped by a very localized sandstorm, but by the time we were done we could at least see the valve covers. We pulled coil packs. The spark plugs. Hooked the Optima battery to the Dodge to let it charge for a spell in the hopes that it wasn’t completely dead. Kevan pulled the drain plug on the oil pan.

I expected to find water there. I did not expect to see pure, clear river pour out of the truck’s belly for a good 40 seconds. Disturbing. We turned the engine over by hand, at first, letting the cylinders spit out the water that had filled their lungs. Refilled the oil, hooked up the battery. Somehow, the thing held a charge like nothing had happened.

I wanted to hear the truck fire. Even if the thing was dead. Even if insurance was going to drag it off to some crusher somewhere. I wanted that engine to come to life if for no other reason than to show Kevan that yes, this is a massive fuck up, but it’s fixable. It’s a machine. A good and loyal machine that did its best with the impossible circumstances handed to it.

That’s the one shining miracle of metal. That with enough insistence and patience and devotion, anything can be fixed. You can undo your sins. Erase the bent and the broken. It’s a rare and precious gift.

We reinstall the spark plugs. Hook up the coil packs. Hit the starter. The engine spins and spins, still coughing spits of water from the exhaust, but never hits a lick. Never fires. It’s a series of problems, I say. There’s water in the fuel, most likely. But Kevan’s too demoralized to keep working, and there’s rain on the horizon. We pack up the tools. Discard the carpet and the sound deadening. Hang the soaked clothing on a line and contend with a new reality. We’re a long damn way from Knoxville.