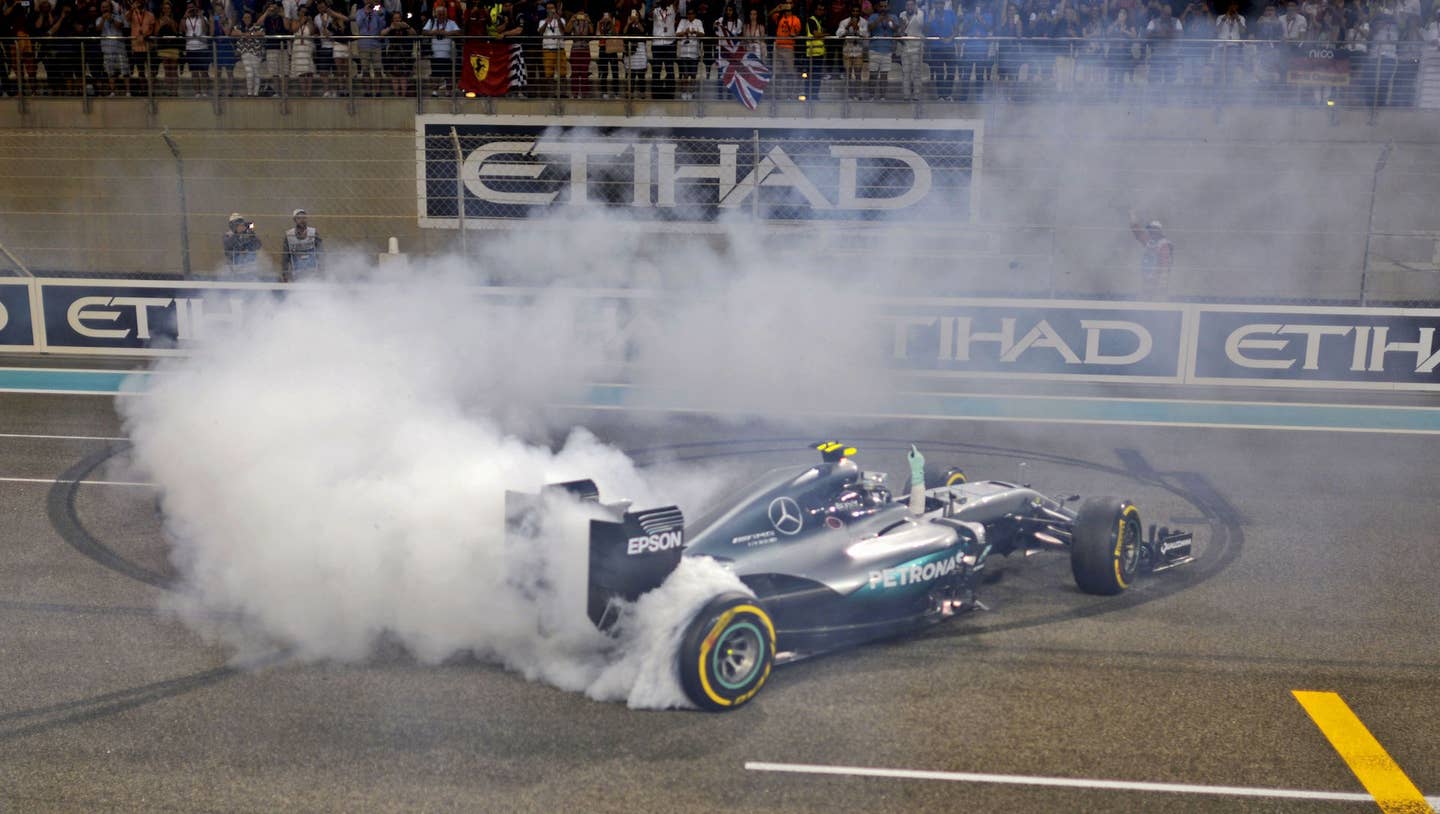 The war is over. Nico Rosberg is your 33rd F1 World Champion.

The German clinched the 2016 title Sunday, finishing second at the Abu Dhabi Grand Prix, enough to edge out his Mercedes-AMG teammate and defending king Lewis Hamilton. The latter driver took the win, but not without some controversy. In the closing laps, Hamilton slowed to a relative crawl, backing up the grid, thus allowing Ferrari’s Sebastian Vettel an opportunity to overtake Rosberg; had Rosberg dropped to fourth place, it would've given Hamilton enough points to take the title.

“We need you to pick up the pace,” Paddy Lowe, Mercedes-AMG’s head honco, chirped over the radio at Hamilton, who’d already ignored similar messages from a race engineer. Lowe then paused, and added one short, stern sentence: “That’s an instruction.”

Hamilton again ignored them. But Rosberg, 31, managed to defend position against a hard-charging Vettel, sealing the podium order and securing his first career title.

Rosberg’s father, Keke, won the F1 World Championship in 1982. They now join Graham and Damon Hill as the sport’s only father-son title-winners.

Drama out front, and there was plenty of jostling mid-pack. In the end, Red Bull’s Max Verstappen recovered from a first-lap spin, turning in a brilliant drive for fourth place. His teammate, Daniel Ricciardo, was fifth, followed by Ferrari’s Kimi Räikkönen. The Force India cars of Nico Hulkenberg and Sergio Perez came in seventh and eighth, respectively. Williams’ veteran Felipe Massa finished ninth, scoring points in his final Grand Prix. McLaren-Honda’s Fernando Alonso rounded out the top-ten.

The Spaniard's teammate, Jenson Button, did not fair as well. He suffered a suspension failure after clipping a curb on the tenth lap. He was unable to finish, a disappointing end to an illustrious F1 career spanning 16 years, 308 races, and, in 2009, a turn as World Champion.

Other notables: Both the Torro Rosso cars, driven by Carlos Sainz and Daniil Kvyat, failed to finish. Kevin Magnussen’s Renault, and the Williams of Valtteri Bottas, also retired from the race.

But the big story here, as ever, comes from the Mercedes-AMG camp. After a wild, contentious season between the warring teammates, Rosberg’s title win seems to have done anything but resolve the rivalry. And while the two eventually embraced, the atmosphere after the race, and on the podium, felt tense.

"There was never a moment where I felt I was going to lose the race. It is a shame that it is quite clear their thought process,” Hamilton commented, “and I don't have much to say to be honest.”

He added: "For me, I am in a position where I had a lot of points lost during the season so for me I am out there fighting and generally never try to do anything to harm the team or the brand … We won the constructors' championship so it was down to me and Nico today. However, they felt they still needed to make comments. We will discuss it afterwards as we always do."

And we will be discussing this one all off-season.