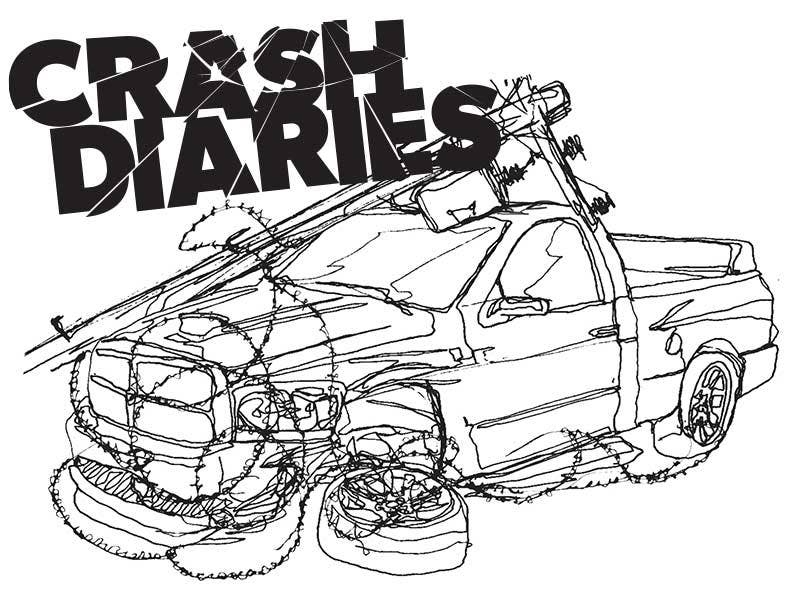 The Crash: “I ought to arrest you right now…”

The steely eyed California patrolman looked through me. He and his partner, both in campaign hats, ogled the glinting, twisted red carnage. My stomach knotted. Then he winked.

“…for ruining that beautiful truck!”

Flash back a few hours. I was sitting at my sister’s place in Orange County, joking about what a disaster recipe this thing was: A rear-drive pickup with a Viper’s V-10 engine, no traction or stability control, DOA steering, dual paint stripes and a ridiculous wing spanning the cargo bed.

The rain started soon after leaving her house, California’s first drops in months, loosening embedded oil on the I-10. Coming around a corner in Coachella Valley, hustling to make the Dodge media dinner in Palm Springs, my lane washed out. The SRT broke loose.

Time slowed in that cliché-accident way. But there wasn’t even a moment to think, Oh, this is going to hurt, before the truck was boring toward a utility pole. The Ram, now literal, sheared it like a toothpick. The wood windmilled 10 feet above the truck’s roof before tumbling to earth.

Next came the 40 yards of barbed wire.

Grabbing air as it bounced sideways, the Ram reeled in fence-trim under its body like spool. Paradiddling a row of evenly spaced fence posts, the combination made an intriguing rusty rhythm. Bah bum, bah-bum, bah-bum, and so on. I finally bucked to a stop, beached in a cloud of exhaust, pollen and dust. One of the wheels, complete with tire, was still making a break for it. It rolled out of sight. Gawkers who’d witnessed the crash drove by slowly. No one stopped to help. I didn’t blame them.

The Damage: Climbing from the cab, I was greeted by this shiny red porch, a perfectly formed step to the weedy ground. That turned out to be the Ram’s plastic front fascia, sucked beneath the truck and spit out the driver’s side. Also under the truck: barbed wire like sagebrush, so much balled-up metal that I couldn’t see out the far side.

The officers were nice enough to give me a lift into Palm Springs. At the Dodge media event, Scott Brown, Chrysler’s intrepid PR man, took the bad news with grace. The truck could be replaced, he said, and that the important thing was that I didn’t get hurt. That meant a lot.

The Moral: The Dodge could easily have flipped; a sturdier, old-school utility pole might have sliced it in two, and me with it. So if you’re in a pickup, be wary of rain. Being late for dinner is O.K., fashionable even. Showing up in a police cruiser is not.