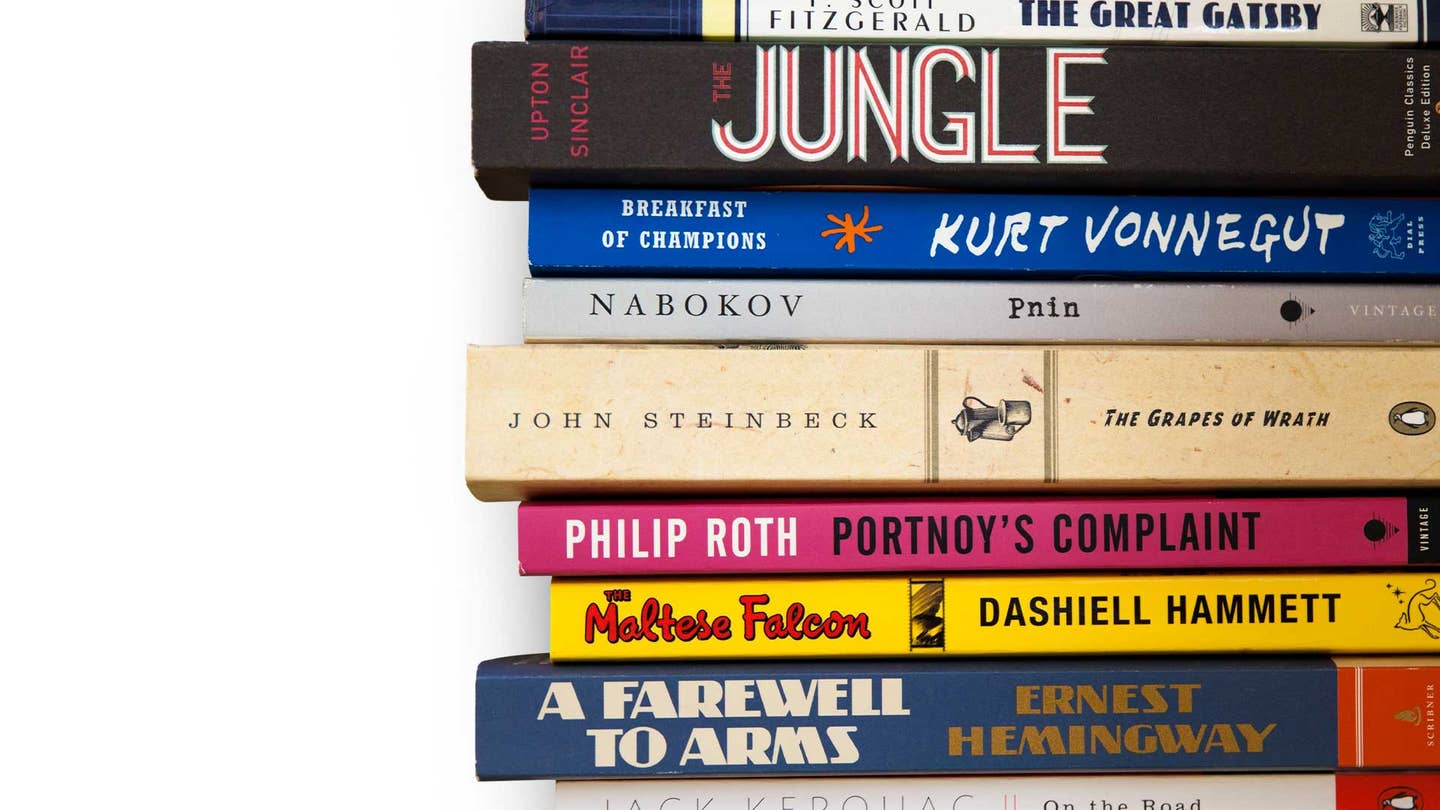 From Breakfast of Champions by Kurt Vonnegut:

Harry couldn’t do anything but let his mouth hang open. The Hawaiian Week Dwayne had mentioned was a sales promotion scheme which involved making the agency look as much like the Hawaiian Islands as possible. People who bought new or used cars, or had repairs done in excess of five hundred dollars during the week would be entered automatically in a lottery. Three lucky people would each win a free, all-expenses-paid trip to Las Vegas and San Francisco and then Hawaii for a party of two.

“I don’t mind that you have the name of a Buick, Harry, when you’re supposed to be selling Pontiacs—” Dwayne went on. He was referring to the fact that the Buick division of General Motors put out a model called the Le Sabre. “You couldn’t help that.” Dwayne now patted the top of his desk softly. This was somehow more menacing than if he had pounded the desk with his fist. “But there are a hell of a lot of things you can change, Harry. There’s a long weekend coming up. I expect to see some big changes in you when I come to work on Tuesday morning.”

The weekend was extra-long because the coming Monday was a national holiday, Veterans’ Day. It was in honor of people who had served their country in uniform.

“When we started selling Pontiacs, Harry,” said Dwayne, “the car was sensible transportation for school teachers and grandmothers and maiden aunts.” This was true. “Perhaps you haven’t noticed, Harry, but the Pontiac has now become a glamorous, youthful adventure for people who want a kick out of life! And you dress and act like this was a mortuary! Look at yourself in a mirror, Harry, and ask yourself, ‘Who could ever associate a man like this with a Pontiac?’”

Harry LeSabre was too choked up to point out to Dwayne that, no matter what he looked like, he was generally acknowledged to be one of the most effective sales managers for Pontiac not only in the State, but in the entire Middle West. Pontiac was the best-selling automobile in the Midland Area, despite the fact that it was not a low-price car. It was a medium-price car.

From Pnin by Vladimir Nabokov:

He thought that there is no such thing as the Aschan Art School or the Cache Cache School or the Cancan School. That the work of art created with string, stamps, a Leftists newspaper, and the droppings of doves is based on a series of dreary platitudes. That there is nothing more banal and bourgeois than paranoia. That Dali is really Normal Rockwell’s twin brother kidnapped by gypsies in babyhood. That Van Gogh is second-rate Picasso supreme, despite his commercial foibles; and that if Degas could immortalize a calèche, why could not Victor Wind do the same?

One way to do it might be by making the scenery penetrate the automobile. A polished black sedan was a good subject, especially if parked at the intersection of a tree-bordered street and one of those heavyish spring skies whose bloated gray clouds and amoeba-shaped blotches of blue seem more physical than the reticent elms and evasive pavement. Now break the body of the car into separate curves and panels; then put it together in terms of reflections. These will be different for each part: the top will display inverted trees with blurred branches glowing like roots into a washily photographed sky, with a whalelike building swimming by—an architectural afterthought; one side of the hood will be coated with a band of rich celestial cobalt; a most delicate pattern of black twigs will be mirrored in the outside surface of the rear window; and a remarkable desert view, a distended horizon, with a remote house here and a lone tree there, will stretch along the bumper. This mimetic and integrative process Lake called the necessary “naturalization” of man-made things. In the streets of Cranton, Victor would find a suitable specimen of car and loiter around it. Suddenly the sun, half masked but dazzling, would join him. For the sort of theft Victor was contemplating there could be no better accomplice. In the chrome plating, in the glass of a sun-rimmed headlamp, he would see a view of the street and himself comparable to the microcosmic version of a room (with a dorsal view of diminutive people) in that very special and very magical small convex mirror that, half a millennium ago, Van Eyck and Petrus Christus and Memling used to paint into their detailed interiors, behind the sour merchant or the domestic Madonna.

From The Grapes of Wrath by John Steinbeck:

Casy got out of the back seat of the Dodge and strolled on the side of the road when the truck pulled up. “I never expected you so soon,” he said.

Tom gathered the parts in the piece of sacking on the floor. “We was lucky,” he said. “Got a flashlight, too. Gonna fix her right up.”

“You forgot to take your dinner,” said Casy.

“I’ll get it when I finish. Here, Al, pull off the road a little more an’ come hol’ the light for me.” He went directly to the Dodge and crawled under on his back. Al crawled under on his belly and directed the beam of the flashlight. “Not in my eyes. There, put her up.” Tom worked the piston up into the cylinder, twisting and turning. The brass wire caught a little on the cylinder wall. With a quick push he forced it past the rings. “Lucky she’s loose of the compression’d stop her. I think she’s gonna work all right.”

“Well, that’s why I hammered her flat. She won’t roll off. I think she’ll jus’ melt out an’ maybe score the walls?”

Tom laughed. “Jesus Christ, them walls can take it. She’s drinkin’ oil like a gopher hole awready. Little more ain’t gonna hurt none.” He worked the rod down over the shaft and tested the lower half. “She’ll take some shim.” He said, “Casy!”

“I’m takin’ up this here bearing now. Get out to that crank an’ turn her over slowly when I tell ya.” He tightened the bolts. “Now. Over slow!” And as the angular shaft turned, he worked the bearing against it. “Too much shim,” Tom said. “Hold it, Casy.” He took out the bolts and removed the shims from each side and put the bolts back. “Try her again, Casy!” And he worked the rod again. “She’s a little bit loose yet. Winder if she’d be too tight if I took out more shim. I’ll try her. Again he removed the bolts and took out another pair of thin strips. “Now try her, Casy.”

Tom called, “She any harder to turn, Casy?”

“Well, then she’s snug here. I hope to God she is. Can’t hone no babbitt without tools. This here socket wrench makes it a hell of a lot easier.”

Al said, “Boss a that yard gonna be purty mad when he looks for that size an’ she ain’t there.”

“That’s his screwin,” said Tom. “We didn’ steal her.” He tapped the cotter-pins in and bend the ends out. “I think that’s good. Look, Casy, you hold tight while me an’ Al get this here pan up.”

Casy knelt down and took the flashlight. He kept the beam on the working hands as they patted the gasket gently in place and lined the holes with pan bolts. The two men strained at the weight of the pan, caught the end bolts, and then set in the others; and when they were all engaged, Tom took them up little by little until the pan settled evenly in against the gasket, and he tightened hard against the nuts.

“I guess that’s her,” Tom said. He tightened the oil tap, looked carefully up at the pan, and took the light and searched the ground. “There she is. Le’s get the oil back in her.”

They crawled out and poured the bucked of oil back in the crank case. Tom inspected the gasket for leaks.

“O.K., Al. Turn her over,” he said. Al got into the car and stepped on the started. The motor caught with a roar. Blue smoke poured from the exhaust pipe. “Throttle down!” Tom shouted. “She’ll burn oil till that wire goes. Gettin’ thinner now.” And as the motor turned over, he listened again. “O.K., Al. Turn her off. I think we done her. Where’s that meat now?”

“Why not? I worked in the shop for a year. We’ll take her good an’ slow for a couple hundred miles. Give her a chance to work in.”

They wiped their grease-covered hands on bunches of weeds and finally rubbed them on their trousers. They fell hungrily into the boiled pork and swigged the water from the bottle.

“I dunno,” said Tom. “Maybe they’d charge us a extry half-buck. Le’s go on an’ talk to the folks—tell ’em we’re fixed. Then if they wanta sock us extry—we’ll move on. The folks’ll wanta know. Jesus, I’m glad Ma stopped this afternoon. Look around with the light, Al. See we don’t leave nothin’. Get that socket wrench on. We may need her again.”

Al searched the ground with the flashlight. “Don’t see nothin’.”

“All right. I’ll drive her. You bring the truck, Al.” Tom started the engine. The preacher got in his car. Tom moved slowly, keeping the engine at a low speed, and Al followed in the truck. He crossed the shallow ditch, crawling in low gear. “These here Dodges can pull house in low gear. She’s sure ratio’d down. Good thing for us—I wanta break that bearin’ in easy.

On the highway the Dodge moved along slowly. The 12-volt headlights threw a short blob of yellowish light on the pavement.

Casy turned to Tom. “funny how you fellas can fix a car. Jus’ light right in an’ fix her. I couldn’t fix no car, not even when I seen you do it.”

“Got to grow into her when you’re a little kid,” Tom said. “It ain’t jus’ knowin’. It’s more’n that. Kids now can tear down a car ’thout even thinkin’ bout it.”

A jackrabbit got caught in the lights and he bounced along ahead, cruising easily, his great ears flopping with every jump. Now and then he tried to break off the road, but the wall of darkness thrust him back. Far ahead bright headlights appeared and bore don on them. The rabbit hesitated, faltered, then turned and bolted toward the lesser lights of the Dodge. There was a small soft jolt as he went under the wheels. The oncoming car swished by.

“We sure squashed him,” said Casy.

Tom said, “Some fellas like to hit ’em. Gives me a little shakes ever’ time. Car sounds O.K. Them rings must a broke loose by now. She ain’t smokin’ so bad.”