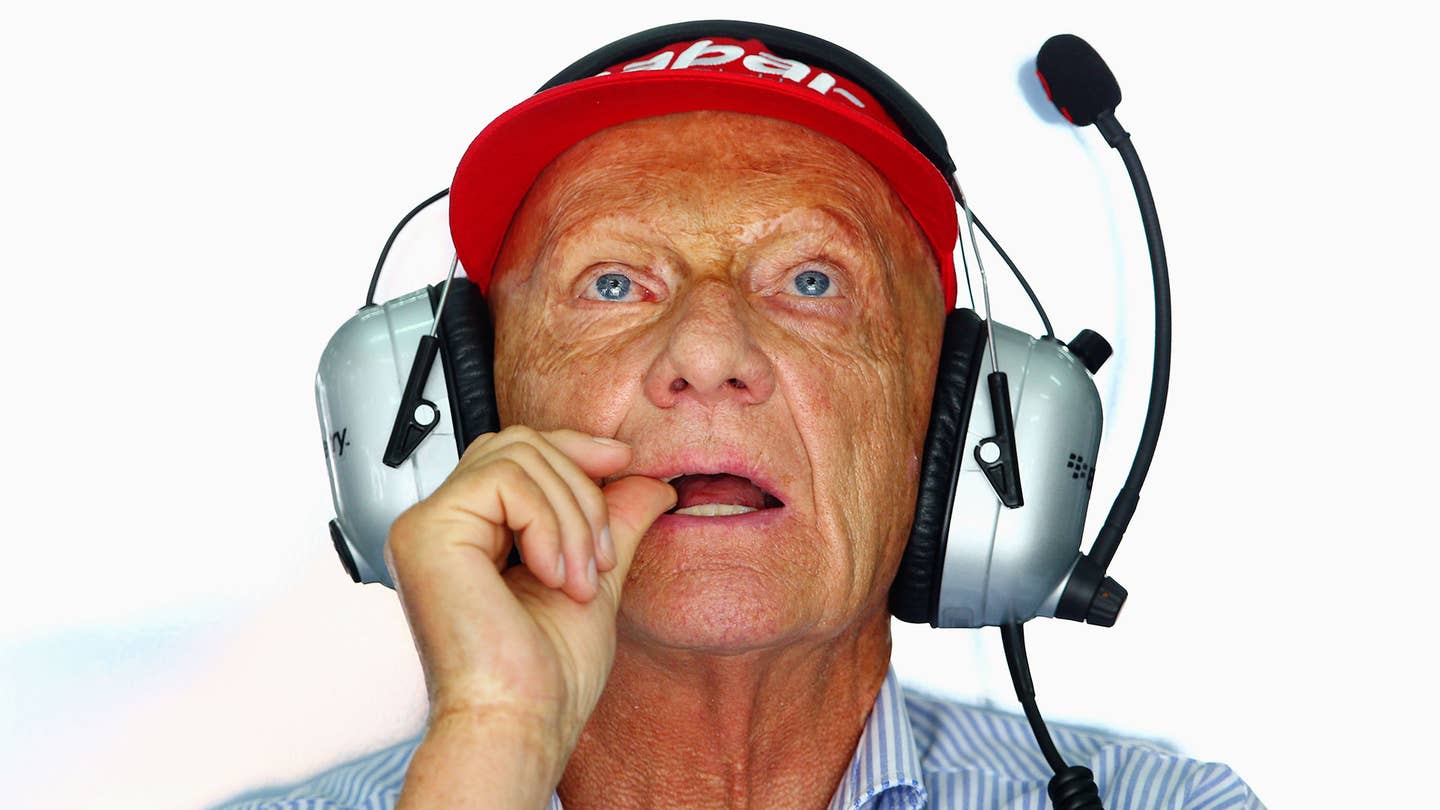 Ego is a vital ingredient of any competitive spirit. Typically, the bigger the ego, the more interesting the competitor—both on the field and off—because elevated self-worth can drive a person to push the boundaries of their abilities. It can also compel that person to let everyone within earshot know it, making them lightning rods for commentary, and controversy. "Lot's of ego" is rarely used as a compliment.

And yet three-time Formula One champion and current Mercedes F1 team chairman Niki Lauda says there's far too little ego in Formula One ranks these days: “The drivers are much too nice," Lauda says. "None of them has any quirks, and they all make sure they never put a foot wrong. Like robots. People want to see real men who make mistakes, take risks and say things they shouldn’t.” Lauda's advice: Give the people what they want.

Back in the sport's heyday, Lauda says, Formula One was filled with big personalities and even bigger egos, dominated by outspoken, charismatic drivers like James Hunt. Men that played as hard off the track as they pushed the laws of physics on it, unafraid to boast about their conquests or rant about perceived slights.

“Their antics, behind the wheel or not, made the sport more interesting,” says Lauda. “Those types of personalities don't exist in F1 anymore.” And they are much needed if F1 wants to rebuild its waning fan base and its coveted position as the pinnacle of motorsports.

Recently, I sat down with Mr. Lauda to discuss the current state of Formula One, how it can regain its swagger, and more.

The Drive: What are your thoughts on the current state of Formula One?

Niki Lauda: It has become lost in technology and lots of superfluous rules and regulations. Fans are turning off and tuning out from chronic boredom and frustration. It’s sad.

TD: Can’t that be said about most motorsports?

NL: Not MotoGP. There, the fan gets more racing, more excitement, more to watch. Riders are more in charge of their fate. They take risks. Formula One at the moment is the opposite. It has to re-focus on what made it great in the first place. The world will keep on turning even if there was no Formula One.

TD: Formula One Drivers are not in charge of their fate?

NL: The driver has become second fiddle. This is the main problem with [the sport]. Computers take care of the car. The engineers tell the drivers what to do. The drivers practically have all the decision-making power taken away from them by technology.

Even the start is essentially automated. The FIA regulates how the clutch engages and the way the car starts. Ideally, the start would go back to the way it used to be—drivers release the clutch manually and they go.

Formula One drivers were once famed for their bravado and their addiction to speed and danger. Today, many make headlines for moaning, not driving. They radio the crew for help with racing lines and car settings. They shouldn't have any contact at all. They’d should be left to fend for themselves.

TD: I thought drivers had little to no contact with the pit crew during the race?

NL: [Engineers are] not allowed to mention anything about the state of the car. You can tell [the driver] when he has to come into the pit, and these kind of things. Dangerous things you can tell him. So let's say he runs out of brake pads, and we see that there is a danger, then we can tell them. But everything else he has to do himself. Which is good.

TD: But no contact at all would be better.

NL: [Drivers] have to be able to make more mistakes again, so that we can distinguish who’s good and who’s bad.

TD: Are you saying Formula One would be better for the fans, if it were less safe?

NL: No. Nobody wants anybody to get hurt in Formula One. But the races are sometimes boring. And making it safer for the driver and less exciting for the audience is not going in the right direction.

We’re currently working on an entirely new concept for 2017. There are plans to boost top speeds through an aerodynamic rules evolution, wider tires, and weight reduction. [These cars] will be harder to drive. Not just anyone should be able to get into this car and drive off in it.

TD: It’s ironic to hear you say that safety measures are hurting the sport. You almost died in a fiery crash during the 1976 German Grand Prix because conditions were unsafe.

NL: We have to find the right balance between safety and excitement.

The envelope is pushed the same way today as it was in my day. The driver still has to make most of the decisions. The skill of driving is not any less today than it ever has been, even if driving is physically less demanding because of technological aids.

The difference is that today’s drivers have don’t have to worry about a car exploding or going out of control because they have to steer through a tight turn with one hand and shift with the other. Today, the shifter is not a stick on the floor, but a button on the steering wheel. To drive these cars to the limit is still hard, but there is no risk in it today. There is no challenge. The tracks are safer, cars safer, everything is safer. The sport needs some danger.

TD: So how would you reach a balance between safety and, what I’ll call, showmanship?

NL: As the chairman of the Mercedes team, I'll tell you that they go [in] the wrong direction. Take the halo safety cockpit, for instance. It’s too much. I think you need to see the driver's helmet properly as a spectator. You need to see how they work to control the cars. But you still need something to keep the driver safe.