Tony Stewart Is Back! Does Anybody Care?

Maybe his on-track performance is tepid, but his personality is spicy as ever. 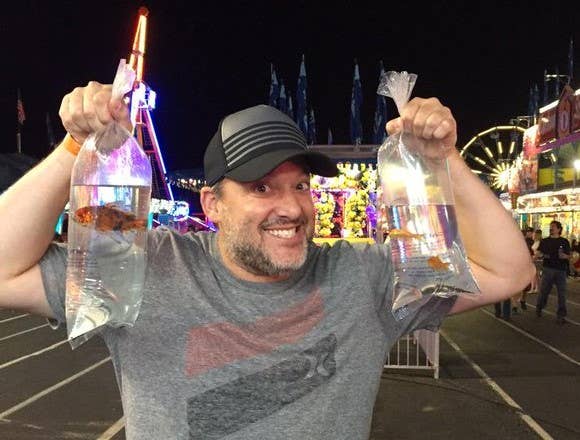 You already know that former NASCAR champ Tony Stewart missed the first quarter of the Sprint Cup season with a broken back, which occurred when he mistook a sheer drop-off for a gentle downhill while riding ATVs with friends out west. Stewart suffered a burst fracture of the L1 vertebra, and was expected to be out until maybe Memorial Day.

(NOTE: We'll explain the fish in a moment.)

But last week, Stewart and NASCAR announced that doctors had cleared Stewart to return to the track, to complete his final season of Sprint Cup racing. So this weekend, he did, at Richmond International Raceway’s Toyota Owners 400.

Won, appropriately, by Toyota Owner Carl Edwards, who knocked teammate and fellow Toyota Owner Kyle Busch out of the way on the last lap.

Stewart finished 19th, on the lead lap, one spot worse than he finished. He might have done a little better but he collided with Ford Owner Joey Logano on lap 268, which cut a tire on Stewart’s Chevrolet.

This past week, Thursday in particular, was one of the strangest in NASCAR history. Early that day – already surprising for Stewart, since he likes to sleep until noon – Stewart tweeted that he would be back in his Mobil 1 car this weekend. Then came the official announcement from Stewart-Haas Racing, then the official confirmation from NASCAR.

But even earlier Thursday, Stewart was quoted in USA Today as being “beyond mad” about the NASCAR lug nut issue. Which is, in a lug-nutshell: When NASCAR got rid of most of the inspectors on pit road, it became difficult to enforce the “five lug nut” rule, meaning that if an inspector saw a wheel leave pit road with fewer than five attached, he or she could call the car back in. So NASCAR now leaves it up to the crew, and the crews have found that in pit stops – where you are looking for an advantage of tenths or hundredths of a second – that it takes less time to tighten three or four nuts than all five.

Which has resulted in the occasional loose wheel – not loose in the sense of flying off, but loose enough to affect handling adversely.

“I guarantee you that envelope is going to keep getting pushed until somebody gets hurt,” Stewart said. “You will not have heard a rant that’s going to be as bad as what’s going to come out of my mouth if a driver gets hurt because of a loose wheel… With all the crap we’re going through with all the safety stuff, and for them to sit there and sit on their hands on this one – this is not a game you play with safety and that’s exactly the way I feel like NASCAR is treating this. This is not the way to do this.”

So Thursday afternoon, moments after welcoming Stewart back, NASCAR slapped him with a surprisingly hefty $35,000 fine under a rule that prohibits “disparaging” the sport or its leaders.

So Thursday evening, the NASCAR Sprint Cup Driver’s Council, which is just a group of 10 drivers that includes Stewart, announced that in support of Stewart, the Council would pay his fine. The announcement was made by driver Denny Hamlin, who, in 2013, was fined $25,000 by NASCAR after responding to an innocent question from a well-meaning NASCAR reporter (me) about how the new Generation 6 cars were working at Phoenix, the second race of the season.

“We have a lot of work to do to get these cars to where they can pass each other,” Hamlin said. “We didn't run as good as I'd hoped, but we finished better than I imagined. I hate to be Denny Downer but I just didn't pass that many cars today.” NASCAR figured that was worth $25,000.

Then as now, the comments from Hamlin and Stewart would have been largely overlooked were it not for the knee-jerk fines by NASCAR, which – if you check Google – took some warm quotes and set them on fire, many time multiplying the coverage of the incident.

And it doesn’t help NASCAR’s case that NASCAR’s VP of Competition, Scott Miller, said on Friday: “Since the drivers are now questioning it, it’s time for us to kind of re-evaluate our position and work with the community on looking at possibly different ways to enforce the pit-road rules.” Wait – only after Stewart made his comments is NASCAR thinking the lug nut deal over?

But we digress. This is about Tony Stewart and his return. He may never win another NASCAR race, and that's OK. He is arguably the toughest guy on the track, but when he wins three goldfish at the state fair, he makes a midnight trip to Walmart to buy them a $160 fish tank to live in, rather than flush them down the toilet. In a field of only mildly interesting drivers, he stands out like a Kardashian butt in a bunch of flat-asses.

It’s good to have Stewart and his mouth back. He’ll be happy to write $35,000 checks all year if that’s what it takes for him to be Tony Stewart again.