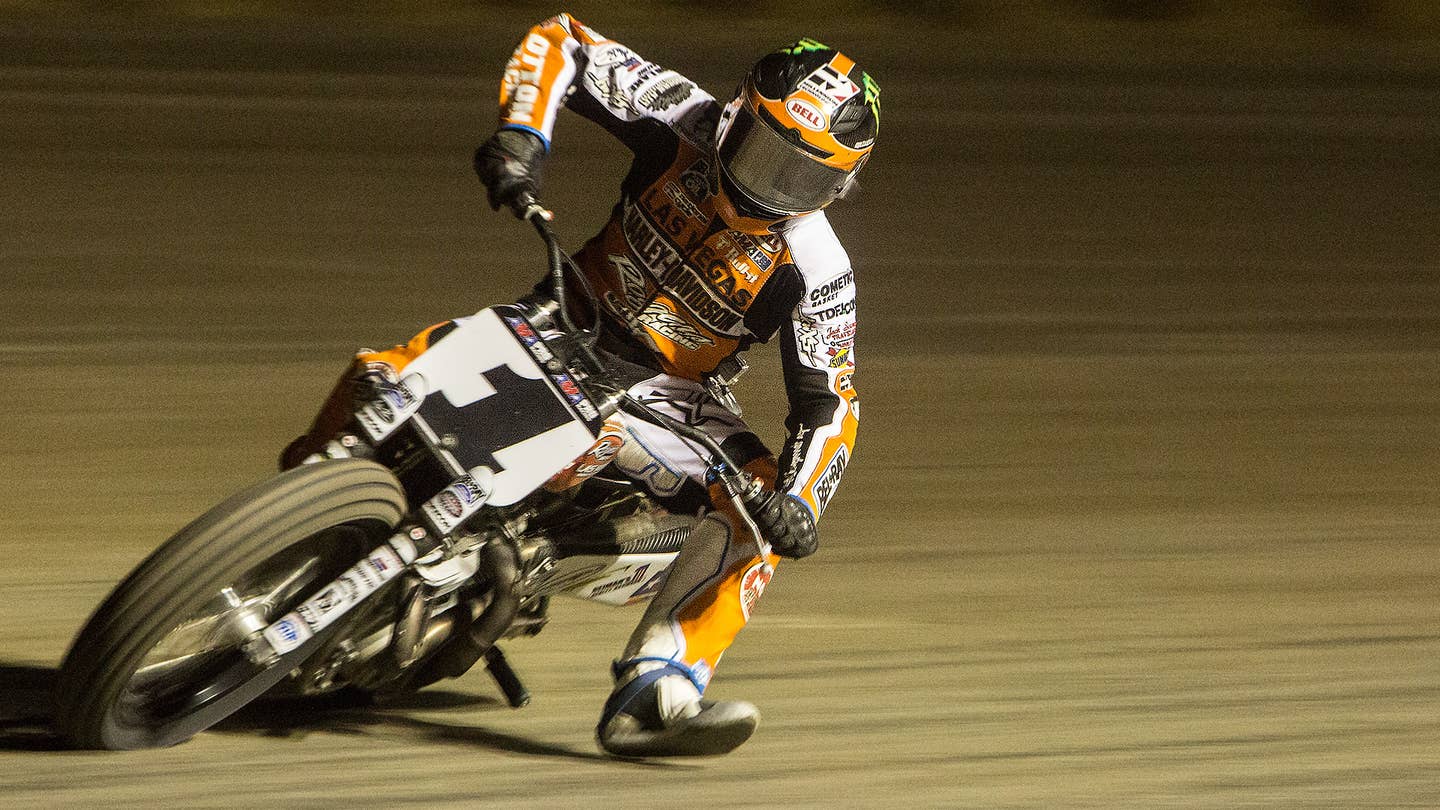 Some mad instinct compels a flat track racer. Picture 130 mph at the end of a straight, on slick-polished dirt, into a banked left-hander. No front brake. Your rear? You use that to initiate a giant throttle-on slide. The fast guys drag the rear brake so long and so deep into the corner that it glows. Steel shoes, clipped to the bottom of each racer’s left boot, skitter along providing balance and maybe, maybe, enough leverage to save a bike at the edge of control. Each lap is a batshit crazy act of balls and bravado, and the laps click past again and again and again.

It seems impossible when you watch it. Get up close, along the fence where the bikes deafen you a little more on each pass, pelting you with loamy soil and unburned hydrocarbons, and it seems unapproachable. Maybe it is. Getting a leg over one of the big 1000cc twins feels like certain suicide. And the 450cc GNC2 machines aren’t much slower. Even without a hungry pack of bikes on your heels, a long slide on a dirt bike is a pucker-inducing thing. But you can try.

Industry Speedway’s a delight. Some deeply Californian mix of equestrian center and race track, tucked into the hillside of an otherwise suburban neighborhood above L.A. On race night, Wednesdays during the summer, there’s a reliable Mexican cafe slamming together burritos long after dark. It’s a little window in time, back to when California was awash in racers and tinkerers instead of gamers and programmers.

The dirt frame is tiny. A 1/8th mile track of plowed and tended pillow-soft earth, inviting the inattentive to sprawl or go sprawling. A perfect place for American Supercamp to teach a guy like me a few things about sliding a motorcycle around.

It’ll put you in your place, Supercamp. Chipper little 125cc Yamaha dirtbikes are their weapon of choice. Machines that can’t even manage freeway speeds. About as far a cry from the snarling, wild AMA Pro Flat Track bikes as you can manage. But this is how it’s done.

The course curriculum was developed by guys like seven-time Grand National Champion Chris Carr. Blond and laid back 23-year-old Jake Gagne – by all appearances a harmless California long-hair – is one of the fellas coaching. He’s fresh off a MotoAmerica 1000cc Superstock Championship. There’s more to learn on these little bikes than I can even imagine.

Fundamentals: Body position. Eyes up. Throttle control. Basic, basic stuff, all stacked together as drills. Corners taken one at a time, speed ever increasing. Linking a corner to the next. It’s not long before I start pushing against my limits. Not long after that, I start falling down.

This is where my deep and fundamental respect comes from. Testing, trying, doing my damndest to stay upright and hang on while the bike slides under me, wider and wider. All of that energy, ever closer to unwinding all at once and sending me vaulting into space. My muscles burn and strain with the unfamiliar effort; the tendons on the insides of my thighs are so taught you could play them like cello strings. And then, for a few magical moments, it comes together.

I’m going all of 15mph, but it’s a slide. Long and glorious. My foot outstretched. My body loose, for once. And I get it, for that moment. And then I fall in the next corner. Again. Trying to turn hubris into speed takes instinct and balls. It takes a certain kind of grit.

So watch flat track racing. Choose a hero, you can’t go wrong. You’ll only wish you could ride like them.