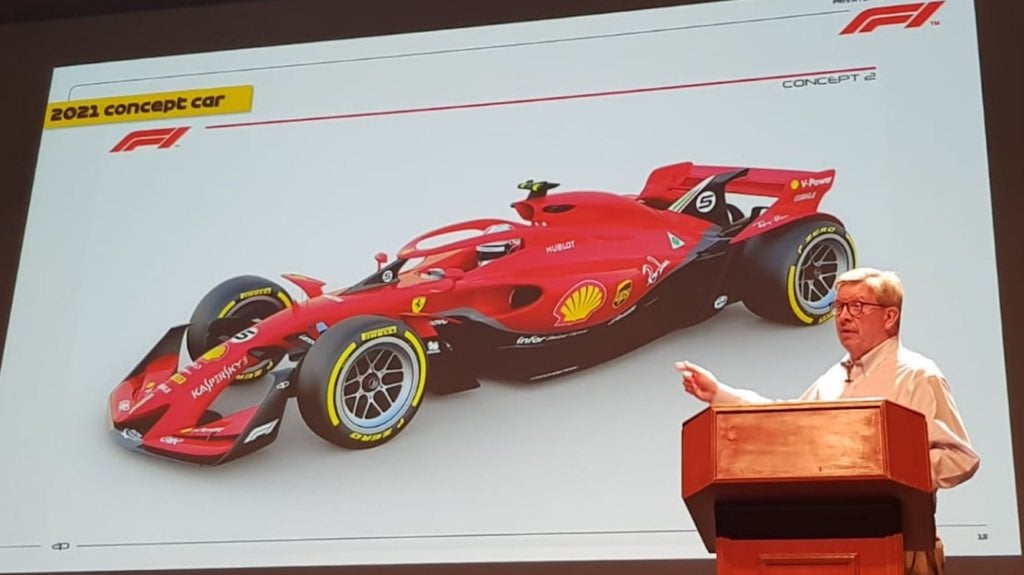 At an event leading up to this weekend's Singapore Grand Prix, Formula 1's Technical Director Ross Brawn showcased a concept rendering of the Formula 1 cars of 2021.

The concept combines a series of regulatory changes planned for 2019 and those expected in 2021. Simplified front wings and raised rear wings (both widened) will arrive next season as part of an FIA plan to reduce an effect called "dirty air," wherein the turbulent wake disrupts the overcomplicated aero of the following car. This is expected to reduce overall downforce, increase drag, and also increase the effectiveness of the Drag Reduction System (DRS). Overtaking in 2019 is expected to see a dramatic increase, though the quality of overtaking could diminish—we have an idea for fixing that.

Also displayed on this concept car are the 18-inch wheels already codified by the FIA for 2021's ruleset. This will also come with a potential change in the sport's exclusive tire supplier, to be finalized prior to 2020. Pirelli holds the current contract, which runs through the end of 2019. Though legacy brand Michelin has reportedly backed down from a tire supply bid, Hankook has reportedly thrown its name into the hat according to Auto Motor und Sport, so we may yet see a different name on 2021's tiny tire sidewalls.

Of the most interest to many Formula 1 fans is the potential engine regulation change due in 2021, which aims to simplify engine development and reduce costs. Disagreement between the FIA and suppliers over the plan to eliminate the complex and costly MGU-H, a hybrid energy recovery unit, could delay implementation of next-gen engine regs beyond 2021, but that just gives the FIA more time to play with our ideas for the next generation of Formula 1 engines.

The Finn rewrote Juan Pablo Montoya’s record for the fastest lap in Formula 1 history, averaging 163.785 miles per hour at Monza.