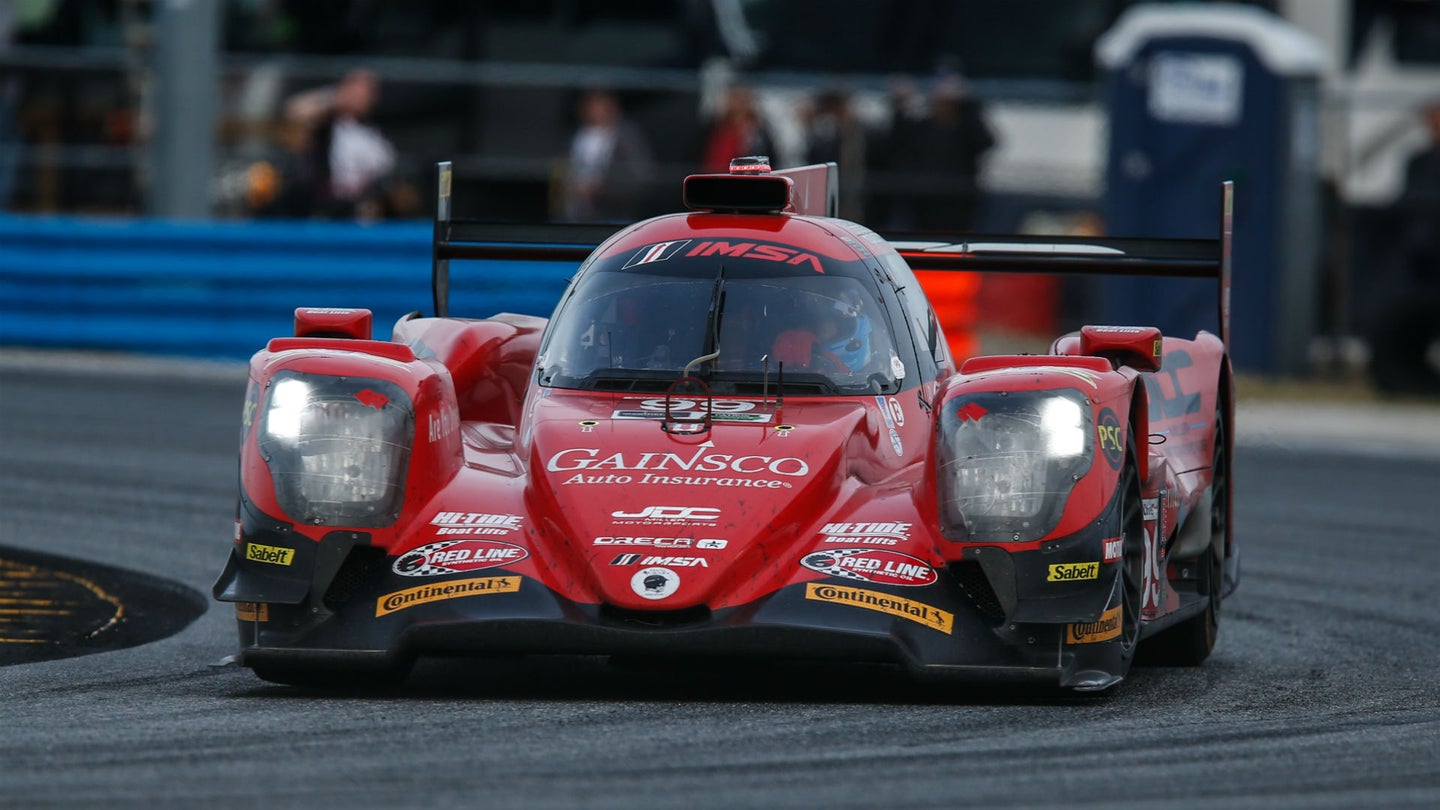 In what has been the best IMSA weekend of 2018 so far for the global-spec LMP2 cars, JDC-Miller Motorsports' No. 99 Oreca 07 Gibson has taken the overall win at Sunday's Six Hours of The Glen. Contesting against fellow P2-running teams at the front of the field, the tandem of Misha Goikhberg and Stephen Simpson outlasted the rest and finished 1.954-seconds ahead of the second-place finishing CORE Autosport crew.

A late-race move which saw Simpson drive three-wide to a pass eventually drove JDC-Miller to Victory Lane at Watkins Glen International. The Gainsco-sponsored car, in turn, earned its first IMSA WeatherTech victory—also a first in 2018 for the LMP2 field against the usually-dominant DPis.

Out of all the Daytona Prototype internationals, Acura Team Penske scored the best finish with a P3 from its No. 6 ARX-05 entry. They were quickly followed by the United Autosports Ligier in fourth while the top-performing Cadillac of Wayne Taylor Racing rounded out the top five.

Noteworthy action outside the top finishers included the dueling Team Action Express entries: The No. 5 Mustang Sampling crew as well as the No. 31 Whelen Engineering Cadillac. The two headed into Watkins Glen tied for the overall championship lead, but at race's end, it was the Mustang Sampling outfit that bested its rival by one position (P5 to P6), therefore leaping ahead outright in the title chase.

The No. 77 Mazda RT24-P was able to make the field after being rebuilt on Saturday following a rollover qualifying crash. The team of Oliver Jarvis, Tristan Nunez, and Rene Rast would conclusively finish 13th as a result of electrical issues and stopping on track in the final hour. Mazda Team Joest's other entry, the No. 55 car, finished in 10th behind JDC-Miller's No. 85 Oreca and AFS/PR1 Mathiasen's No. 52 Ligier.

Starting from outside pole, the No. 66 Ford GT duo of Joey Hand and Dirk Mueller corralled the GT Le Mans class victory at Sunday's Sahlen's-sponsored event.

This year's 'W' further promotes Chip Ganassi Racing in the record books as it has advanced its lead with the most wins at Watkins Glen to six. Additionally, Sunday's success marked the second class win for CGR as the team won at Daytona in January.

At race's end, three different manufacturers made the rostrum. With Hand and Mueller on the top step, the remaining two spots were filled by Corvette Racing's No. 3 C7.R and the No. 911 Porsche entry of Nick Tandy and Patrick Pilet.

Porsche's No. 912 RSR landed as best of the rest in fourth ahead of Corvette Racing's No. 4 racer. Following that up was the No. 67 Ford and, in the last two positions, BMW Team RLL.

The P1 result for Hand and Mueller promotes them to first in the championship, just one point ahead of their Ganassi teammates in the No. 67 Ford GT, Ryan Briscoe and Richard Westbrook.

Thanks to a final-stint falter by Land Motorsport's Audi R8 LMS GT3, Markus Palttala was able to commandeer the lead and secure a first-place finish in GT Daytona. The driver was able to complete the race ahead of Meyer Shank Racing's No. 86 Acura NSX GT3, which finished in second, as well as the Lamborghini Huracan machine of Paul Miller Racing.

Prior to retiring, the Land Motorsports Audi had been dealt two penalties that knocked it down in the standings. Sheldon van der Linde was given a 60-second penalty as the team worked on the car under closed pit lane conditions, but they failed to serve said penalty in time, resulting in a contention-ending drive-through.

Palttala reveled in his opponent's misfortune and drove the No. 96 BMW M6 GT3 to the checkered flag.