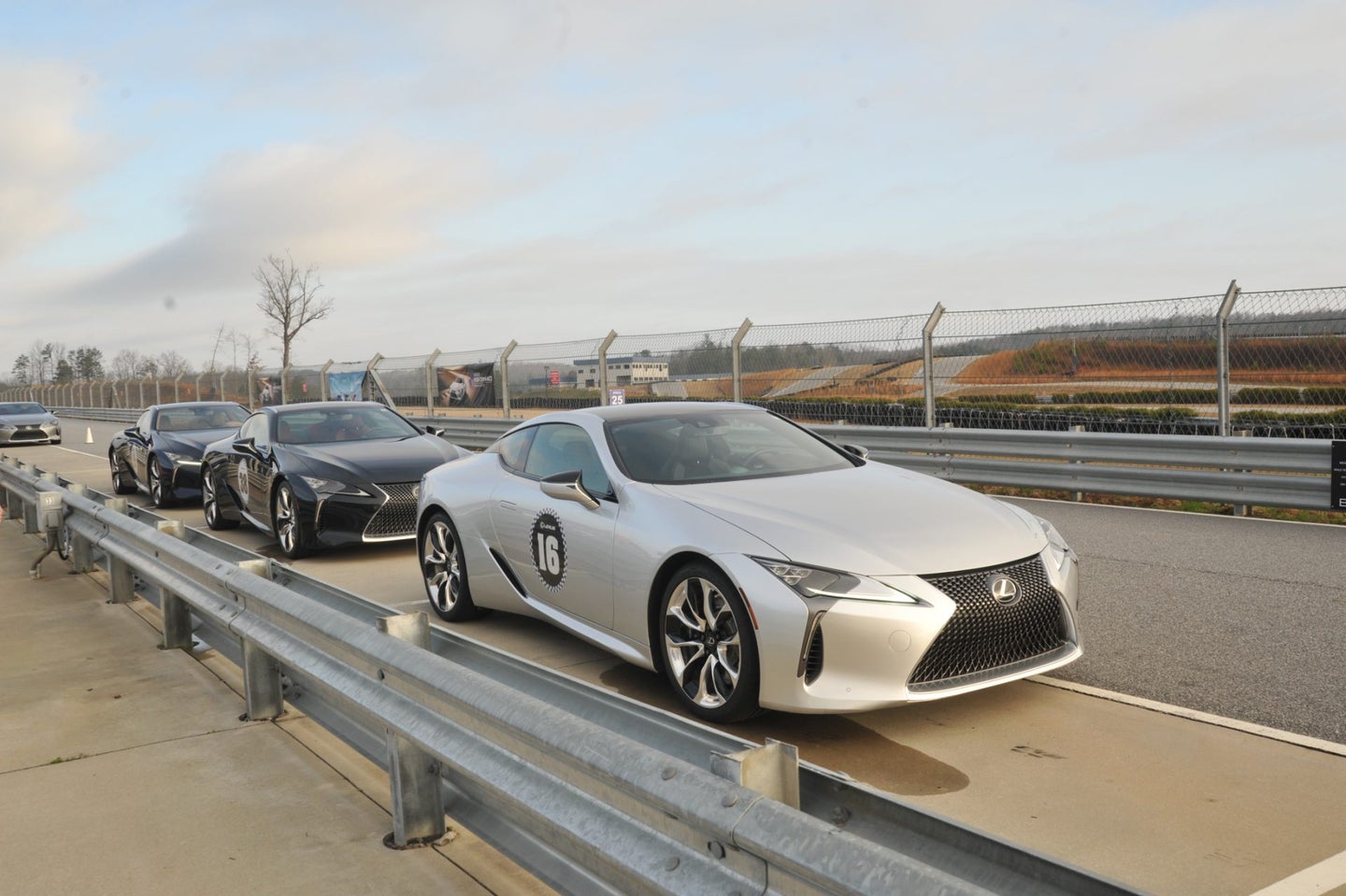 I was fortunate enough to be invited down to Atlanta Motorsports Park for a day at the Lexus Performance Driving School. After showing up to track at the crack of dawn, I spent the next nine hours getting a feel for the Lexus performance lineup. Here's a breakdown of the day's events.

After a quick breakfast, the event's participants were herded into a meeting room. There, Lexus drivers gave the group the rundown on driving lines, brake zone, apexes, and weight transfer, as well the capabilities of the cars that we would be driving. Recently retired racing driver Scott Pruett was then brought up to give the green light for the day's events.

After Scott's pep talk, my group was escorted to a group of about a million dollars worth of LC500s lined up in pit lane. We put on our helmets, picked our cars, and followed an instructor out onto the track. It was basically an expensive game of follow the leader.

The Lexus driver in front set a casual pace with the cars behind him doing their best to ape his driving line. The apexes and braking zones of the Atlanta Motorsports course were clearly marked by cones, taking out most of the guesswork of driving on an unfamiliar track. After the morning's warm-up, we were allowed to push the cars much harder in the afternoon session.

Initially, I was a bit nervous that the 470-horsepower and 4,300-pound LC500 would be a handful in sharp corners. It only took a couple laps to completely dispel that fear. The 275 millimeter wide Pilot Super Sport tires, combined with four-wheel steering, give the LC an unbelievable amount of front-end grip.

While the Lexus instructors were adamant that we left driver assists on, I can only recall the stability management light coming on once during my track time. For a car that was designed as a grand tourer, it's amazing how hard the LC500 can corner, and it inspires confidence in an unfamiliar driver almost immediately.

The only negative point I can make about the LC is its transmission. On track, I barely used half of the gears available in the 10-speed auto. Using the steering-wheel-mounted paddles, I found both up and downshifts to come quickly and smoothly, when they did come. The transmission tries a little too hard to babysit the driver. Any downshifts attempted outside of the computer's approved rev range will be met with nothing but a discouraging beep. I don't think my skill level was the deciding factor, as I also noticed pro driver Scott Pruett being denied shifts.

As for the course, I think Atlanta Motorsports Park is good for beginners. The track isn't really fast enough to get into to much trouble, but there are a lot of elevation changes to keep things interesting. At the end of the back straight, the LC500's HUD indicated about 95 miles per hour. The trickiest part of the course is turn one. The driver has to brake hard coming off the straightaway and hook left about 120 degrees as they make their way downhill.

Atlanta Motorsports Park features a fairly large skid-pad, complete with a sprinkler system to make its surface as slippery as possible. To make breaking the rear tires as easy as possible, participants also kept the RC F in first gear, with stability and traction control all the way off. As many a Mustang driver learns, having a lot of power does not magically turn you into Ryan Tuerck. Initially, my time on the skid-pad was spent spinning in circles. After an instructor gave me the advice to keep an eye on the cone that I was sliding around, drifting became a bit easier. By the final session, I was able to chain a couple slides together and maneuver the RC F around a figure eight.

Autocross in the GS F

The third task in the Lexus Performance School was navigating a GS F sedan through an improvised course of chalk and cones. For this event, the cars were set up with "slalom mode," which tunes the rear differential to respond to quick left-right movement. Although I barely hit 40 miles per hour on the autocross course, I had a total blast. The GS F lacks the LC500's super-powered grip, making for some tire squealing understeer at the limit. All the fun was in finding the balance between the car's power and tires. After a total of eight tries, my fastest time around the autocross was about 24 seconds, with the best times being in the 21-second range.

By the end of my track session, I thought I was hot stuff, but riding along with a 24 Hour of Le Mans winner quickly put me back in my place. Scott was able to wring more performance out of the LC500 than I could ever dream of. Turns that I was taking in second gear, he blew through in fourth, all while making casual conversation. Despite the huge step up in speed, I had a pretty comfortable time in the right seat. Scott's skill and demeanor could inspire confidence in even the most nervous passenger.

Overall, I'd say the Lexus Performance School is a great way to get for beginners to get experience on the track. At $895 for the full-day package, the price is on the steep side, but it's a good value for the amount of track time that the customer gets. At a regular track day, a participant would have to pay a few hundred dollars and cover the costs of their own vehicle. For a bit more, Lexus gives you a selection of cars to beat on, guilt-free. If you're interested in all that, check out the Lexus Performance website for an event near you.

The movie is a success, but Lexus took some big risks getting involved as much as it did.