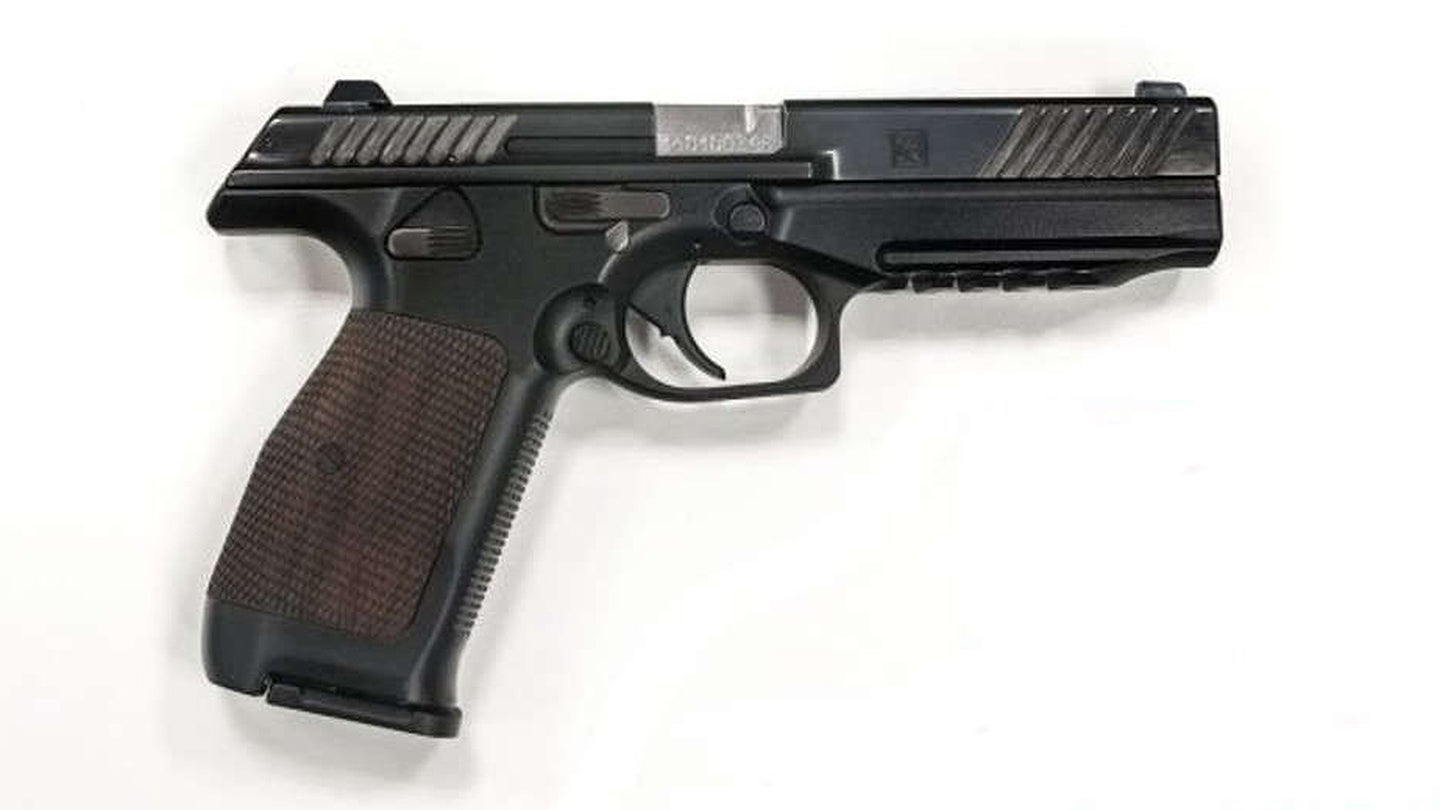 The late Mikhail Kalashnikov, the legendary engineer who designed the instantly recognizable AK-47, once quipped that he wished he’d made an equally popular lawnmower. Today, the company that now bears his name has stuck with guns and hopes its Lebedev PL-15 pistol will be as successful as the iconic assault rifle. Unfortunately, it has to contend with a shrinking Russian defense budget, political wrangling, international sanctions, and more first.

In 2015, the Kalashnikov Concern, previously known as the Izhevsk Mechanical Plant, or just Izhevsk, formally announced the Lebedev PL-14 at the annual Army International Military-Technical Forum in Moscow. The next year, the company unveiled the improved PL-15 version, though many sources continue to use the older nomenclature.

“Trials are currently under way and we hope that they will be completed this year,” Kalashnikov’s CEO Alexei Krivoruchko told the Russian government-owned TASS news organization in March 2017. “We hope that the pistol will be sought after by the Defense Ministry and other uniformed and law enforcement agencies.”

For troops and cops there might be a lot to like about the PL-15. Chambered for the ubiquitous 9x19mm round, the handgun has a nearly 5 inch barrel and is just over 8 inches long overall. Some versions have a slightly longer, threaded barrel that can accept a suppressor, an important feature for special operations forces. The gun is also unique in that its chamber can also accommodate cartridges with longer than average bullets.

In its prototype form, the PL-15 weighs just shy of 1.8 pounds. Kalashnikov hopes to eventually reduce that figure by using a polymer frame instead of an aluminum one. In addition, the existing models have an accessory rail that can accept lasers, flashlights and other common accessories. The gun features ambidextrous controls, including an inset manual safety and a shrouded hammer. There is also a loaded chamber indicator and designers focused specifically on reliability and ease of maintenance.

In addition, the Lebedev design is double-action only, meaning that the shooter cocks and releases the firing mechanism each time they pull the trigger. Though a long-standing debate continues, many engineers and experts feel double-action mechanisms are inherently safer if an individual wants to carry the weapon ready to fire with a round loaded in the chamber, and especially for those pistols without a manual safety. In a single-action arrangement, the hammer or striker would be poised to spring forward and fire the cartridge, which could happen accidentally if the shooter hit the trigger inadvertently. Usually single action firearms features a much lighter trigger pull as well.

With double action pistols, there is also often a noticeably longer, heavier trigger pull, since the movement has to re-cock the action every time for safety purposes. This in turn can potentially throw off a shooter’s aim. Of course, training and experience could easily mitigate these issues and some firearms, such as the Glock, have near single action weight trigger pull (around 5.5 pounds), but function as if it were a double action pistol.

The dimensions and features make the gun larger and heavier than the Cold War-era 9x18mm Makarov PM-series, but similar in size to the more recent Russian military designs, such as the 9x19mm MP-443 and OTs-27. With a new frame made of rugged plastic, the Lebedev would probably have a similar weight to KBP’s polymer-framed GSh-18. Kalashnikov also makes the PM and MP-443.

The PL-15’s most distinctive feature is a grip that encourages the shooter to take a “high” grip on the gun. This gives the weapon the appearance of a competition pistol rather than a military handgun and offers a very low bore axis, which helps with managing felt recoil and speeds up the time it takes to get the pistol back on target.

All this is entirely by design. As it crafted the pistol, Kalashnikov consulted with prominent Russian target shooters, as well as elite military and police personnel, according to TASS.

“Before I shot it, I was a little concerned it [the configuration] would hurt the ergonomics,” Larry Vickers, a veteran of the U.S. Army’s Delta Force and a noted firearms instructor, explained in a video review in 2015. “Actually it doesn’t. You get very high on the gun, you can still turn and get to the magazine release very easily.”

On the inside, Kalashnikov made sure the PL-15 could handle the Russian military’s standard 7N21 round, which is significantly more powerful than many commercial 9x19mm loads. On his website, Russian firearms expert Maxim Popenker says the gun’s estimated service life with this ammunition is at least 10,000 rounds and could be two or three times longer if the user stuck to more common cartridges. Also these estimates are usually far lower than reality, especially as the firearm design matures.

Of course, even if these features prove appealing and the guns perform well in the unspecified trials Krivoruchko mentioned, there’s no guarantee the Russian military will adopt any version of the Lebedev. As in most countries, the new weapon will immediately have to overcome budgetary and political hurdles.

Since 2014, the drop in the global price of crude oil, a major Russian export, and international sanctions on the government in Moscow have led to a significant decline in the overall Russian economy. The United States and the European Union both imposed travel and trade bans in protest over the Kremlin’s activities in Ukraine and Syria.

In October 2016, reports began to appear suggesting the Kremlin might have to reduce defense spending by as much as 30 percent in the coming year. At least one expert suggested the actual cuts would amount to less than 10 percent, but this would still be significant.

This isn’t the first time a Russian gun maker has tried to upend the country’s pistol market, either. In 2012, Russian firm Arsenal Firearms offered its own Strizh—meaning “swift bird” in Russian—as a potential replacement for military and police sidearms. Unnamed sources disputed whether mechanical troubles or politics scuttled those tests, according to Popenker. The company’s Italian subsidiary now makes a commercial variant called the Strike One for sale primarily in Europe and the United States, but it has achieved modest sales at best.

If the PL-15 runs into resistance in Russia and Kalashnikov turns to the international market, the handgun would be competing with many established designs, including the Beretta Model 92, FN FNP-9, and the Sig P320, which won the U.S. Army’s XM17 pistol competition in 2017. A version with plastic components would still be akin, at least in overall bulk, to the Heckler and Koch USP and internationally-recognized Glock 17.

Companies around the world offer dozens more 9x19mm pistols in various configurations. Many of these handguns also come in other calibers, including .45 ACP—exceptionally popular in the United States civilian market—and .40 Smith and Wesson, a common law enforcement choice. It is possible Kalashnikov could develop additional PL-15 variants to meet these demands.

Sanctions might put U.S. customers completely off limits, too. Before American officials hit Moscow with trade and other restrictions in 2014, Kalashnikov had established a division in Florida and was expanding its business in the United States, even considering hiring action movie star Steven Seagal as a “brand ambassador” at one time. Afterwards, Kalashnikov USA severed ties with its Russian parent and went its own way.

Whether this now-independent company could license production of the PL-15 is unclear. Vickers only got his chance to shoot one during a visit to Russia.

Still, in February 2017, Kalashnikov reportedly hired more than 1,500 new employees to meet increasing export demands. The company has major military clients around the world for its rifles and shotguns. Many of these deals are subsidized by the Russian government through low-interest or no-cost military aid grants to allies, such as Belarus and Venezuela. The bottom line is that Kalashnikov has an almost religious following around the globe, a fact which which could lead to high interest in the PL-15 as a companion to the rugged AK-47 and its many sub-variants.

The worldwide success of the AK-47 family owes a great deal to the Soviet Union, sending hundreds of thousands of them to partners during the Cold War, too. It might take a similar push for if Kalashnikov wants its new handgun to be anywhere near as prolific.