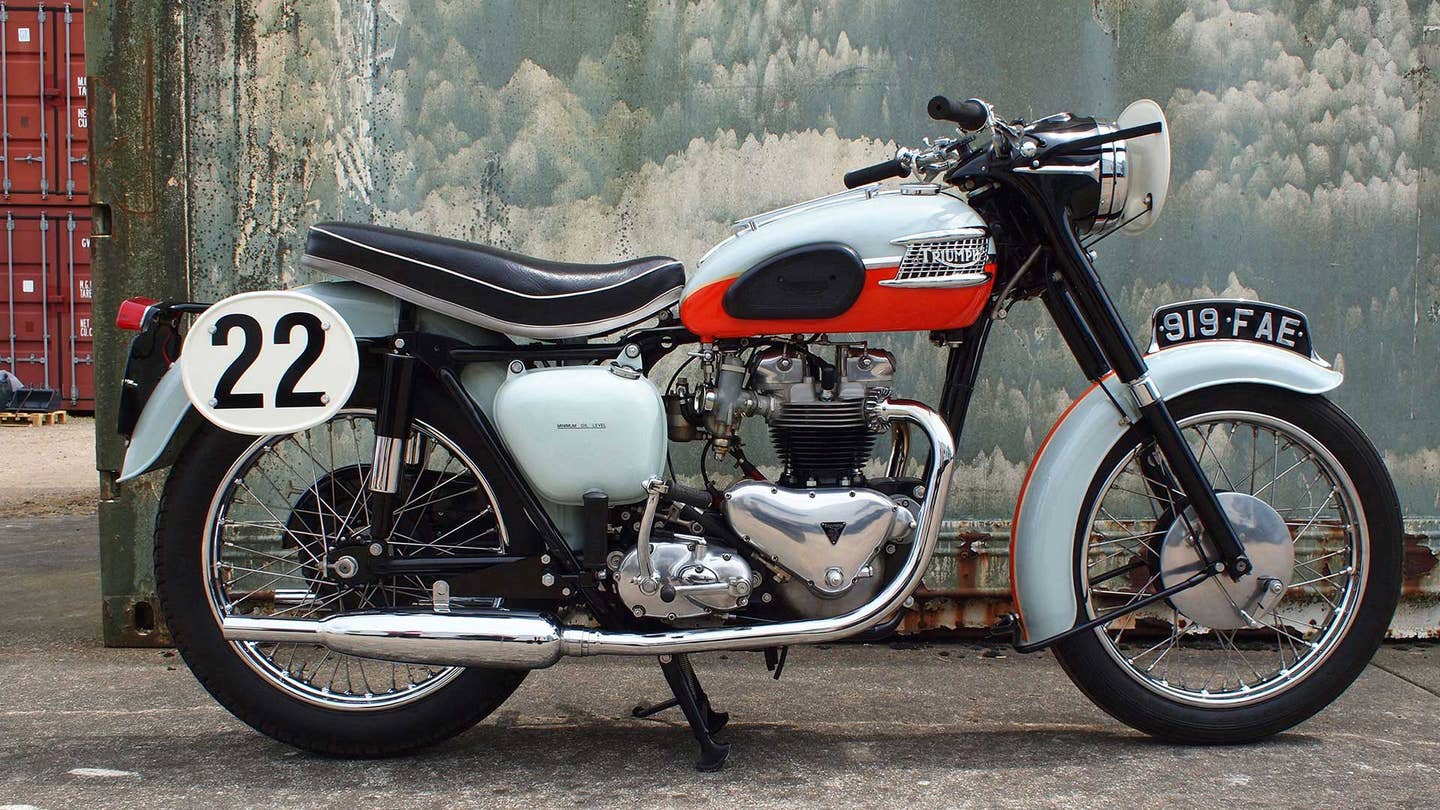 When it comes to freedom, nothing beats a motorcycle. Carving through corners, savoring near-instantaneous throttle response, you’re totally committed, balancing and defying gravity at once, inhaling the outdoors. Why a vintage bike rather than something new-fangled? There’s a reason we call these classics. Mechanical simplicity often means they’re easy to maintain, and there’s just something intangibly stylish about an old motorcycle. Also: the price. Sure, you can ride off on many new bikes for less, but would those be bikes you'd worship? Serviceable examples of these 10 old-school motorcycles can all be found for $10,000 or under… if you know what to look for.

Here are our picks for the best affordable vintage bikes, and some advice for potential buyers, counting down to number one.

Birmingham Small Arms produced weapons for the British military, which made the transition to manufacturing motorcycles during the Thirties a comparatively easy leap. I grew up lusting after BSA Road Rockets, and I owned a DBD34 Gold Star Clubman for a while; they’re collector items now, but you can still have the last of the “Beezas”—the inimitable Rocket 3—for under $10k. By the late Sixties, once fierce rivals BSA and Triumph had banded together for survival. Thus the Triumph Trident and BSA Rocket 3, designed by Triumph in Meriden, England, and both built by BSA at its Small Heath factory. The Rocket 3 was a 740-cc transverse triple (but slanted forward versus the Triumph’s engine), developing 60 horsepower and sporting signature “ray gun” mufflers. It had a twin-leading shoe-drum front brake, not a disc, barely adequate for the 120-plus-mph top speed. Check engine serial numbers to ensure someone hasn’t swapped in a Triumph motor. Rocket 3s are still nice bikes, even though they presided over BSA’s demise.

When it first appeared in 1972, the Z1 was the most powerful Japanese four-cylinder, four-stroke bike marketed to date. It won just about every motorcycling award, establishing Kawasaki as a versatile manufacturer. The Z1 (and its two updates, included here) was capable of 130 mph with, for its time, astounding acceleration. This necessitates frequent rear tire, chain and rear shock-absorber replacements. The DOHC, 82-hp, all roller bearing transverse-four came with optional electric start; purists clung to the lighter kickstart assembly. The disc/drum braking combination could be supplemented with an optional (and easily retrofitted) second front disc. Dave Minton and Frank Melling, authors of the classic book Superbike, wrote: “It looks just what it is—a massive roadburner and proud, too… A bewildering experience.”

Italdesign’s Giorgetto Giugiaro—famed designer of the original Maserati Ghibli and DeLorean—penned the angular 860GT. According to noted Ducati authority Mick Walker, the bike was “a far cry from the previous raw-boned Ducatis and was intended to open up a whole new dimension for the factory and its potential customers.” Some didn’t like the styling, so it wasn’t a sales success in the U.S. Which is precisely why it’s affordable today. The 864-cc, 90-degree bevel twin is quintessentially Italian, delivering a visceral torque punch and aural delights. Left-side shifting was standard, and the bike shared the Ducati 750 Sport’s twin 32mm Dell’Orto carburetors. If you can stretch a few more bucks for one of the 860’s successors—the 900 GTS (1976-1978) or 900SD Darmah (1977-1980)—you’ll be even happier.

I’m not a Japanese bike devotee, but I was smitten with the Katana when it debuted. You ride low over this big 1100-cc four-cylinder in a racing crouch. Aside from its stout 108-bhp and 140-mph whack, astounding in its day, the Katana’s angular "Star Wars" styling, pale gray livery and edgy quarter fairing made it a standout. In a break from tradition, Suzuki farmed out design work to a European company, Target Design, whose stylists—Hans Muth, Hans Georg Kasten and Jan Fellstrom—were reportedly given free rein. It shows. Suzuki went on to market a range of hyper-quick GSX-R models, with AMA Superbike racer looks and wicked performance. But the original Katana’s impact, presence and sheer design audacity was never equaled. You’ll have to hunt for one of these first-edition Katanas. Grab one if you can; these have great potential to increase in value.

Harley-Davidson has offered the Sportster model since 1957 in countless variations, with ever-increasing displacements from 883 to 1,200 cc. It’s always been lighter, more agile and, dare we say, better-looking than the Milwaukee firm’s classic big machines. From the beginning, a Sportster could accelerate with the quickest Britbikes, save for the legendary Vincent Black Shadow. The improved “Evolution” engine arrived in 1986. A five-speed gearbox was offered in 1991. Until 2003, Sportster engines were hard-mounted to the frame, so beaucoup vibration came standard. A good black-on-black XLCH (unofficially: “Competition Hot”) café racer is probably out of our price range, but there are XLR, XL, XLT and XLS examples out there under 10 grand. And, of course, a host of accessories from HD lets you customize your Sportster to your heart’s content. These bikes are fully accepted by the hardcore Harley crowd, even if you don’t wear one of those dumbbell dome “Helmet Laws Suck” head covers.

The CB-750 was the first Japanese superbike. “There had never been anything like it before,” Cycle Magazine editor Phil Schilling later wrote. “It was a logical motorcycle without peer.” Stylish, quick and powerful, the transverse-mounted CB’s four-cylinder trumpeted to the struggling British bike industry that the end was nigh. Italy’s MV Agusta offered a hyper-expensive road-going inline-four model, but it took Honda to market the affordable, easy-to-maintain machine that took the I-4 mainstream. The CB750-4 was a marvelous bargain at the time, an astonishing $1,495. For that, you got five speeds, electric start and a front disc brake, the first on a true mass-production motorcycle. Also, a 67-hp, single-cam, quad-carb engine that revved to 8,000 rpm, not to mention a 120-mph top speed. Honda sold plenty, so hold out for the best example you can find, the earlier the better.

A proud British name for decades, Norton was synonymous with the famed Isle of Man TT races. The Commando appeared in ’67 with a newly imagined frame designed by a former Rolls-Royce engineer. It held a parallel-twin engine, tilted slightly forward and mounted in rubber to mitigate vibration. This bike enjoyed success racing, as well as a successive half-decade of Motor Cycle News “Machine of the Year” awards. Displacement grew, from 750 to 850 cc, in 1973. Although the company seemed to be at death’s door, Norton managed to offer the handsome, fairing-equipped John Player Special Norton (JPN) in 1974. The following year, U.S. buyers could order the Mk3 Commando Interstate or Roadster with electric starting, left-side shifting and sexy black and gold livery. You won’t find a John Player Norton for our budget but, in good shape, a base Commando offers buckets of coffee-getting pleasure.

The classic R-Series can be everything, from a sports bike or grand tourer to a solid platform for sidecar work. Some can fetch big bucks, but they’re available in decent shape within our budget. BMW styling and engineering are wonderfully predictable. It’s all so well thought out, the big 6¼ gallon gas tank with its rubber knee pads; flat handlebars; comfortable foot-pegs; and extended telescopic forks. Solid engine architecture, too: a horizontally-opposed twin cylinder, available in displacements from 500 to 1,000 cc’s. Twin carburetors at your toe tips, the clean and efficient shaft-drive setup… Although there are more modern configurations, BMW still makes the basic flat-twin, and devotees swear by it. The Bavarian’s drum brakes are very good for the era, but we prefer a front disc. Find a good R90S and you’ll quickly become a Beamer fan for life.

Long one of Italy’s primo motorcycle racing firms, Moto Guzzi’s road-going sports bikes are lusty, too. The Le Mans Series, especially the ones from 1976-1978, offer plenty of power and a stirring poom-poom-poom exhaust note that’ll make you smile every time. Guzzi aficionados loved these from the get-go. The Le Mans formula: a race-oriented matte black frame and exhaust system, high-compression (10.2:1) pistons, 36mm Dell’Orto carbs, bikini fairing, clip-on handlebars, triple-drilled disc brakes, clean and easy-to-maintain shaft-drive and a 124-mph top speed. The torque-rich, 71-hp V-twin was mounted crossways, unlike a Ducati or Harley's engine, requiring gymnastics to avoid the protruding, hot cylinder heads on each side. Once you’ve figured that out, with splayed knees akimbo, just lean into a turn and revel in this bike’s crisp handling and acceleration.

Triumph motorcycles symbolize an entire generation’s passion for riding. Brando rode one in The Wild One, McQueen in The Great Escape. The Bonneville—named for the famed Bonneville Salt Flats in Utah, where Triumph set many land speed records—was the cool bike to own when it arrived in the Sixties. It still is, and our $10k budget can get you on a terrific example. Lindsay Brooke, author of three books on Triumph motorcycles, notes: “The iconic T-120R Bonneville remains Triumph’s stud machine for collectors, with 1968 to 1970 representing the best of the breed—12-volt electrics, twin leading shoe front brakes, improved engine breathing and steering geometry, and flashier livery.” Late-Seventies T140 Bonnevilles came with American-market high handlebars, left-side shifters and a single front disc brake; for 1980, the T140ES offered electric start and disc brakes all around. Today’s Triumphs are very contemporary bikes, but there’s nothing like a classic big twin with wire wheels and aftermarket megaphones. Find a good one, and you’ll be on the absolute pick of the Britbike litter.

Ken’s Tips: Never buy sight unseen, and inspect the machine carefully for crash damage, rust, errant wiring and non-original or poorly judged upgrades. If the tires are more than a decade old, no matter how good they look, replace them. Along with eBay and Craigslist, you can find old motorcycles at CycleTrader, Walnecks, Barn Finds, Bring a Trailer, Hemmings and Old Cars Weekly.