Deuce Days is the biggest gathering of '32 Fords in North America. 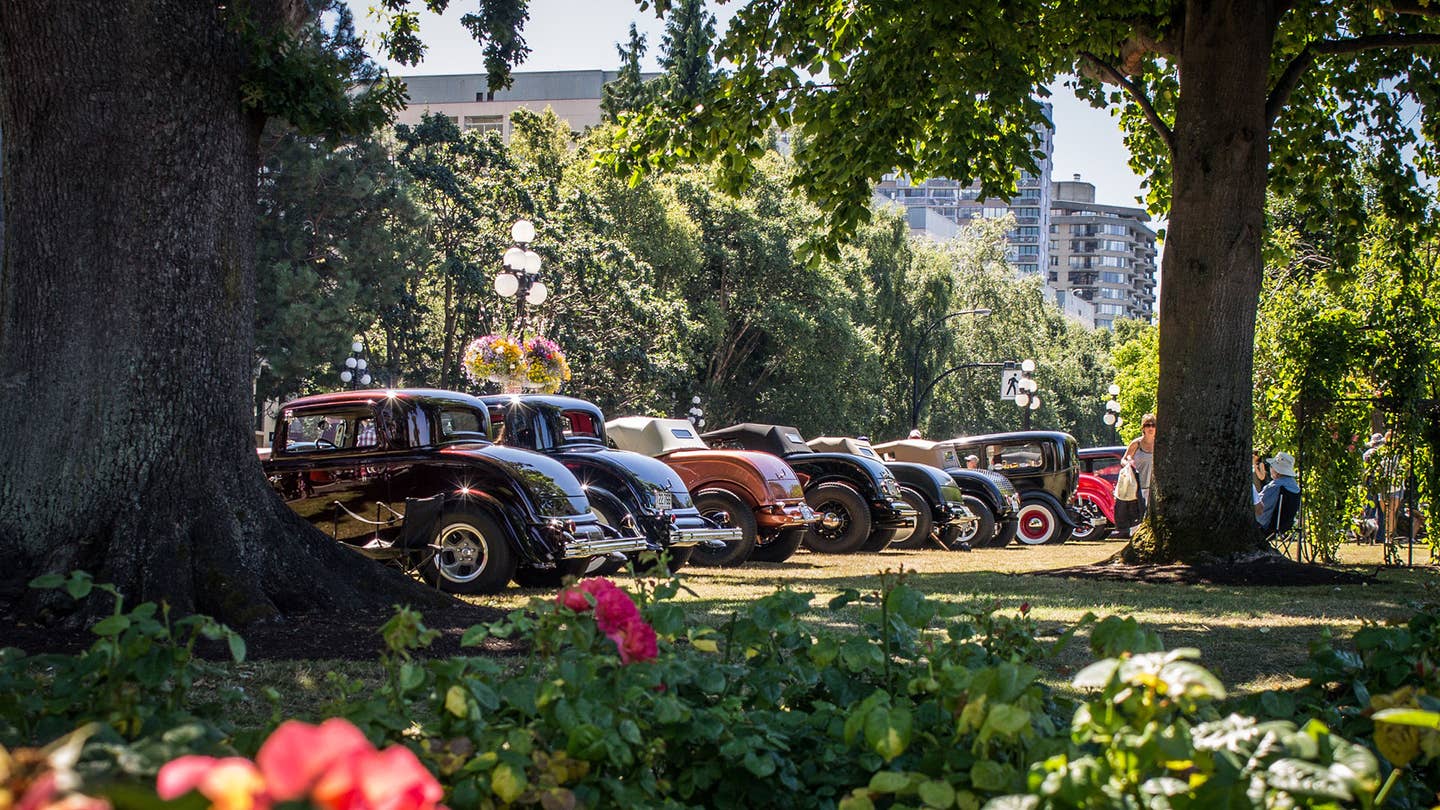 America's love affair with the V8 starts here. Stung by losing sales to Chevrolet's six-cylinder cars, Henry Ford embarked on a stubborn quest to provide an eight-cylinder offering as a replacement for the Model A. When he revealed the machine in March of 1932, it had a 221ci “flathead” V8 making 65hp and 130lb-ft of torque. Ford called it the Model 18. We'd all come to know it as the Deuce.

Eighty-four years later, 1100 '32 Fords circle the inner harbor in the picturesque seaside city of Victoria, in the Canadian Northwest. It is the single largest gathering of its kind in North America. There are highboys, roadsters, chopped coupes, and pickup trucks. There are gassers, dragsters, show queens, and road warriors. The cars are louvered, chrome-laden, patina'd, or dripping with lustrous paint so deep it probably adds fifty pounds to the curb weight.

There are larger car shows held up and down the West Coast, but Northwest Deuce Days is far and away the largest single-model hot-rod event. Starting off in 2000 with a few dozen cars, it has increased exponentially over a decade and a half. Currently held every three years, Deuce Days has expanded to take over the entire weekend, including gala dinners and a poker run. Sunday is show day, and the crowds seethe in the sunshine, with custom machines parked right up on the lawns of the Province's parliament building.

Victoria has a milder climate than most places in Canada, and with a well-established population of retirees. The roots of the original British colony remain, and on ordinary weekends the inner harbor is a nice place to take a quiet walk, a carriage ride, or just watch the float planes come in to land. It is a place of leafy streets and late brunches, a tourist destination where the ivy-covered Empress hotel still serves afternoon tea.

Imagine the fluster in such a place as a ferry arrives from Washington state with some three hundred bellowing hot-rods, all flame and fuel and thundering sidepipes. And yet it all seems to work: the city shuts down its main streets and lines the cars up with yachts and water taxis as the background. It's American Graffiti, Canadian style: all the firepower, but everybody's polite.

It doesn't matter whether you're a leathery old hot-rodder or a drift kid in a flatbill hat, the '32 Ford is the genesis of high-speed car culture. While there were, of course, faster cars at the time – later models of the Deusenberg SJ had above 400hp – the Model 18 brought power to the masses. It was simple, tough, pretty, and durable, and birthed a culture where modification had no limits beyond skill and imagination.

It's no secret that Henry Ford admired Thomas Alva Edison's way of doing things. Trial and error were the Deuce's midwives, not to mention a healthy dose of megalomania and paranoia. Ford ran multiple teams of engineers into the ground when developing the first flathead V8, imposing seemingly arbitrary restrictions and preventing employees from speaking with each other. There was a constant worry that competitors like Chevrolet would find out what Ford was doing. Really, only Henry seemed to have a plan.

The team of Carl Shultz, Ray Laird, and Fred Thoms worked in secret, labouring away in Edison's old laboratory – Ford had bought the place and had it reconstructed in Dearborn. They worked with sketches instead of engineering drawings, working at a gruelling pace deep into the night. Ford, a farmer by birth, favored this hammerheaded approach to engineering, and was always hovering, obsessed with besting Chevrolet. The V8 was rushed into production in just sixteen months.

The body of the '32 was surprisingly simple and beautiful, thanks in part to Ford's son Edsel. While his name is now synonymous with the homely sedan from the late 1950s, Edsel was responsible for hiring Eugene Gregorie, who would go on to design everything from the first Lincoln Continental to the '49 Mercury. The 1932 Fords were his first effort.

Available in fourteen different body styles, the '32 Ford was just the car Depression-era America wanted. The stout V8 was cheap enough to be affordable for people who were still watching every nickel carefully. Ford sold thousands of them – compared to the four-cylinder variants, the V8 cost just $50 more.

As Ford continued to refine its flathead V8 over the next few years, it became the choice of a variety of miscreants. Notorious bank robber John Dillinger wrote to Henry Ford, thanking the company for making such a fast machine so that Public Enemy Number One could escape the law. Meanwhile, used '32 Fords started ending up in the hands of young speed demons like Vic Edelbrock, who began running them at the Bonneville salt flats. In the post-war years, the Deuce became the definitive hot rod.

In the sunshine of 2016, the Deuce still glitters with past and present glory. It's more a baby-boomer's dream ride these days than an accessible doorway to speed, but that doesn't mean they don't still get used the way they're supposed to. One weathered highboy bore more than 200,000 miles on the odometer.

Come Sunday evening and some hot-rodders will carefully load their cars into trailers and head home to prep for the next show on the circuit. But some will head back to their motel for an early night, with plans to make miles in the morning, headed North or East or South. Eighty-odd years later, out on the open road, the Deuces still run wild.