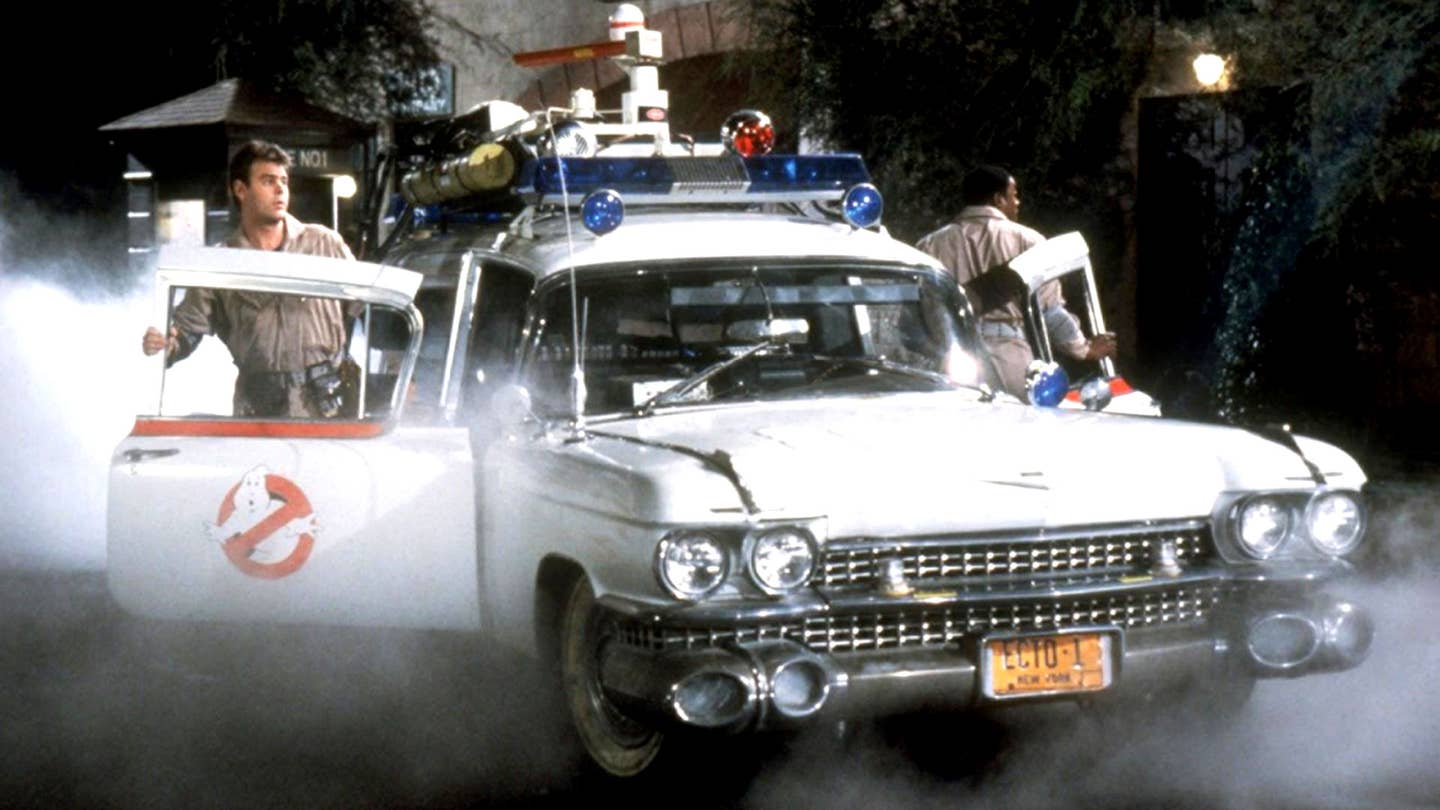 Tomorrow, the Ghostbusters reboot premieres. The one with an all-female cast featuring Melissa McCarthy, Kristen Wiig, Kate McKinnon and Leslie Jones. Perhaps you’ve heard things about the flick, thanks to the extremely divisive reviews it’s getting. (Slate has an interesting theory about how all the negative reviews are from male critics, by the by.)

But we’re not here to debate the quality of the film. We’re here to talk Ecto-1. No, not the new film's ‘80s Caddy hearse that was recently bopping around as a Lyft ride—the original Ectomobile, a beautiful 1959 Cadillac Miller-Meteor ambulance conversion. Here are some surprising facts about gloriously-finned, specter-fightin’ wagon.

Miller and Meteor were initially competing companies. Wayne Corporation, an Indiana company that made buses, wanted to diversify. In 1954, they purchased Meteor Motor Car, which built limousines and ambulances. Two years later, Wayne bought A.J. Miller Company, maker of hearses and ambulances. Wayne aligned the two former competitors and by 1957, they were a well-oiled machine. Two years later, the base model for the Ecto-1 rolled out of the Piqua, Ohio plant.

The tailfins were the largest to appear on a production car. They’re the same from the 1959 Cadillac Eldorado

The Miller-Meteor production run was very limited. Only about 400 vehicles were made. The powerplant was a 6.3-liter V8, good for 320 horsepower. Seems like a lot until you factor in the car’s curb weight: around three tons. At nearly 20 feet in length, the Cadillac Miller-Meteor was an unwieldy car to handle, though it was a smooth ride thanks to an air suspension system.

Early scripts called for a 1975 Cadillac ambulance. Though by the time the final shooting script was locked in, the 1959 model was settled on, though the purchase price was too low at $1,400. The cost Ray Stantz (Dan Aykroyd) mentions in the film, $4,800, was more believable.

Originally, Ecto-1 was imbued with a more sinister presence. Aykroyd, who co-penned the initial drafts with Harold Ramis, described the Ecto-1 as black with purple-and-white strobe lights giving it an ethereal, purple glow. It was also to have supernatural powers, including inter-dimensional travel and the ability to dematerialize. The dark paint was scrapped after the cinematographer pointed out how often the car would be shot at night.

The vehicle designer was poorly credited in the film. Stephen Dane was tapped by director Ivan Reitman to design and oversee the development of Ecto-1 from scratch. He also designed the Proton Pack, Particle Thrower, Trap, Giga meter, Slime Scooper and Slime Blower—all within two weeks of the start of shooting. His name was misspelled (Steven Dane) in the credits and he’s listed only as a “Hardware Consultant.”

Dane’s original hand-drawn drafts are insanely accurate and detailed. You have to see him flip through them in this incredible interview.

Two Miller-Meteors were purchased, but the converted one was primarily used during filming. The primary vehicle was originally a gold ambulance. The secondary vehicle was used mostly for the early pre-modification scenes, where Stantz talks about the laundry list of issues plaguing the car.

Sight of the Ecto-1 during the film’s promotion caused crashes. The original Ecto-1 was driven around New York City shortly after the movie’s release in 1984, with one of the Ghostbusters behind the wheel, in costume. Allegedly, it caused a slew of accidents because other drivers were so taken with the iconic car, they lost control of their own.

The Ecto-1 crapped out on the Brooklyn Bridge while shooting Ghostbusters II. Scenes from the film that show the car backfiring and billowing smoke were not special effects; the car was on its deathbed. It died during a sequence on the Brooklyn Bridge, which caused such a huge traffic jam, the NYPD heavily fined the production. That aforementioned second Miller-Meteor was quickly converted for the remainder of filming, referred to as Ecto-1a.

Ecto-1 was revived following a fan movement. Universal Studios left the original car to rust in a studio backlot, which outraged zealous franchise fans. They petitioned and ultimately bought the car and restored it to near-perfect condition. The sum of their incredible efforts is nothing short of amazing.