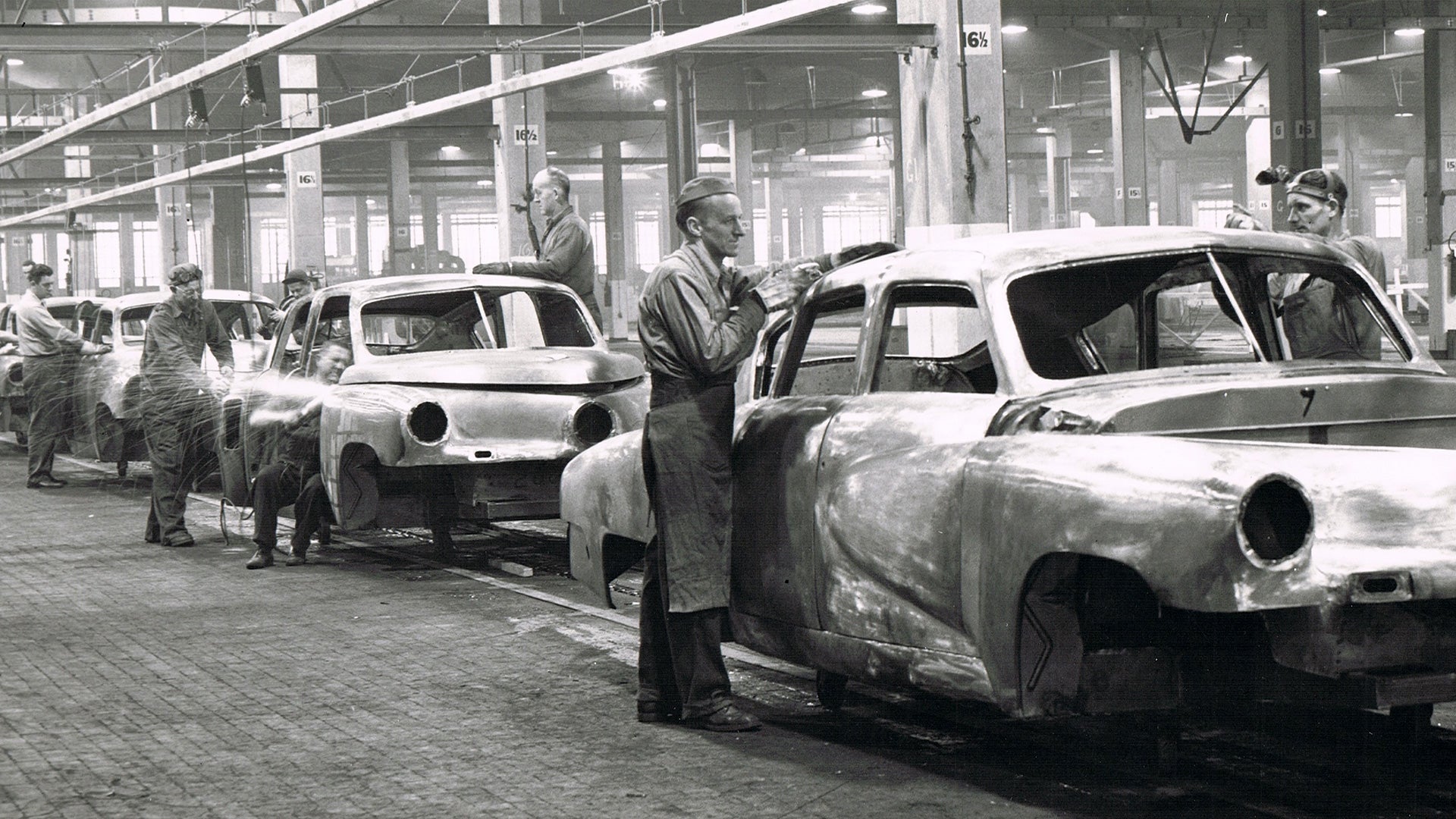 Preston Tucker had a radical idea. In the aftermath of World War II, when domestic automakers were peddling warmed-over versions of the same designs they’d been selling before the conflict, Tucker thought he’d launch an all-new car company. One dedicated to creating a vehicle that would feature advanced technology, life-saving safety enhancements, improved efficiency, new applications of aerodynamics, and a simple driver interface, all motivated by a cutting edge and untested powertrain.

Tucker was a gifted performer and an egomaniac who insulated himself from criticism by surrounding himself with acolytes. He knew how to manipulate the press (though it often bit back). He whipped potential consumers into a frenzy of pre-orders, receiving hundreds of thousands of requests and millions of dollars in deposits, for a car he had yet to design, let alone begin building. He commandeered the biggest factory in the world to build his dream, sized, in part, to match his megalomania.

His car was beset by delays, price increases, and by his own dissembling. He fired friends, claiming they were enemies and traitors, thereby turning them into enemies and traitors. He courted the ire of the Big Three, blaming them for his naïve failings, and crafting intricate (if somewhat credible) conspiracy theories about how they’d quashed him. And the car he created was indeed a transformative break with the past—replete with performance-enhancing yet dysfunctional styling cues—but he was unable to scale production to meet expectations.

A deeply researched and highly approachable new biography written by Steve Lehto (with a forward by Jay Leno), Preston Tucker and His Battle to Build the Car of Tomorrow, describes the mad, madcap, and often maddening efforts Preston Tucker undertook in his attempt to create real and practical change within the American automotive industry. And also, how he ultimately failed. Want to get a sense of just how crazy the process is? Read the exclusive excerpt, below, from the book’s first chapter, check out our slideshow of glorious images, then buy the book via the link above.

Eddie Offutt had been driving all night at 90 mph. It felt slow to him as the stands flashed by his car. Here, on the Indianapolis Motor Speedway, he normally drove much faster. Even so, the rough brick surface of the two‐ and‐a‐half‐mile oval chewed the car’s tires. Offutt sailed around the oval with the pedal almost to the floor, watching the miles add up on the odometer of his “waltz blue” Tucker.

Offutt was in charge of a team testing the revolutionary Tucker ’48 sedan, then the hottest thing in the automotive world. More than 150,000 people had written letters to the car’s manufacturer asking how they could buy one. So many people paid admission to see one displayed in New York City that the venue out-grossed some Broadway plays running nearby.

The car’s namesake, Preston Tucker, had unveiled the car to the world on June 19, 1947. Tucker, a brilliant salesman and showman, was promising a newer, safer, and more reliable car than those the auto giants in Detroit churned out. His rear‐engine, rear‐wheel‐drive automobile featured bet‐ ter traction and more passenger space than its competitors, along with disc brakes and an automatic transmission, long before those became standard in the industry. Its padded dash and sturdy frame would better protect passengers in a collision, and the car would drive more smoothly and cost less than other vehicles on the market. The established car companies had stopped assembling new automobiles in 1942, spending the last few years building tanks and airplanes for America’s forces in World War II. Now, as peacetime production resumed, these companies were struggling to bring fresh new models to the market. Tucker’s bold alternative was raising a stir.

Eddie Offutt lapped the track at 90 mph, worrying little about business problems as he noted how smoothly Tucker #1027 ran. Offutt, Preston Tucker’s lead mechanic, had met his employer at Indianapolis years before, when Tucker had worked with famed race car builder Harry Miller. Now Tucker had sent his team to Indy with a fleet of seven Tucker ’48s to test the cars’ endurance and resolve last‐minute bugs. The cars weren’t in mass production yet, but Tucker had assembled enough to display them around the country and build consumer interest.

As daylight began to break at Indianapolis, Offutt’s drive took a dramatic turn. Just as he entered a curve at high speed, the sedan’s engine stalled. In a fraction of a second, the rear of the car swung out from behind him. As he fought to regain control, the right rear tire blew out. The vehicle’s tires, with a new tubeless design by Goodrich, had seen nothing but heavy driv‐ ing in the previous days as the team had clocked a thousand miles at high speed, virtually nonstop around the speedway, often without even slowing for corners.

Offutt lost control. He skidded onto the grass of the infield and the car turned sideways. Then it flipped. The driver held on as it tumbled over and over again, three times in all. The windshield popped out. Finally, the car landed on its wheels.

Offutt climbed out and surveyed the damage. He had bruised an elbow but suffered no other injuries. Other than the missing windshield, some minor body damage, and the tire that had blown out as he lost control, Offutt saw nothing wrong with the car.

Later, Offutt and the others would realize the accident was the result of a simple mistake made in the early morning darkness. At 4:15 am, Offutt had stopped to refuel the car. A mechanic had reached for the wrong container in the dark and placed aviation fuel in the vehicle, which the Tucker engine was not tuned to run on. For now, Offutt replaced the tire and drove the vehicle off the track.

The Tucker team was conducting the Indianapolis tests in strict secrecy. The Tucker ’48 had been subjected to oddball rumors and gossip, like a persistent story that the car could not drive in reverse. No matter how many times they demonstrated the cars backing up, the story dogged Tucker’s men. Tucker could not afford leaked test results, especially if something went wrong.

Fortunately, the tests were a spectacular success. The team logged thou‐ sands of miles in the Tucker ’48s and found only a few minor problems, all easily resolved. And Offutt’s crash was not caused by the failure of a Tucker part. If anything, the crash underscored Tucker’s assertions about his car’s safety: it had rolled three times after crashing at 90 mph, and the driver had walked away with nothing but scrapes and bruises. The team drove the caravan of Tucker ’48s back to Chicago, satisfied with their results. Only the damaged Offutt car had to be trailered home—because it was missing its windshield.

But not all was well at the Tucker Corporation in Chicago. Even though the American public clamored to buy the cars, and Tucker had raised $20 million from enthusiastic investors, powerful forces in Washington were gunning for him. The Securities and Exchange Commission had announced that it was investigating Tucker, suspecting him of bilking investors with a massive fraud scheme. The latest headlines about Tucker accused him of perpetrating a hoax, suggesting that his cars weren’t real and his factory was a sham.

But everyone who saw the Tucker ’48 sedan believed Tucker had built an amazing car. The vehicle was revolutionary, and Tucker had built it despite vocal critics who said it was impossible. Tucker had not resolved one problem though: the cars were taking too long to get to market. Could Tucker save his business?

Offutt would witness just how serious the disconnect was between the reality and the government’s suspicions in early 1949, when he was summoned to appear before a grand jury and grilled about the Tucker ’48s. The US attorney not only believed the cars were fake but thought Offutt knew it too. Offutt told the attorney about the successful tests at Indianapolis. The attorney then asked him, “How were the cars taken to Indianapolis— trucked down or driven down?”

Offutt said the cars had been driven to Indianapolis from Chicago.

“Are you sure you drove them down?” the attorney pressed, giving Offutt the chance to change his story in case he was lying.

Offutt stuck to his answer, which was the truth. The cars had not been “trucked” down; they had all been driven to Indianapolis under their own power. Offutt offered to let the attorney and the jurors visit the Tucker plant and see the cars. The offer had been made before, many times.

Again they declined the offer.

And so the stage was set for a trial that would ruin an innocent man, Preston Tucker, and doom the corporation building the spectacular Tucker ’48 automobile.