The Charm of BMW’s Slowest Car

Why it’s impossible to drive the BMW 528e like an asshole. 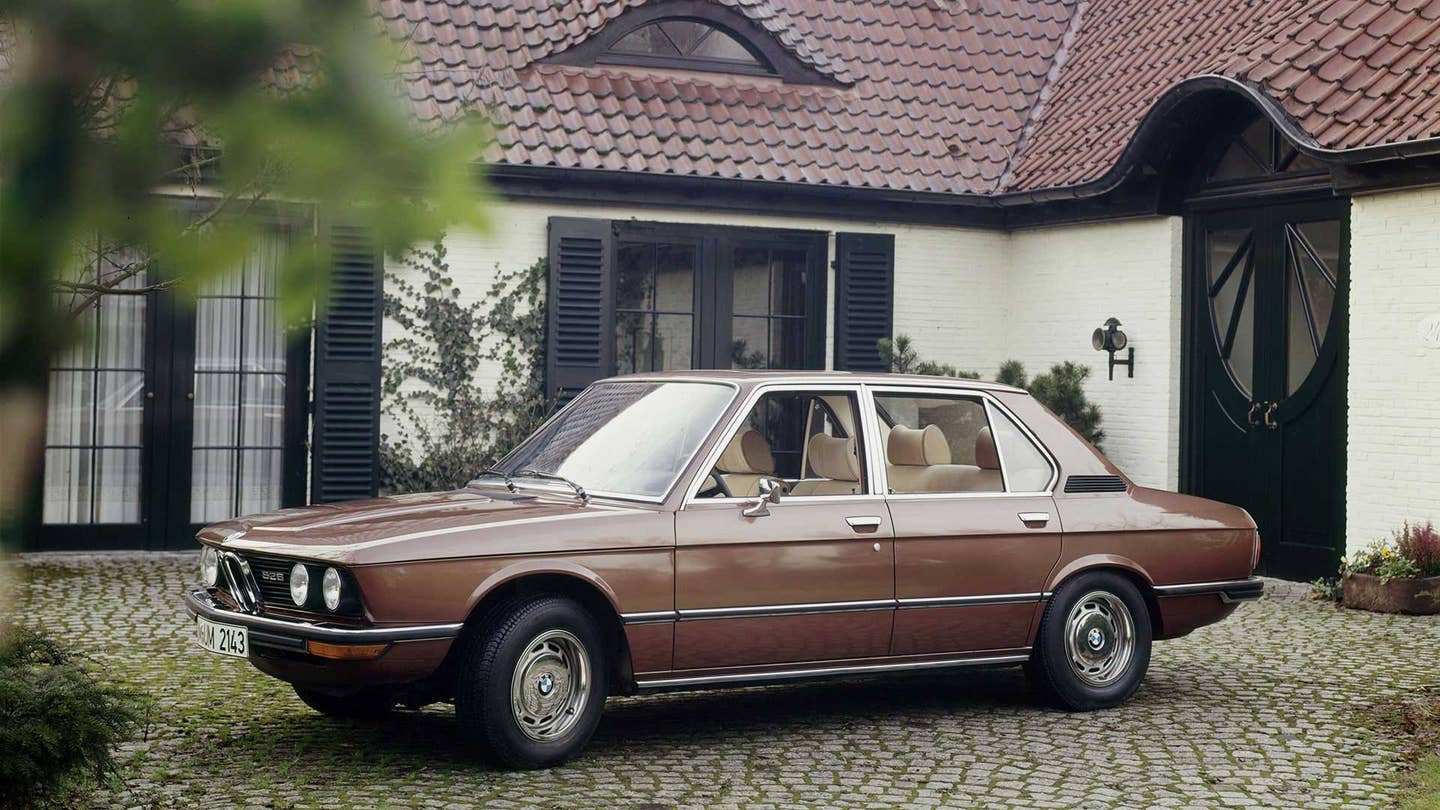 What if there were a car so honest, measured and, yes, slow that it prevented one from ever driving like an asshole? And what if that car, that automotive angel of our better natures, had a blue and white roundel on the hood? Is that dreams? No. That’s the 1982 BMW 528e, a cleansing cure for the contemporary BMW.

Think of BMW’s current cars as automotive lardons. Rich, thick, savory, fat. Their pleasures are quickly accessed and easily consumed. Some, like the 3 Series sedan, are handsome, solid and swift. Others, the X4, X6 and 5 Series GranTurismo, look like the misbegotten offspring of a beluga whale, a Saab 900 and Chris Bangle’s dreams, and are also solid and swift. Turbos pervade the range, making the cars quick in a push-button manner: press for speed, no need to wind the engine up. They insulate and coddle, too. In a fast, quiet cocoon upholstered in Dakota leather, it’s no wonder that many a BMW driver uses “stomp and steer” not as a guide for stopping, but for going.

How lucky that from 1982-1988, BMW produced a light, vinegary slaw whose decades of fermentation leave us today with the perfect palate cleanse. In the face of a receding oil crisis and stricter EPA regulation, BMW took its lusty 3-liter straight-six engine and gave it a neutering. At 2.7 liters and with the tiny cylinder head from the 2-liter 520i, the 528e motor makes 121 horsepower but a robust 171 pound-feet of torque. It is tuned like an American V8 or a diesel lump: torque down low, high inertia and a hilarious 4,200 rpm redline. New, a 528e took 11 seconds to get to 60 mph.

Looks-wise, the 528e was similarly spare. While the faster sedans got low front fascias and BBS wheels, the “e” wears diving-board bumpers and “bottle-cap” alloys, leaving it buck-toothed and pigeon-toed. Combined with sensible lines that originated on the 1972 E12, the 528e is as slow as it looks. Which is perfect, if you have a tendency to drive in a self-important or bombastic way. You need this nerd to slow your roll.

Here’s why a 528e can reform even the rowdiest driver.

1. You have to start slow. In a new BMW, you swing into the seat, punch (punch!) the starter button, slot the transmission doodad into Drive and skid away. In a 528e, with the manual, you’ll need a few minutes. Depress brake and clutch, insert the key (it will probably stick) and turn the engine over. It will heave to life; give her a few to even out. Then ease the car into gear, your foot onto the gas, and go. You cannot storm away from anything. You can trundle.

2. It is near impossible to dart. When caught behind a slow vehicle, a 528e cannot simply thrust past. It takes half a mile, a couple of downshifts and an iron will. Maybe you should let the other drivers on the road dictate your speed, and spend your energy thinking of other things, like wood finches, or whole grains.

3. Driving an 528e means calibrating your tuchas to sense even the slightest feeling of speed. In a contemporary 535i, matting the accelerator for more than a couple seconds yields extralegal velocity. At such doses, the feeling of thrust loses its savor. In a 528e, rather, summoning speed is like summoning the dead; it takes a veritable seance. Rid yourself of passengers and luggage; travel to a flat state; find second gear; and mash the pedal. The revs will build slowly as your sit wide-eyed like a bird-watcher, anticipating the arrival of that power. When it arrives, a smile spreads across your face and you relish the achievement, oblivious of the man flipping your off from the lane over, or the angry teen riding your tail. Nirvana at 62 mph.

4. The shape of a 528e deflates the ego. Amid a culture of M-car swagger, from the newly gilded E30 M3 to the gargantuan, speed-freak X6 M, your car does not rank. The shape is boring. The power is nil. The tires are wee donuts, and the badge, “e,” stands for eta, a Greek “e,” for efficiency. No one will race you, and you will not race.

5. The 528e is solid and well-built, but not safe. At least, not to current standards. It weighs 2,950 lbs. Nothing curbs recklessness like knowing you would surely be on the losing end of a collision with most late-model Honda Civics.

6. The BMW 528e has little worth. Scratch the shiny schwartz finish on a man’s ‘88 M5 and he’ll scream bloody murder, then fillet you like a fish. Dent the chrome on a robberbaron’s 760Li and he’ll have you buried in a salt quarry within the week. But the 528e? It’s a little workhorse, better for the blemishes.

As our brains are wired to crave and consume unspeakable amounts of fat and sugar, rare commodities to Hominids in which we now proverbially swim, the petrolhead constitution requires regular speed-induced adrenaline washing. As recently as the Nineties, speed was a scarce good, living at the top of the redlines, but now, it’s available everywhere by automated delivery. We have launch-controlled ourselves into oblivion. Horsepower is our cheeseburger, turbochargers our chocolate shake.

Take a break. Find a 528e; for five grand apiece, maybe you should buy one. Toodle around in your slow German box, your dollop of clarifying sauerkraut and realize that speed is for the young, the restless and macho.

None serves the ascetic aesthetic better than the 528e. Considering that Thanksgiving was last week, we could all use a little less.