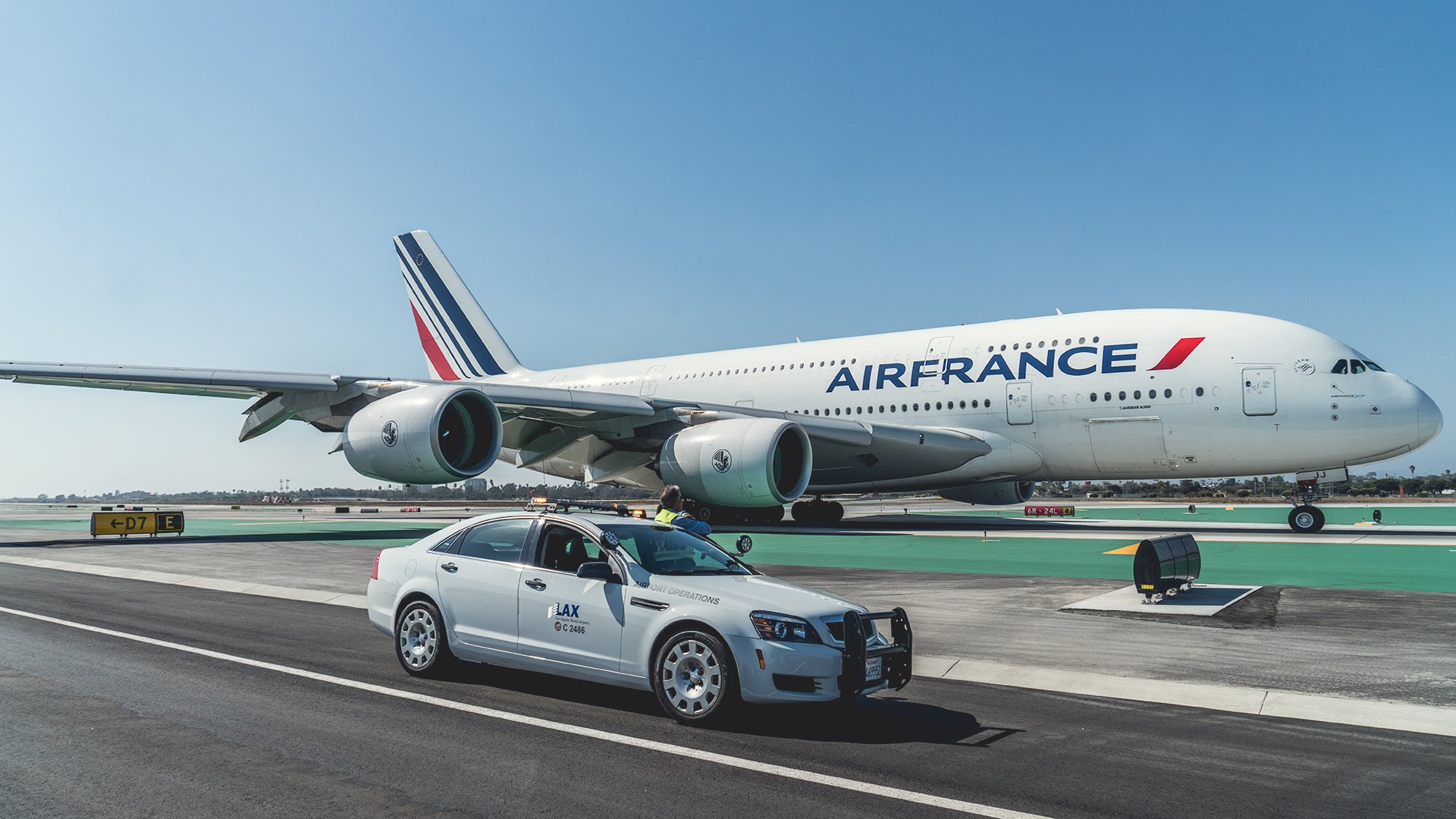 There’s an indecipherable chatter over the radios as we pass through the first security gate. At a prison, it’d be called a sallyport. One tall chain-link gate closes behind the Chevrolet, trapping us. A guard suspiciously eyes my driver’s license while the radios broadcast the goings-on around us. The sound of takeoffs, landings, gate assignments, a medical emergency on an Alitalia flight—all crackle over the speakers while we wait. Then, a monster of a steel wall opens in front of us and we’re rolling out across the hot summer tarmac of Los Angeles International Airport, sharing right-of-way with the largest airplanes in the world.

Behind the wheel of the Chevrolet Caprice is Alex Margheritis, Superintendent Airfield Operations. It’s immediately apparent that he’s a veteran airport man, navigating the Chevy through the bustling west side of the U-shaped terminal complex. United Airlines is on this side of the airport; Delta and American, too. At 3:00 PM on a weekday, it’s a warren made up of moving parts: 737’s pushing off the gate and taxiing; comparatively tiny regional jets whisking briskly through larger spaces; uncountable baggage carts; fuel trucks and tugs filtering through any gaps that are left. Everything smells of burnt jet fuel. With Margheritis’ ear for the radio, or seen from above, the tight choreography would be apparent. To an untrained eye, it’s an exciting kind of chaos.

Even at an airport humming with the activity of jumbo jets, the Airbus A380 stands out as the biggest of the lot. An island in the sky, 262-feet from wingtip to wingtip, 239 feet from nose to tail. Fly on an A380, and it seems big. Walk around it next to the giant landing gear, or underneath it without ducking your head, and it seems impossible.

LAX was built for a different era in aviation. Its first hangar dates to 1929, when the Ford Tri-motor was rolling off assembly lines, and the terminal layout around the iconic Theme Building is distinctly mid-century. It was never built for an airplane with an acre's worth of footprint. It’s that confluence of extraordinary size and established infrastructure that has Margheritis driving under the wingtip of the big Airbus.

Even with nose- and tail-mounted cameras, the A380 is occasionally prone to putting the distant ends of those wings where they don’t belong. In 2011, an Air France flight with 520 people aboard clipped the tail of a Comair regional jet, spinning the smaller plane violently and giving more than 60 passengers a startling ride. Just months later, an Airbus-liveried A380 buried its wingtip deep in the side of a building while taxiing after a performance at the Paris Airshow.

To mitigate the risk of lost wingtips, or worse, LAX sends every A380 to the runway with an escort. A wingman, of sorts. This duty, among other airfield jobs, falls to Margheritis, and airport operations. And they get very busy around 4:00 PM.

A row of A380’s is parked at the bottom of the U-shaped terminal complex, the Tom Bradley International Terminal, their monster tails taller than the airport buildings themselves. Lufthansa, British Airways, Singapore. An Air France flight for Paris is the first to shake loose from two stories of aircraft gates, and the controlled chaos around the gate comes to a respectful halt as the behemoth rolls back onto the ramp. Margheritis pulls the Chevy close to the terminal and the A380, for a moment, is aimed right at us.

The charm of the arrangement hasn’t worn off for Margheritis. He’s a private pilot and a mechanic—a proper enthusiast. He spends his weekends flying out of little local airports. Most of us have a job in mind for a rainy day, a fantasy parachute we imagine when working life is just too overwhelming. Margheritis’ fantasy job would be right back at the airport. As you’d expect, he can rattle off detail after detail of every airplane at the airport—their wingspan, the load they put on the tarmac. But he seems especially taken with the Airbus A380.

Margheritis parks on the side of the taxiway with a clear view down the apron, past the wingtip. He’ll be back in the car by the time it passes, picking it up at the end of the terminal and driving just ahead of the wing as Air France Flight 65 makes its way down the long row of tails. But for now, he just watches the A380 spin up it’s engines. Radio in hand, just in case.

The A380 starts to roll, almost imperceptibly. The pilots just need to follow the lines now, Margheritis tells me, as we edge up the runway. There’s room, but not much. But then, it’s routine now. LAX had to adapt to the largest airliner in the world, moving lamp posts and signs and setting up new procedures, like the Airport Operations escort car. Once it did, though, the process became routine, like every process.

As the big Airbus pulls alongside, it fills the windows of the car, then blocks out the sun. It's like having a building roll up next to you. Margheritis pulls ahead and parks at the intersection of an access road, momentarily blocking the traffic of caterers and service vans as the big airplane lumbers onto the taxiway. We follow it the length of the taxiway, and then the Caprice shimmies in the roiling turbulence of its thrust as the plane turns away from us, onto the runway. We watch from alongside as the pilot of the A380 spins up its four big engines, starting its takeoff roll.

Air France Flight 65 takes off. The radio broadcasts the pilot’s quick check-in with the tower as his airplane punches through the clouds, ripping an airplane-shaped hole in them. Wing vortices swirl. Margheritis stares after the thing. Even if something has become routine, it’s no less impressive.