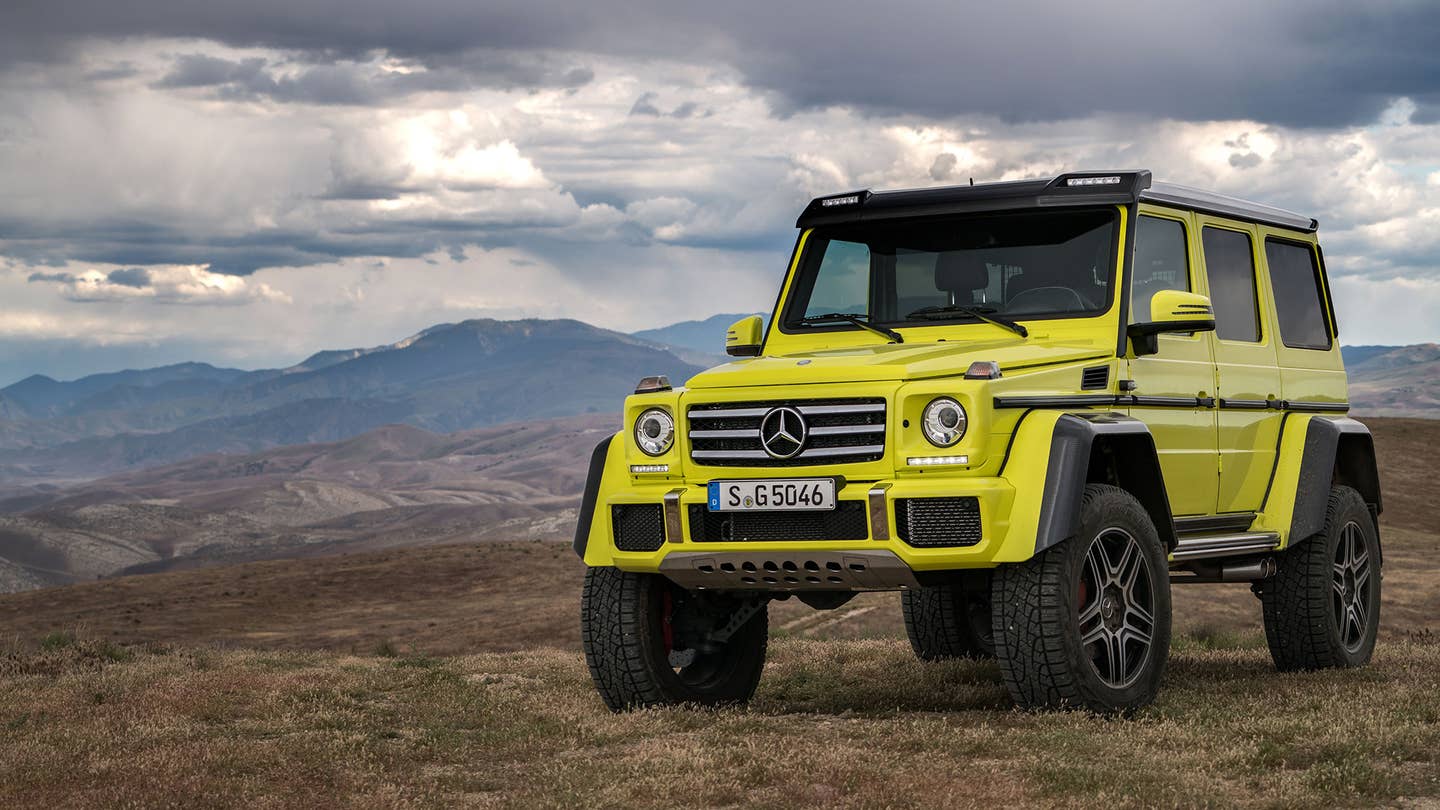 Hills like the knobby spine of an old dog rise up out of the grasslands. If you didn’t know you were threading your way across the most dangerous fault line in America, you’d pass them right by. There’s no precipitous crack to plunge into. No sign. The spooky, almost creased straightness of the earth driven up by Pacific and North American Plates meeting? It looks like a long squat hill, just another thing to hike in one of California’s last unspoiled grasslands. Just the kind of place you want to poke around in a thundering monster like the Mercedes-Benz G500 4x4 Squared.

The warning comes too little and too late. “The springs on the San Andreas system have been wound very, very tight.” says Thomas Jordan, director of the Southern California Earthquake Center to a whole conference of earthquake scientists and predictors. “...the southern San Andreas fault, in particular, looks like it’s locked, loaded and ready to go.” If we’d known earlier, Thomas, we wouldn’t have hucked 416-horsepower and 450 lb-ft of earth-shearing ultra luxury straight up the exposed middle of the thing.

Here in California we call it Earthquake Weather. Heat with weight and oppression. Foreboding. The Plain is like that. Make the turnoff and you’ll get that eyes on your back feeling. The low thrum of an amplifier left on. The tension before a fight. The adolescent nervousness that you’ve done something wrong. It’s like that. Even after a dozen visits. The Carrizo Plain is just unsettling.

Even in the embrace of profoundly adjustable quilted seats and the vault-like doors of the G-Wagen, that feeling settles in. So does the weather. Puffy clouds turn dark, thunderstorms. The soil here is fine, it comes up in waves of dust behind the Merc. When wet it’s as slick and as treacherous as any Alabama red mud. In dry conditions much of the Carrizo Plain can be traversed by a sedan. With even a bit of water? Well, that 1000mm fording clearance, the portal axles, the foot and a half of air between the earth any hard parts? It all might yet come in handy.

The G500 rocks back and forth against its adjustable suspension every time you stop. It’s a little nausea inducing around Los Angeles. As is the $20,000 optional safety-yellow color. It drives like a proper off-roader. Stiff, yet just a little ponderous. It’s a familiar experience. The Rally Fighter, racing trucks. They’re similar. What isn’t is the silence of the chassis and suspension doing their work. Anything this capable off-road would typically creak or groan when subjected to so much chassis flexing. Not a peep from the Merc.

Up every canyon, down every rift, the 4.0-liter engine does its burbling. The powerplant might be the most subtle part of the 4x4 Squared. Under all the paint and carbon and posturing it's a tidy little thing. Not one of Mercedes handbuilt and consecrated AMG mills, but a pleasantly dense brute with clear family ties to the Mercedes GT-S. Twin turbos nestle between the V made by eight cylinders and put a mute on the trumpets of side pipes. The pipes flash in the sun, two gleaming chrome tips per-side.

Out of the canyons, onto the grassland. So subtle and muted a palate of color shouldn’t overwhelm the fluorescence of the G-Wagen, but it does. With size.

If you take pleasure in austerity, you can find it here, fifty miles of it. Treacherous, sticky salt flat. Wildflowers that flash vividly in February, then die off instantly into shades of muted browns. There are too many birds of prey to count and a wealth of rattlesnakes. Everything on the plain is killing or being killed. It’s savage, like the serengeti. But then, the serengeti has never threatened to shake a city flat.

The eastern edge of the rift butts up against the Temblor Range. The Temblors butt up against oil country. It’s easy to float in and out of the fault. To flick its nose and kick up its dust. On every ridge there’s a view worth stopping for. At the bottom of every swell, the knowledge that you’re surfing between continents. As befitting a 200-something-thousand dollar offroader, the Mercedes performed impeccably, no matter which tectonic plate it was treading over. On that count at least, we went looking for a fault and found none.