The 2017 Grand Cherokee SRT is intriguing as it’s truly in a class of its own. Yes, there are other performance-oriented, mid-size SUVs on the market but they’re all either German or British with price tags over $100k. But does anyone truly consider the Porsche Cayenne Turbo S a Grand Cherokee SRT competitor?

For 2017, FCA changed up the Grand Cherokee SRT’s front fascia, giving it more of an aggressive and aerodynamic appeal. It’s a little more Charger and a little less Jeep. Outside of the facelift, the rest of the robust exterior remains the same and that’s good with me as I’m in love with the Viper-esque hood, wide shoulders and aggressive stance. Even with all those styling cues, the Grand Cherokee SRT is still somewhat of a sleeper. Most people on the road are oblivious to its power and capabilities. However, an average car guy should be able to notice the Brembos and the stance and assume it’s not a soccer mom’s Grand Cherokee. To me, this can be both positive and negative. I love the idea of a sleeper because it keeps you off the radar but at the same time, at almost $80k, I kind of want people to know about it.

Inside the Grand Cherokee SRT are two heavily-bolstered bucket seats that hold you tight whether you’re cruising on the highway or whipping it around corners. All the seats are wrapped in a sepia leather with perforated suede and the front seats adorn the SRT logo. The sepia tan hue flows to the door panels and there are strips of carbon fiber to remind you that you’re in a race truck. The 8.4” Uconnect system is one of my favorites as the graphics are beautiful, the layout is simple and the touchscreen is responsive. The SRT High Performance Harman Kardon audio system is also pretty impressive with its 825-watt amplifier and 19 speakers. The tester also came equipped with the rear seat entertainment package that includes two flip-up LCD inch monitors connected to a Blu-Ray / DVD player located in the center console. HDMI inputs are also present to connect your devices.

The driving experience behind the wheel of the 2017 Grand Cherokee SRT can be enthralling, comfortable or a combination of both. The 6.4-liter Hemi under the hood boasts 475-hp and 470 lb-ft and that’s all you’ll ever need. Mated to the Quadra-Trac 4WD system and hunkered down with active dampening suspension, you never have traction problems and the Grand Cherokee always seems to get the power down to the pavement properly. The SRT isn’t necessarily scary fast like the upcoming Trackhawk version will probably be, but it’s still sneaky fast. Due to how well the suspension is dialed in, the power of the engine and undoubtedly a boat load of sound deadening material, it’s quite easy to get into the triple digits on the highway without even noticing.

All of this power and elegance comes with a price, one almost so high that it’s difficult to justify paying with those four letters (J-E-E-P) on the hood. Priced at a little under $80,000 with all the options, the Grand Cherokee SRT is in a bit of a no man’s land as there isn’t anything else like it out there. However, you could knock down the final price considerably by de-selecting a few options on this vehicle. The rear seat entertainment ($1995), dual-pane panoramic sunroof ($2095) and trailer tow group ($995) could easily be deleted and that’s five grand right there. The Grand Cherokee is not luxurious enough to necessarily compete with Range Rover, BMW or Mercedes but that’s not really a fair comparison anyway because they couldn’t be more different from each other.  Not to mention, the Jeep Grand Cherokee SRT is about half the price of those foreign competitors. Yet, you could make a case that the Grand Cherokee SRT performs just as well as its expensive counterparts. 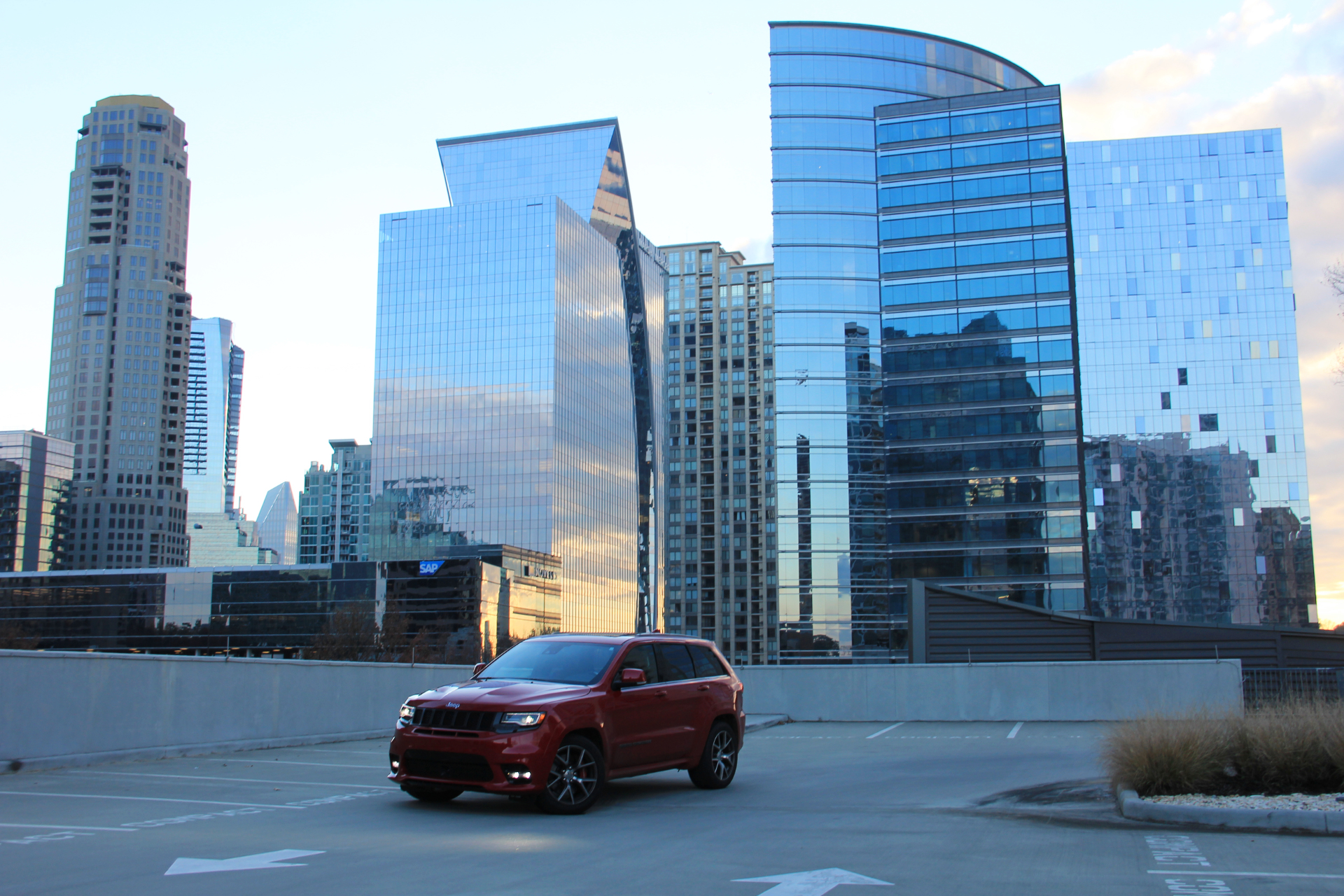