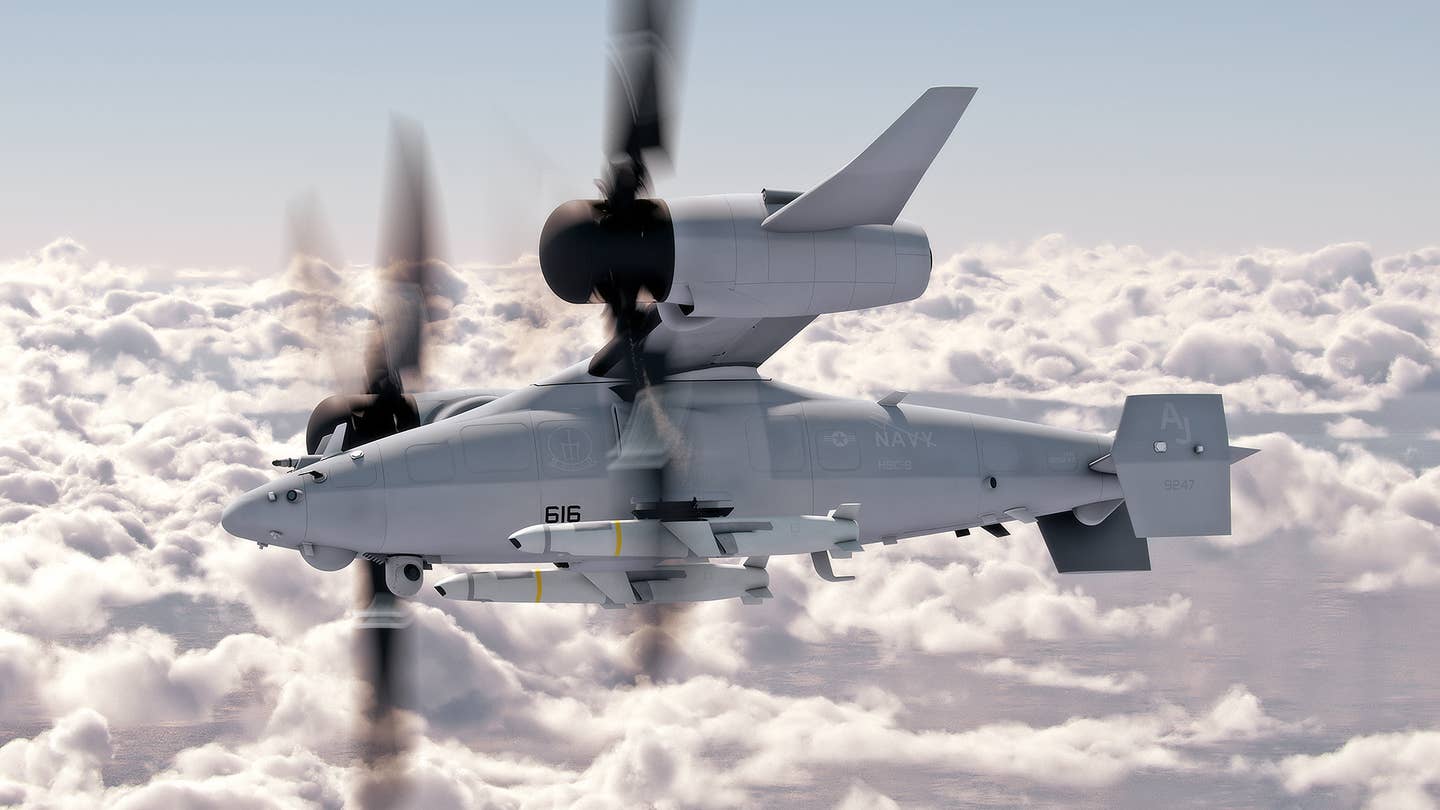 Bell has resurrected the unmanned V-247 Vigilant designed for the Marine Corps and scaled it down for use as a strike and surveillance aircraft aboard Navy ships, where the autonomous tiltrotor can fit in the same space as an MH-60R and perform any of the manned helicopter’s missions.

“That was a large aircraft that could do a whole lot of missions,” Worden said of MUX. “A lot of them were very difficult to do, but we sized the 247 to meet those missions. It had a different set of missions, and we reevaluated how big the aircraft was, and were able to right-size the aircraft for the Navy. What that did is made the compatibility with the cruiser, the destroyers, that much better, by getting the size down, so now it's very comparable to an aircraft that's currently embarked on those service combatants, the 60 Romeo.”

Originally designed with a maximum gross weight of over 30,000 pounds, the 247 was downsized to about 28,000 pounds to satisfy Navy requirements, Worden said. An MH-60R, by comparison, has a maximum gross weight of 23,500 pounds. Reducing the 247’s weight was done primarily by shrinking the fuselage by eliminating excess fuel capacity required by the Marine-specific MUX program.

“That is a scalable area,” Worden said. “There is structure in there that can be scaled up and down depending upon what the Navy requirements are. So there's still some agility that we have in the design of the aircraft. … It's important to note that the aircraft itself, the wing structure, the nacelles, the blades, and things like that, were resized, but the wingspan really didn't change. To optimize the endurance of the aircraft, to get the most endurance out of it that we could, we wanted to maintain the length of the wing. We want to get as much glide as we can.”

One of the driving factors in the V-247’s design was fitting it inside the hangar of an Arleigh Burke class destroyer, which would ensure it could deploy on any of the Navy’s helicopter-capable vessels. As designed, the 247 could provide massive capability enhancements across a wide spectrum of operations down to a Frigate-sized ship. Bell strove to retain the basic wing size and foldability of the MUX-sized Vigilant, Worden said.

“The wing structure, which is where a lot of the magic happens, and the nacelles, a lot of that was was relatively unchanged from the MUX because that really was the secret to getting the long endurance and the speed range of the aircraft and the wing is sized to the size of a DDG hangar.”

MUX initially was designed to fit the same physical footprint as a UH-1Y Venom helicopter and provide the Marines with a "Group 5" unmanned aircraft — drones with a maximum takeoff weight of greater than 1,320 pounds that can fly at altitudes of 18,000 feet or higher. Congress was not enthusiastic about the program and cut most of the funding for MUX from the Marine Corps budget in fiscal year 2020.

The Marines wanted MUX to have a minimum internal payload capacity of 3,000 pounds, the ability to carry between 3,000 to 9,000 pounds of weapons or other stores externally, a cruising speed between 230 and 345 miles per hour, an unrefueled combat radius of 350 to 700 miles, and the ability to refuel in flight.

Vigilant’s long-range cruise is now listed as 240 knots with a maximum continuous cruising speed of 300 knots. Its redesigned internal mission payload is 2,000 pounds and has a 9,000-pound slingload capacity.

MUX was aimed at providing the Marine Expeditionary Unit (MEU) its own airborne early warning capability, air reconnaissance, electronic warfare, communications relay, offensive air support, scout and aerial escort, and cargo utility all with an unmanned aircraft that could take off and land vertically from the deck of a ship or a small, remote landing zone.

The Navy is still considering options for its maritime strike systems under an analysis of alternatives that will eventually solidify the service’s requirements for replacing both the MH-60R and the MQ-8C Fire Scout. In the request for information released last year, the Navy listed FVL-MS missions as follows:

To accomplish the naval strike mission, the 247 will have several armament options mounted to the cheeks of the fuselage, stowed in an internal weapons bay, or hung from the wings on pylons. The MUX version came with conformal belly pods that could carry electronic warfare equipment or AIM-9X Sidewinder air-to-air missiles. Bell has previously shown a model of V-247 an anti-submarine warfare configuration with a side-mounted sonobuoy launcher.

As Bell waits on the Navy to finish its AoA, investment in the design and manufacturing of V-247 and other advanced tiltrotor capabilities has continued, Worden said. During MUX, the company built a half-span model, spars, and fuel cells and spent several months validating the designs’ aerodynamics in a wind tunnel.

“A lot of that we were able to leverage moving forward with the maritime strike,” Worden said. “If anything, because the fuselage is slendered down quite a bit, actually the performance is up probably because our drag is down.”

Carl Forsling, Bell’s senior manager of advanced military programs sales and strategy said problems with arming tiltrotors with forward-firing munitions are partially solved by the 247’s autonomous flight controls. Experiments beginning in 2014 showed that a V-22 Osprey could be equipped with belly- or cheek-mounted ordinance, he said. Aircraft and weapons technology has advanced since then to allow capabilities like missiles being fired off-axis, eliminating the need for a tiltrotor to transition out of airplane mode to fire wing-mounted munitions in some scenarios. Autonomous flight will also allow the Vigilant to more efficiently transition from forward flight to a partial hover, reducing the time it is vulnerable to enemy air defenses.

“If the computer knows what the target is, knows what the condition of the aircraft needs to be when it gets to that target, then we'll find the most efficient way to get to that point, then transition the rotor system between forward flight and a firing condition is an extremely fast transition,” Forsling said. “We're talking seconds to be able to do the transition, fire the weapon system and then and then go back to the forward flight mode.”

Both the Navy and Marine Corps are fixated on establishing new and more-advanced autonomous shipboard unmanned capability. Bell’s V-280 Valor, which demonstrated a level of autonomous flight late in its development, and Sikorsky’s Defiant X compound coaxial helicopter are potential options for a manned version of FVL-MS, as well. The War Zone will stay on top of the Navy’s specific FVL requirements as they are finalized and made public.