Ukrainian Battle Buggies Are Out To Kill Russian Tanks

Little all-terrain buggies that are heavily armed offer a David-and-Goliath conundrum to the Russian military in Ukraine. 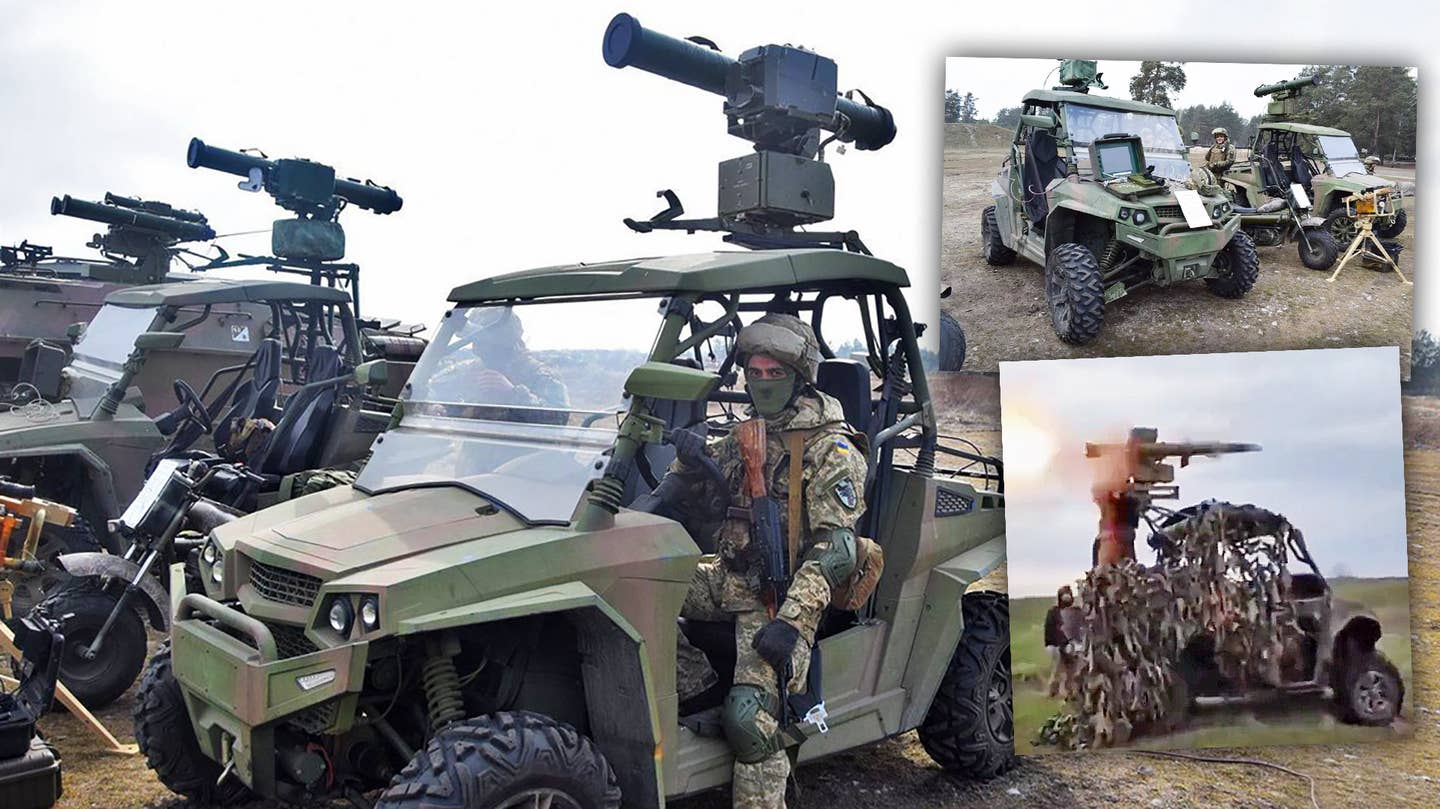 Ukrainian forces are using buggy-type vehicles sporting roof-mounted Stugna-P anti-tank guided missile (ATGM) systems in their ongoing fight against Russian armor. Mounted on trucks, fired from the ground, or launched from the shoulder, ATGMs have become an iconic weapon in this war, though there are many types being deployed against Russian armor.

Ukraine has domestic ATGM production of missiles, like the Stugna-P, but has also made extensive use of imported variants. The buggies in question have shown up several times on social media, as far back as 2019, before the current Russian offensive, sometimes topped with weapons and other times not.

Several photos of the all-terrain two-seater vehicles made the rounds on social media earlier this week. Likely a Polaris Ranger, MRZR Alpha, or some vehicle of equivalent size, the buggies are relatively inexpensive transports for small units that pack a serious punch with the inclusion of the Stugna-P. The missiles are made by Ukraine’s own State Kyiv Design Bureau Luch.

The basic Ranger UTV only has 32 horsepower, but is capable of pulling 1,500 pounds and has a 10-inch ground clearance. U.S. military personnel and civilians stationed overseas can pick up a Polaris Ranger SP with a larger 44-horsepower engine through the Army and Air Force Exchange Service for just under $12,000.

Armed with Ukrainian-made Stugna-P antitank system, the small buggies are a swift, potent weapon in rough terrain. The missiles are capable of engaging both ground vehicles and even, under some circumstances, low-flying slow aircraft, including attack helicopters. You can read all about one such engagement and all about the Stugna-P in this recent article of ours.

The Stugna-P, also called the Skif, is “designed to destroy manpower and stationary and mobile modern armored targets with combined, carried or monolithic armor including ERA (explosive reactive armor) and also pinpoint targets like weapon emplacements, lightly armored objects and hovered helicopters at any time of day or night,” Luch says in the description of the weapon on its website.

ATGMs built domestically and donated by European nations and the U.S. have become iconic in this current conflict and wreaked havoc on Russian tanks so far in the seven-week war. U.S.-made Javelin missiles have become sainted, at least in popular culture, for their role in destroying Russian tanks and armored vehicles, but there are concerns over whether production can keep up with demand. Some of the missile systems can be seen outfitted with thermal sights that allow the operator to see enemy vehicles at night or when hidden.

The Stugna-P missiles can be guided manually through a remote terminal or in semi-automatic command to line of sight (SACLOS) setup where the missile is directed via a laser beam aimed at the intended target. The missiles can carry different warheads, including tandem types designed to bust through explosive reactive armor, as well as high-explosive-fragmentation and thermobaric payloads.

Usually fired from a tripod on the ground, the Stugna-P system requires a crew of two to four troops. It also can be fired and operated remotely from up to 50 meters (164 feet) via the television surveillance and aiming system, which can be seen in some of the photos of the dune buggy-mounted systems.

Ukrainian forces have gotten creative with these guided munitions, using them to explosive effect against both Russian armor and aircraft. Videos of the targeting screens used to fire and monitor the weapons in flight are an almost ubiquitous presence in online posts coming out of the war.

It is unclear from the photographs posted to Twitter what model UTV the vehicles are, although there seems to be a variety. They have been painted a dark green camouflage. A video of another buggy firing a Soviet-designed 9M111 wire-guided missile shows the vehicle decked out in camouflaged netting.

Similar dune buggy-type vehicles appeared in Ukraine in 2021, when one was shown carrying a roof-mounted RK-3 Corsar ATGM, another domestically developed type. Another vehicle, also likely a Polaris Ranger, showed up in 2019 with a 9M113 ATGM, another Soviet-designed type, upgraded with an Archer TSA-9 thermal scope.

Many forces use buggy vehicles these days. U.S. special operations forces use a similar, if larger and more expensive, dune buggy in the Polaris Dagor A1 ultra-light combat vehicle. Special Operations Command (SOCOM) also operates the Polaris MRZR Alpha, which Polaris is now building under a $109 million contract awarded in 2020. MRZRs, in particular, have been widely used in many war zones, including in an ATGM shooter role. The battle of Mosul saw special operations troops doing exactly that, which you can read about here.

The use of buggies in the ATGM platform role goes remarkably far back. Just check out this image of U.S. Army soldiers riding in TOW missile and machine gun-equipped buggies in the early 1980s:

Ukrainian fighters are also putting other buggies configurations to use, like this Tomcar buggy that was filmed accompanying armored vehicles from the Azov Regiment:

Scrappy Ukrainian troops have made do with all sorts of vehicles and weapons in their struggle against Russia. In a truly David-versus-Goliath turn of events, the Ukrainians have fielded these small, inexpensive UTVs against some of the most feared armored vehicles on the planet. But it really isn't all that surprising that combining a small, highly agile, and reliable buggy with an ATGM, paired with hit-and-run tactics, could be a really effective tool against Russia's armored leviathan.