Russian and Ukrainian artillery will play a much more decisive role in the battle for Eastern Ukraine. 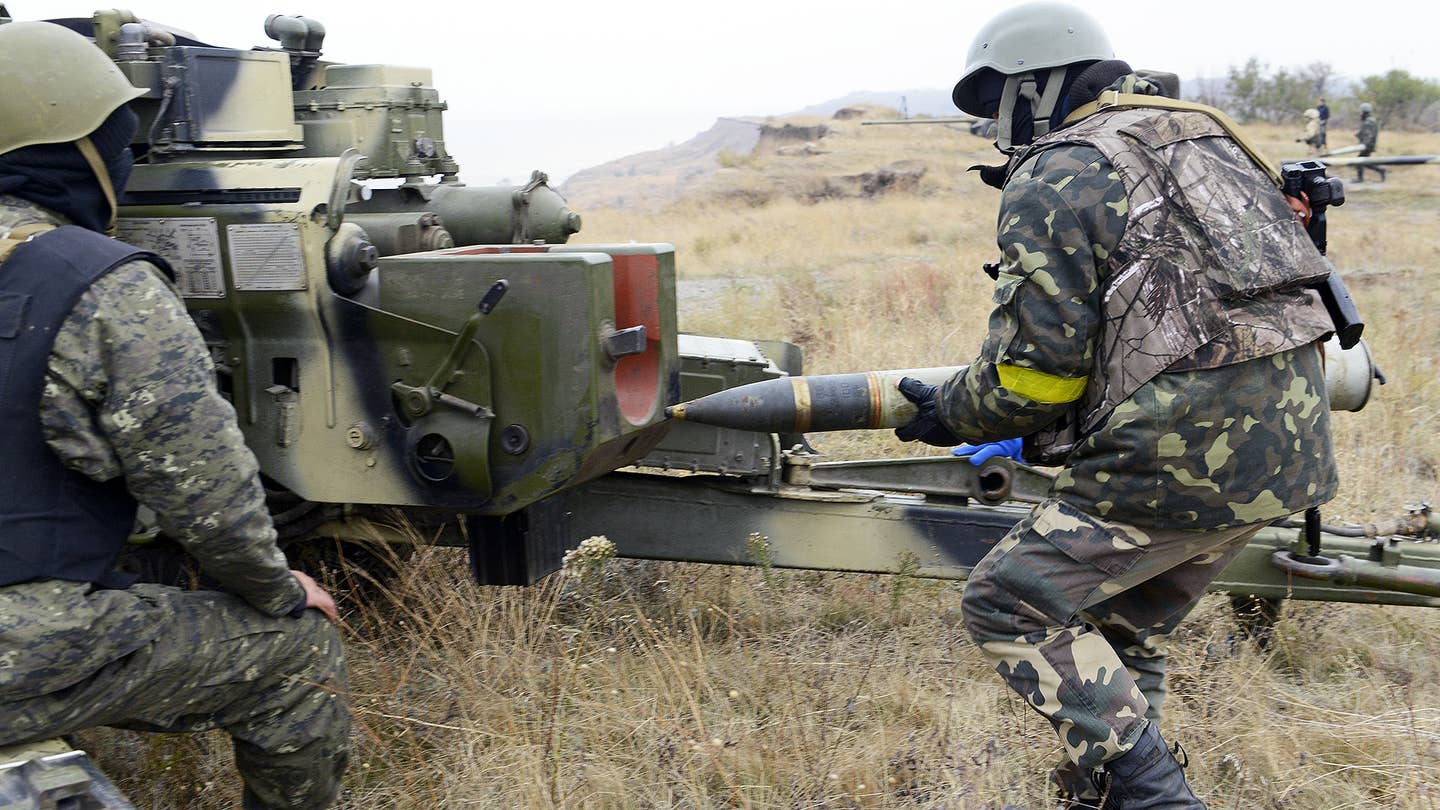 As Russia begins its push to capture a wider swath of the Donbas, the ability to mass and continue to supply its artillery and other long-range fires capabilities will play a huge role in the success of its latest campaign.

Indiscriminate massed fires, meant to kill, confuse, soften and destabilize an enemy ahead of an advance, has long been a key tenant of Soviet and Russian military doctrine. It was as true in World War II (in much of the same territory) as it is today.

"Anytime you fire any sort of projectile, you do want to inflict casualties on your enemy," Connor Crehan, a former Army artillery captain told The War Zone. "But I do think there are a lot of benefits to using artillery besides just trying to inflict pain on individual humans. You can destroy equipment. You can use it to destroy fighting positions. And there is the overall psychological impact you can have on your enemy if you can mass fires. It will really play a lot of head games with your enemy."

You can read more about the kinds of Russian artillery systems Ukraine will have to contend with here.

A senior U.S. defense official Tuesday morning could not offer The War Zone specifics on the number of long-range fires pieces Russia has amassed in its latest push. But, speaking on condition of anonymity to discuss sensitive issues, the official told The War Zone that Russia has “more than 80%” of its artillery alone “still available to them.”

It’s one thing to have the tubes, but feeding them, especially at a rate required to soften an enemy ahead of a push across a large swath of wide-open spaces, is something else altogether. The failed initial phase of Russia’s all-out invasion, in which its ground troops were sent in without the proper supplies or logistical tail is an example of how badly things can go even when you have superior firepower.

The Pentagon is seeing Russian ground movements “southwest of Donetsk and south of Izyum,” the senior U.S. defense official told reporters Tuesday morning. “These are actual ground offensives and they are being supported by some long-range fires, mostly artillery, which is right out of the Russian doctrine.”

In the early phase of the war, parts of Russia’s now-notorious 40-mile-long convoy getting ripped to shreds became symbolic of its planning and logistical failures that eventually resulted in an all-out-retreat.

But this time around, Ukraine will face greater challenges in the Donbas, where Russia has dug in over eight years of war in an area abutting its homeland with, in some cases, shorter and easier to secure supply lines.

Russia, said the senior U.S. defense official, “will have a shorter tooth-to-tail ratio, if you will, but it doesn't mean that they have overcome all their logistics and sustainment problems.”

Still, the official said, “we have seen them try to learn from the mistakes they made. Clearly, when I talk about shaping operations and the fact that they're moving in enabling capabilities even before they started limited offenses, it shows you that they're trying to learn from their mistakes and they will have shorter lines to deal with.”

In a Twitter thread, Mark Hertling, who retired in 2013 as an Army lieutenant general in charge of Army forces in Europe, noted that Russian artillery has a range upwards of 50 miles.

"RU artillery can fire ranges up to about 30 miles (if they use rocket assisted projectiles, or RAP) to 22-50 miles (like the Uragan multiple launched rocket systems)," he tweeted. Russia's largest rockets can reach up to the aforementioned 50 miles.

“The only way to stop: find them (through counter-fire radar or overhead drones), then fire at them,” he noted. “Ukraine also has artillery - tubed and rockets. Just not as much as the Russians.”

Ukraine, he added, also has AN/TPQ-36 counter-fire radars to "find" Russian artillery locations. And Ukraine “has proven themselves very competent in connecting intel to targeting.”

The U.S. recently sent Ukraine 10 additional AN/TPQ-36 systems as part of a recent $800 million aid package. You can read more about that here. The Ukrainian Army has been operating the AN/TPQ-36 for seven years in very limited numbers, but this has allowed them to become proficient in using it with deadly effect.

Meanwhile, Hertling said, “Russian artillery prep can last hours, days, or weeks (depending on the amount of ammo).”

Russia will likely "stagger" those barrages “in different areas along the front line of the Donbas, so UA must be prepared for RU ground force breakthrough at many points along the front.”

Adding to the challenges for Ukraine is the attrition of its air defense systems, combined with the distance of operations and greater density of Russian air defenses in Donbas, according to RUSI.

“As a result of these factors, the Ukrainian Air Force will have much less ability to influence the course of the ground war in Donbas over the coming weeks than it had around Kyiv or in the southwest around Mykolaiv,” RUSI reported.

“Airstrikes on Russian troop movements or frontline positions in the east will carry very high risk, and so are likely to be rare. Furthermore, the distances to the Donbas frontlines from relatively safe airstrips in the central and western parts of Ukraine will stretch the already short range of the Ukrainian Mig-29 fighters.”

It isn't clear exactly how much influence the Ukrainian Air Force has had on the ground war past the opening days of the conflict. At best it is limited.

You can read a Ukrainian MiG-29 pilot's account of the air war here.

But Ukraine is not without its ability to endure and defend against Russia’s long-range fires, the senior U.S. defense official told The War Zone.

“The Ukrainians also have a lot of their available combat power still accessible and still in the fight,” the official said. “And it's important to remember that they are getting replenished every single day with a variety of systems and weapons and that that flow is going to continue.”

While Ukraine is “certainly facing a numerically superior Russian force, that doesn't mean that they don't have advantages of their own, or the ability to actively defend themselves. You don't have to look any further than what they were able to do around Kyiv to see how capable they can be, even if they are outnumbered.”

The official added that the U.S. will “continue to get them the kinds of systems that they need to continue to defend themselves and defend their territory in the Donbas.”

And while Russia outguns Ukraine, has learned some lessons, and has a far deeper supply of ammunition, the official scoffed at any sense of a foregone conclusion of Russian victory.

“People speak about this as if it's inevitable,” the official said. “That Mariupol will fall. It's inevitable that Donbas will be taken by the Russians. We don't see it that way. And we're doing everything we can to make sure that it's not inevitable.”

Though the proximity to Russia makes supplying its Donbas attack easier, “it's also an area that the Ukrainians know well, “ said the officials.

“It’s their country and they've been fighting over this area for eight years,” the official said. “So they know the terrain. They know they have good interior lines of their own, and they're using them and we know that materiel is still getting to them every single day, even as they refocus their own defensive priorities on the Donbas and they still have good interior lines of communication and a strong ability to replenish their own stocks in their own forces.”

It is too early to say how successful Russia will be in this phase of the war.

“You've heard the chairman talk about the potential for this to become a prolonged fight,” the senior U.S. defense official said of concerns raised by Army Gen. Mark Milley, chairman of the Joint Chiefs of Staff. “I don't know how long it could go. But certainly, there's a real possibility that this could go on for a while because both sides can be dug in fairly well.”

Such has been the case since 2014, when Russia annexed Crimea and invaded eastern Ukraine.

The main difference is now there is an all-out war.

And that means long-range fires, and the ability to sustain them, will be even more important.

The senior U.S. defense official noted that’s one reason the U.S. is sending Ukraine 18 155 mm howitzers and 40,000 rounds of ammunition.

That supply of howitzers should prove helpful to Ukraine, said Crehan, the former Army artillery captain who left the service in 2011.

"If you were walking into a fight and your enemy had a bat and someone said, 'hey, here's a bat,' you certainly feel a lot more prepared for that fight," said Crehan, who commanded a Paladin 155 mm howitzer platoon in Iraq from June 2008 until June 2009. "So I think, certainly from a morale standpoint, that it will boost their confidence, they can do a better job of fending for themselves."

The 40,000 rounds of ammunition supplied by the U.S., he added, "is a significant amount of rounds for them to be able to impact damage on the Russian forces."

And that, said the senior U.S. defense official, is the goal of U.S. assistance to Ukraine.

“Our focus is on making sure that we get the Ukrainians the kinds of weapons and systems that they need to defend themselves in the moment they're in,” the official said. “That's why you saw howitzers and artillery rounds as part of this latest package. We're focusing on what their needs are now and we're in constant conversations with them about those capabilities and what they need going forward.”

Whether that’s enough remains to be seen.