Donated Norwegian missiles that were made in France have been shipped to Ukraine and paired with donated Fiat trucks to create SAM technicals. 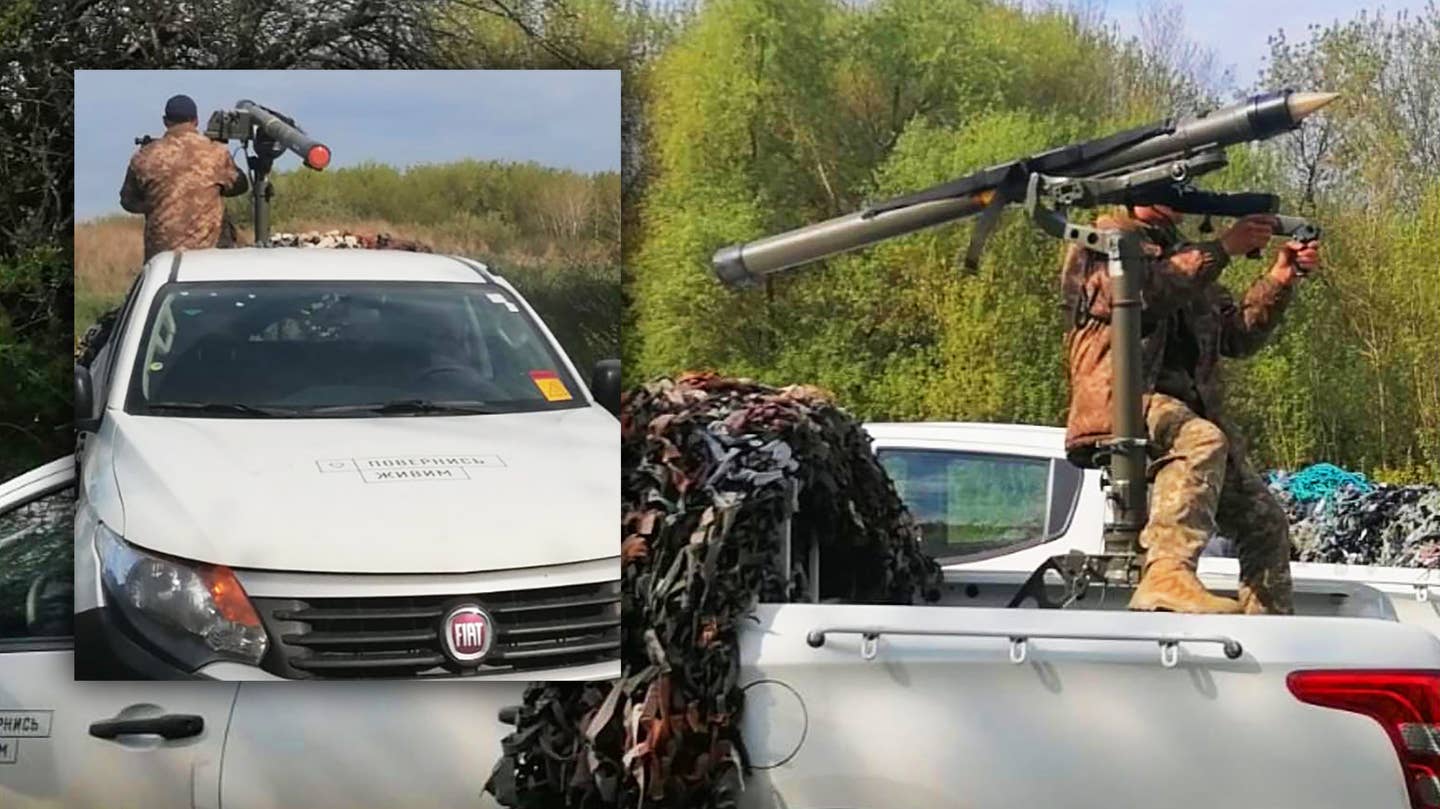 Norway’s recent donation of Mistral man-portable air defense systems, or MANPADS, including at least 100 missiles and an unspecified number of launchers, have made it to Ukraine. Now, thanks to an additional donation of an undisclosed amount of Fiat Fullback 4x4 pickup trucks from the Ukraine-based Come Back Alive foundation, some of those Mistral systems are now road-mobile.

You can read our initial report on Norway sending its Mistrals to Ukraine here.

The Come Back Alive foundation is a crowdfunded Ukrainian non-governmental organization founded by Vitaliy Deyneg in 2014 after Russia seized Crimea. The foundation then began supporting Ukrainian forces by fundraising money to deliver supplies and technologies ranging from bulletproof vests to thermal optics.

With the delivery of the Fiat Fullbacks, Come Back Alive hopes to promote the implementation of ‘mobile fire groups’ equipped with the French-made Mistrals to help address the looming aerial threat posed by Russian forces.

The MBDA-produced Mistral is a heat-seeking, short-range MANPADS ideal for use against aerial targets like unmanned aerial vehicles, or UAVs, as well as fixed-wing and rotary-wing aircraft. The Mistral missiles Norway donated actually came from the country’s Navy, but they were supplied from portable seated launch systems that could be used on land. Considering they are not quite as mobile as other MANPADS, this likely prompted their installation in the beds of pickup trucks, turning them into something akin to technical-based SAM systems.

“Mobile fire groups with MANPADS and ATGMs must be fast.” Andriy Rymaruk, head of the foundation’s military department said in the Facebook post. “They are destroying enemy drones and helicopters, and in the future, they will also cover the Russian fighter jets. They are working, in particular, with Stingers and 9K38 Igla systems. And this kind of work really needs mobility. That’s why we are donating new, not used, vehicles to those groups. These vehicles are serviceable and fast, and could assist in hitting the moving targets.”

The foundation posted photos of the Fullback-mounted Mistrals to Facebook, with the caption reading that Valery Zaluzhny, commander-in-chief of the Ukrainian Armed Forces, has claimed that the Mistrals have aided Ukrainian forces in taking down 20 Russian UAVs worth a total of $20 million. However, both numbers are unverified and have likely changed since the day of posting.

For perspective, the Facebook post goes on to explain that Russia’s ZALA drones and Orlan reconnaissance drones were among the UAVs shot down by these mobile fire groups, with a single Orlan-10 drone costing between $80,000 and $120,000 depending on the configuration.

The photos depict at least two white Fiat Fullbacks, the hoods adorned with the Come Back Alive foundation logo. In the beds of the trucks are the Mistral MANPADS launchers with camouflage netting strewn about in an attempt to obscure them from view. The added mobility of the Fiat Fullback paired with the camouflage shown has the potential to increase survivability and caters to the ‘shoot-and-scoot’ tactics that Ukrainian forces are becoming notorious for.

MANPADs have been pivotal in Ukrainian air defense efforts. Deliveries have been flooding in from numerous countries, making it so Ukrainian forces now have the most extensive and diverse MANPADS arsenal on the planet.

As exemplified by the Come Back Alive foundation’s role in delivering the Fiat Fullbacks that are mobilizing the Mistral systems, the donation underscores a unique and sometimes bizarre wartime relationship between the Ukrainian government and private entities. With the help of social media, the Ukrainian Armed Forces and its supporters have managed to launch crowdfunding campaigns to pay for the assets they need and may not otherwise receive.

An entrepreneurial campaign made popular by the hashtag #buymeafighterjet was launched by Ukrainian forces, the Czech government relied on crowdfunding to send weapons to Ukraine, and the Ukrainian embassy in Prague did the same shortly after Russia’s invasion began.

Civilian donations have become a fascinating aspect of Ukraine's wartime efforts, and without them, at least in this case, one of the drawbacks of the Mistral system, its more cumbersome primary deployment method, might not have been turned into an advantage.