The Flankers flew extremely low over the water and popped up for a toss bombing run, hitting multiple targets in a single pass. 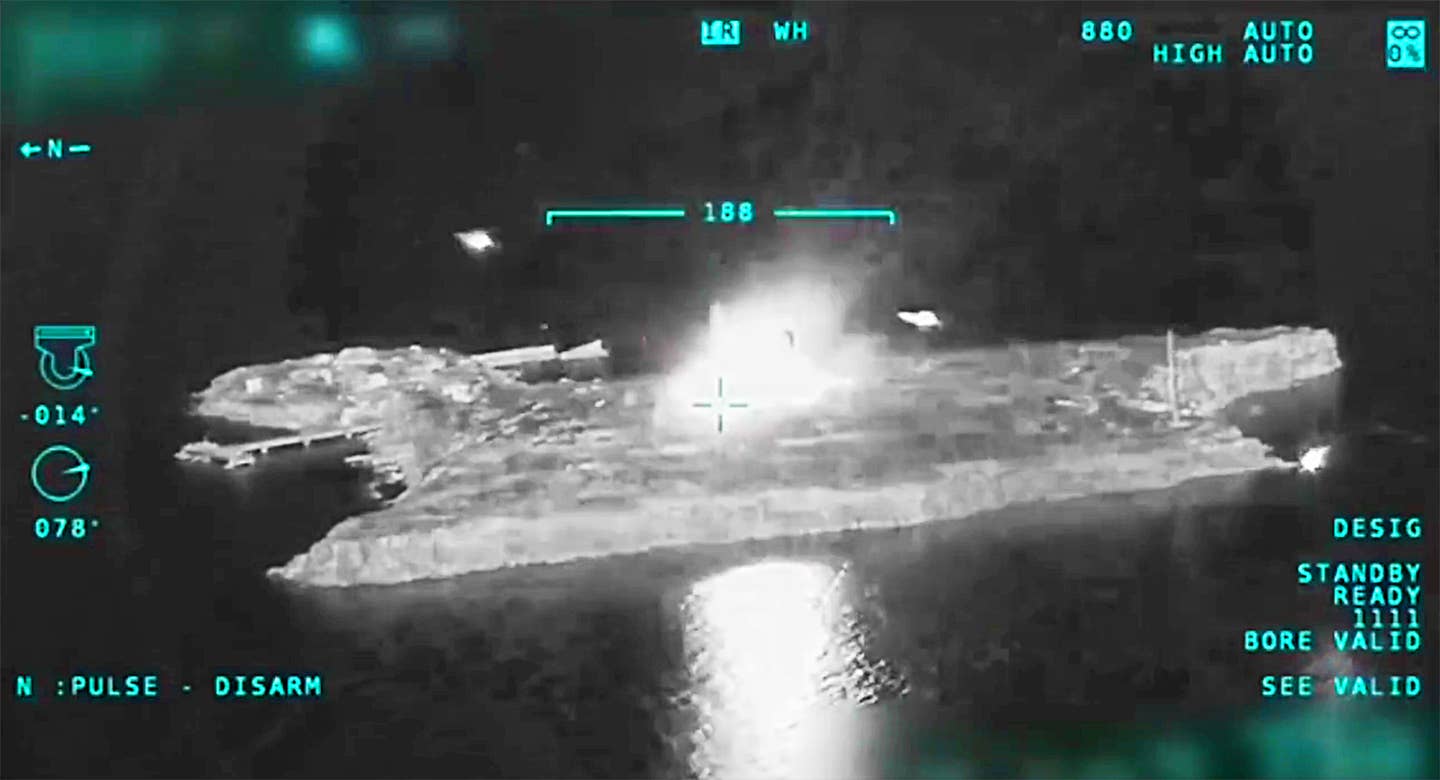 Yet another Ukrainian Bayraktar TB2 drone caught the strike on video, showing a tight shot of the island from the west. Two Su-27s enter very low from the south — lower than the lighthouse on the island’s southern point, while dropping infrared countermeasure flares.

A southern approach makes sense both because of the guidepost the lighthouse provides to line up on target and that more likely than not, Russian defenders on the island will be primarily focused on looking north and west toward the Ukrainian coastline.

The Flankers toss what were possibly high-drag bombs at minimal altitude, scoring what appear to be direct hits on the island’s main complex, buildings just above the pier, and on the eastern point. There are at least two major secondary explosions, suggesting a hit on ammunition and/or fuel storage area, on the island’s east end before a larger blast near the island’s center. From the limited albeit stunning angle we have of the attack, this was a very high-risk operation not just due to the threat from the enemy but from blast and fragmentation of the bombs striking the launching aircraft themselves.

The strike comes amid a wave of Ukrainian attacks on Snake Island using TB2 drones. These targeted facilities, air defense systems, and one Russian landing craft attempting to unload a replacement Tor SAM launcher. You can read our coverage of those attacks here.

It’s also possible that this attack was considered an acceptable risk with the Project 1164 Slava class cruiser Moskva off the board since its sinking in mid-April. The cruiser’s S-300F SAM system could have made a strike like this more dangerous if it was nearby and not already at the bottom of the Black Sea.

The Su-27 is a born and bred interceptor and air superiority fighter with secondary ground-attack capabilities. It doesn't have nearly the sophisticated systems found in most U.S. and NATO strike fighter aircraft. We know from Ukrainian pilots’ accounts earlier in the war that Su-27s have largely been used in an air-to-air role, but their longer range and payload make them a suitable fit for the Snake Island strike. They could also defend themselves in the air if need be.

At that speed and attack profile, it takes a high degree of skill just to get any bombs dead-on target. In this case, they appeared to do remarkably more than just that. Questions of skill aside, the strike, if indeed it happened as we see in the video, is a clear signal the Ukrainian Air Force can and will strike Russian positions with the jets and weapons they have despite Russian air defenses’ best efforts. Above that, Snake Island is now a hotly contested locale, which is a bad sign for Russia this deep into its invasion operation.