One U.S. official said the battles raging in eastern Ukraine could turn into a “knife fight.” 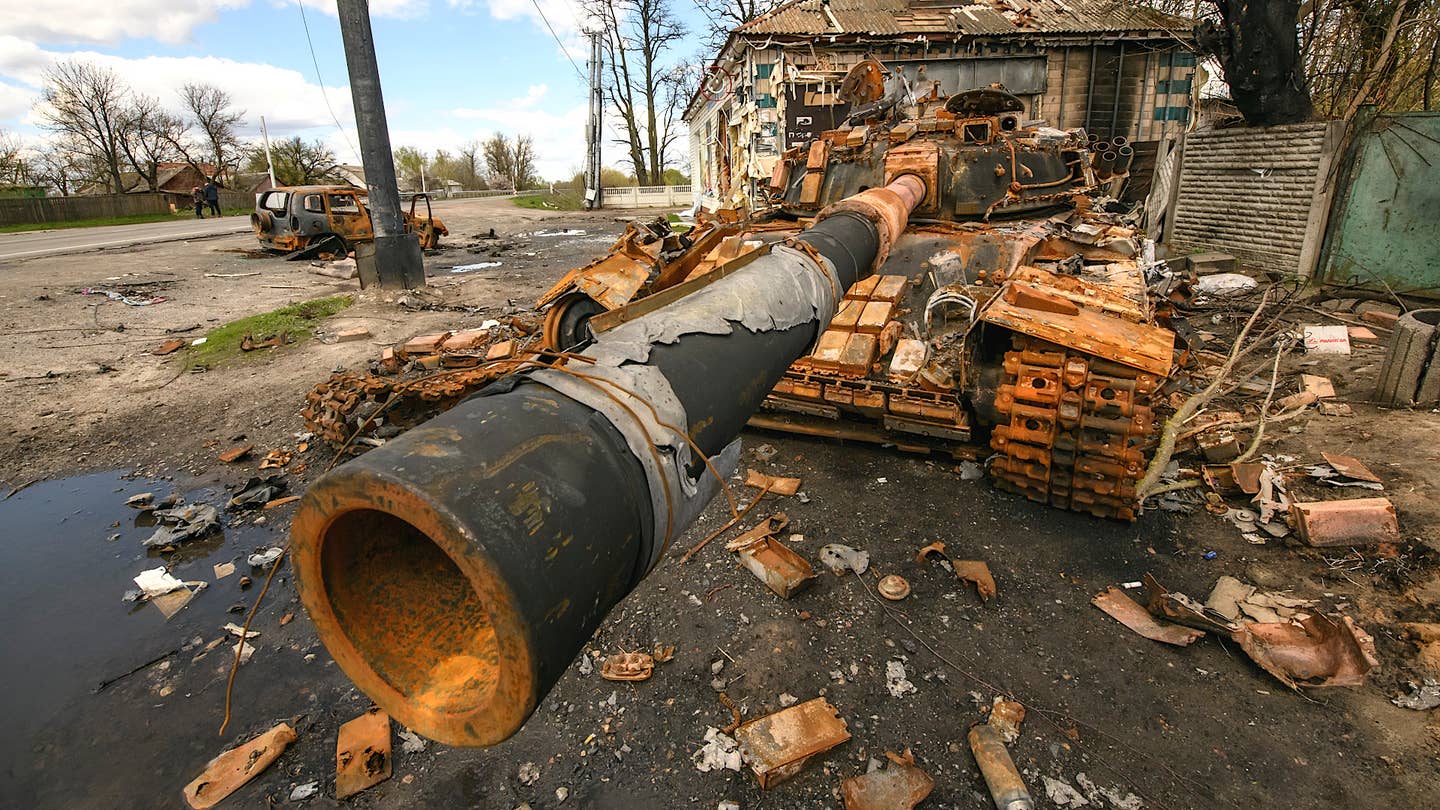 A senior U.S. defense official told reporters today that the Russian military's reinvigorated offensives in parts of eastern and southern Ukraine are not progressing as planned two weeks after they began. The U.S. military believes that Russia's forces in Ukraine's eastern Donbas region, in particular, are facing a "longer slog" that could devolve into an intense "knife fight" on the ground.

The senior U.S. defense official said that Ukrainian forces continue to be able to effectively resist Russian forces, but acknowledged that they have not been able to halt enemy advances entirely. This is all only likely to put additional emphasis on Ukraine's need for more robust military assistance from its international partners, including the United States, which has been surging aid to the country in recent weeks already.

Yesterday, U.S. President Joe Biden called for Congress to approve a new $33 billion Ukraine spending package that would include additional military and other aid. Legislation that would authorize new mechanisms to get military assistance to Ukraine faster, similar to the World War II Lend-Lease program, is now awaiting his signature.

The U.S. military expects to send at least a dozen individual shipments to the region via air, including aircraft loaded with 155mm howitzer ammunition and secretive Phoenix Ghost suicide drones, in the next 24 hours alone. This is on top of 20 military aid deliveries just in the past day or so.

Before diving into the latest updates below, The War Zone readers can get themselves fully up to speed first on how the conflict in Ukraine has been progressing already with our previous rolling coverage here.

A senior U.S. defense official provided the latest American assessment of the Russian military's latest offensives in Ukraine at a daily press briefing today. That individual said that Russian forces are "at least several days behind where they wanted to be" in the Donbas, and have been unable to link their main lines of effort in eastern and southern Ukraine together as planned.

Russian forces have likewise been unable to fully fix and encircle various Ukrainian positions in the Donbas and the advances they have made have been "plodding and uneven," according to the senior U.S. defense official. Separate reports regarding the fighting in the past few days have indicated that Ukrainian units are holding their ground in some areas and even counterattacking in others, including in a push that led them to recapture Ruska Lovova, a village along a key roadway north of Kharkiv. However, they are also said to be conducting deliberate withdrawals from certain areas and blowing up bridges to help consolidate resources and slow the progress of enemy forces.

The U.S. military's assessment of the current fighting in the Donbas lines up with a separate one that the U.K. Ministry of Defense put out earlier today.

All around, the senior U.S. defense official said today that there are indications that the Russian military's new operational endeavors are turning out to be a "longer slog" than expected and that the fighting could end up looking like a "knife fight" that could "go on for some time."

Russian forces have reportedly been under pressure for some time now to produce results that can at least be presented as victories ahead of the annual marking of the Soviet Union's victory over Nazi Germany in World War II. As it stands now, Russia's military has just over a week to make the desired progress if those 'successes' are to be integrated into the Victory Day events on May 9.

Russian forces are separately continuing to carry out air and missile strikes across Ukraine, with an apparent significant focus on targeting defense industrial, power, and other critical infrastructure. Russia's military has now fired more than 1,950 cruise and ballistic missiles at Ukrainian targets since the fighting began, but there are growing questions about the country's remaining stockpiles of these and other precision-guided munitions.

The senior U.S. defense official also said today that the Russian missiles that struck Kyiv had been aimed at facilities either producing or storing weapons, as the Russians had claimed yesterday. However, some were quick to point that, if this was the case, then at least one of the missiles clearly missed its mark, hitting a residential area and causing a number of civilian casualties. Vira Hyrych, a journalist working for the U.S.-funded Radio Free Europe/Radio Liberty's (RFE/RL) Ukrainian Service in the country's capital was among those killed in the strikes.

The Russian Ministry of Defense subsequently said that all of those missiles were Kalibr types fired from a Kilo class diesel-electric submarine in the Black Sea. The Russian military subsequently released a video, seen below, that it said was of these launches. Just yesterday, the U.K. Ministry of Defence assessed that Russia's Black Sea Fleet remains a very real threat to Ukraine despite the recent loss of the cruiser Moskva.

Pictures had recently emerged on social media reportedly showing Kalibr missiles being loaded onto the Kilo class submarine Veliky Novgorod at Russia's naval base at Sevastopol on the occupied Crimean Peninsula.

Today, commercial satellite imagery provider Maxar Technologies released new shots of Sevastopol taken today, including one, seen below, that appears to show more missiles being loaded onto a submarine.

Maxar also released two other images, seen below, showing what have been reported to be pens for holding trained dolphins at the entrance to Sevastopol Bay. There is a possibility that the Russian Navy may have deployed these marine mammals to help protect against enemy combat divers.

All of this would only seem to put additional emphasis on continuing to expand the scale and scope of military assistance to Ukraine. As already noted, the U.S. military says that it expects to have sent out at least 12 more individual aid shipments for Ukraine within the next 24 hours. This will include the first batches of Phoenix Ghost loitering munitions, also known as suicide drones, which you can read more about here.

Heavy artillery, including 155mm howitzers from the U.S. and other countries, has become an increasingly important component of these military assistance packages. Tanks and other armored vehicles have steadily become more common components of new aid shipments, too.

Getting additional air defense assets to Ukraine remains another focus area, but a senior U.S. defense official said today that there remain no plans to send higher-end U.S.-made systems, such as Patriot. This is in line with comments from U.S. Secretary of Defense Lloyd Austin yesterday, who said that aid in this regard continues to be primarily centered on delivering Soviet-era systems or derivatives thereof, such as S-300 surface-to-air missile systems, that Ukrainian forces have existing experience with. Austin had also emphasized that the U.S. government had determined that artillery was a more significant priority overall for the Ukrainian military at this stage in the conflict.

The video below, from TV Zvezda, the Russian Ministry of Defense's official television channel, interestingly shows a Ka-52 attack helicopter employing a tactic first observed back in March wherein unguided rockets are fired at an upward trajectory. This appears to be a way to help keep the helicopter out of range of enemy forces, but that significantly degrades the accuracy of the rockets.

The videos below reportedly show a Russian UR-77 mine-clearing line-charge (MICLIC) vehicle in use near Rubizhne in Eastern Ukraine. These vehicles are typically used to help clear mines and other obstacles, but have also been employed against structures and other hardened emplacements in past conflicts, including in Syria.

The picture below reportedly shows a Russian 1L260 Zoopark-1M mobile counter-battery radar system on a trailer, wedged under a bridge in Russia's Voronezh region, which borders Ukraine.