Drones, artillery pieces, and more are included in a new U.S. military aid package for Ukraine. 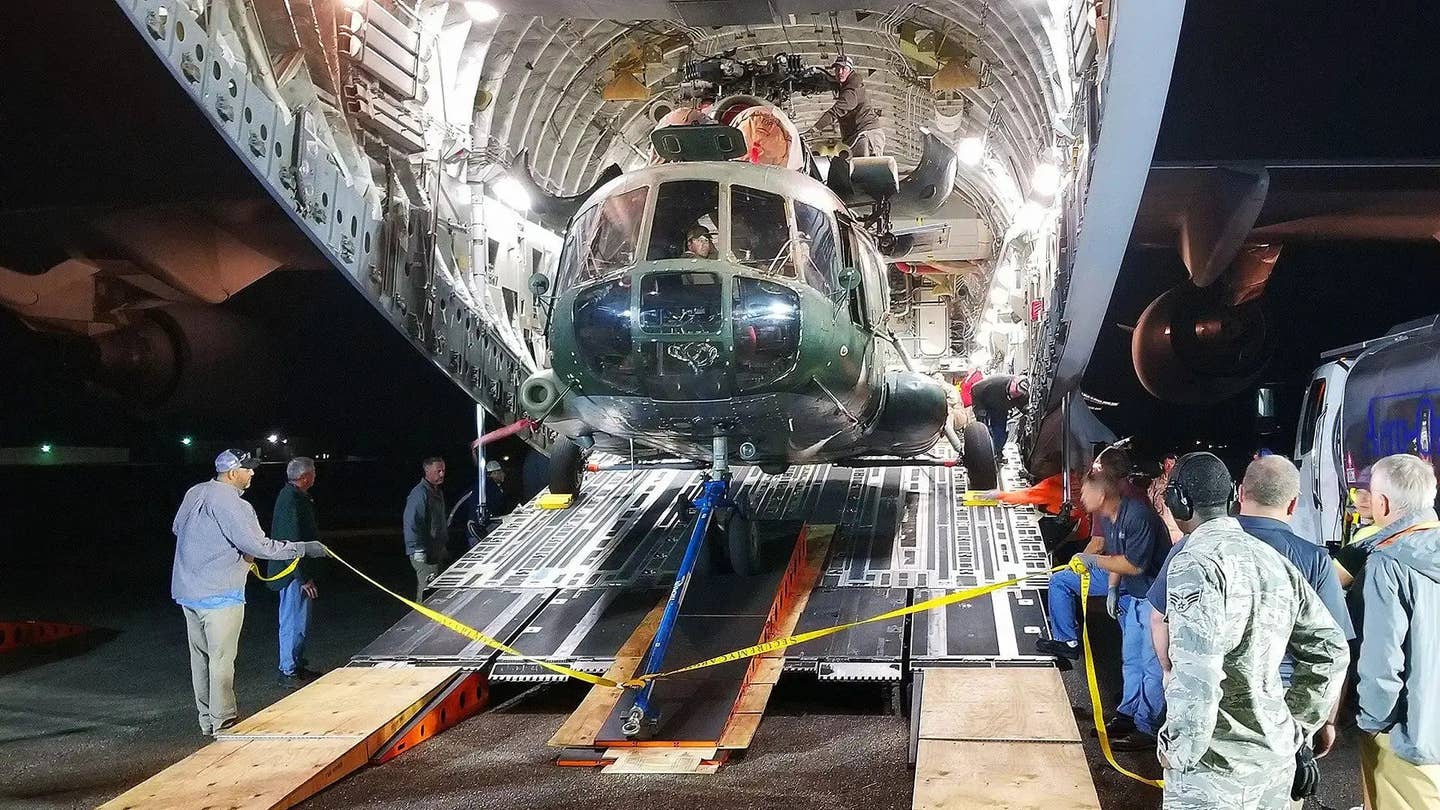 Despite multiple earlier reports that this would not be the case, the U.S. government has included Russian-made Mi-17 Hip helicopters in a new batch of military assistance for Ukraine. This aid package will also include drones, howitzers, Humvees, and much more, and has a total value of approximately $800 million. There had been talk in the past about the possibility of the U.S. military transferring Mi-17s that had belonged to the now-defunct Afghan Air Force to Ukraine.

The Pentagon is set to meet today with representatives from eight prime defense contractors regarding the industry's general ability to keep up with demands to support Ukraine's military in its ongoing fight against Russia. Questions about the available capacity to produce more Javelin anti-tank and Stinger shoulder-fired surface-to-air missiles, which Ukrainian forces have received thousands of already and have used to great effect, have become a particularly hot topic of discussion, as you can read more about here.

As Russia's war in Ukraine grinds on, the Presidents of Estonia, Latvia, Lithuania, and Poland have made a high-profile visit to Kyiv today. This follows U.K. Prime Minister Boris Johnson's visit to the Ukrainian capital over the weekend. Polish President Andrzej Duda had previously traveled there with his Czech and Slovenian counterparts back in March. Though Russian forces have withdrawn from much of northern Ukraine as they refocus their efforts further to the east and south, there remains a threat of possible air and missile strikes on Kyiv and targets elsewhere across the country.

Before getting into the latest updates below, The War Zone readers can first get fully up to speed on the present state of conflict in Ukraine here.

The U.S. government has now officially disclosed what will be included in the latest tranche of military aid for Ukraine. Despite the previous reports from Fox News and CNN, 11 Mi-17 helicopters are included in the package, among many other things. The helicopters are indeed ones that were originally meant for the former Afghanistan Air Force. The Pentagon says that the contents was finalized after multiple conversations with Ukrainian officials and in light of Russia's refocusing of its efforts on operations in the eastern Donbas region. You can find a more detailed look at what the U.S. government now plans to send to Ukraine here.

The video below appears to show Ukrainian forces armed with a Milan anti-tank missile system.

The video in the Tweet below reportedly shows 122mm RM-70 rocket artillery systems heading to Ukraine from the Czech Republic.

The Ukrainian military claims to have captured documents that indicate a column of Russian vehicles they recently destroyed came from the country's garrison in Tajikistan. This is the latest indication of the lengths to which Russia's military has gone to find additional personnel and materiel to commit to the fighting in Ukraine.

Fox News and CNN have now both reported on the elimination of the Mi-17s from the next major U.S. military aid package for Ukraine. It's unclear how many of these helicopters, which are designed primarily to be transports but that can also be armed with various weapons for use in a ground-attack role, American officials had considered transferring to the Ukrainian military or what their origins might have been. As already noted, there are a number of ex-Afghan Air Force Hips currently in the United States, in storage at the boneyard at the U.S. Air Force's Davis Monthan Air Force Base in Arizona, some of which could be delivered to Ukraine.

It's not clear why the American authorities would have nixed this transfer. Ukraine already operates a variety of Mi-8/Mi-17 Hip variants, which would have made it that much easier for them to get additional examples into the fight. The U.S. government has previously declined to be directly involved in the transfer of fixed-wing combat aircraft to Ukraine, citing the potential risks of an especially serious escalation in tensions with Russia, as well as pragmatic questions about what aid would be most beneficial for Ukrainian forces in the current conflict.

The new $700-750 million U.S. military assistance package for Ukraine could still include various unspecified unmanned systems, artillery pieces, Humvees, and items to help protect against chemical, biological or nuclear attacks, among other things, according to multiple reports. Ukrainian officials have been in direct contact with U.S. defense contractor General Atomics, the company behind the iconic MQ-1 Predator drone, as well as various other drone designs, such as the MQ-1C Gray Eagle and MQ-9 Reaper.

A spokesperson for Ukraine's ambassador to the United States, Oksana Markarova, told The Washington Post that the country wants to "surprise Russia on the battlefield,” when asked about what it might be looking to acquire from General Atomics specifically.

Representatives from eight prime defense contractors in the United States are set to meet with Pentagon officials about what can be done in general to assure the continued flow of military assistance to Ukraine. General Dynamics and Lockheed Martin are among the companies that will be in attendance, according to CNN. Deputy Defense Secretary Kathleen Hicks said yesterday that she had already met with Gregory Hayes, the CEO of Raytheon, which produces the Javelin missile through a joint venture company with Lockheed Martin. A senior U.S. defense official said today that this is not the first such roundtable the Pentagon has hosted.

A U.S. official reportedly told CNN that there is an expectation that major U.S. military assistance for Ukraine "is going to be a years-long endeavor," especially given the Russian military's very active targeting of its domestic defense industry. The U.S. government has already provided approximately $2.4 billion in military aid to Ukraine since President Joe Biden took office last year, much of which has come since Russia kicked off its invasion of the country in February of this year.

The U.S. military is now considering using personnel deployed along NATO's eastern periphery to help train Ukrainian forces "remotely" on the use of various new weapon systems. The potential need for additional training has been a limiting factor when it comes to expanding the scope of military aid to Ukraine. American officials have notably been working to figure out how to provide more Ukrainian personnel with instruction on how to utilize Switchblade loitering munitions, also known as suicide drones, which are now being delivered and that you can read more about here.

The video below, which is unconfirmed, appears to show a 152mm DANA or 155mm Zuzana self-propelled howitzer in operation in Ukraine. There have been reports that Slovakia had been considering transferring Zuzanas to Ukraine. The Ukrainian military had previously evaluated the Dana-M2 before the conflict began, which raises the possibility that this could be old footage.

For his part, Ukrainian President Volodymyr Zelensky continues to ask for even more military assistance, to include higher-end weapon systems, such as combat aircraft and tanks. Ukrainian Defense Minister Oleksiy Reznikov has said the country needs longer-range weapons to prevent encirclement by Russia.

Beyond just military aid, the Ukrainian government continues to enjoy significant international support. Today, Alar Karis, Egils Levits, Gitanas Nausėda, and Andrzej Duda, the Presidents of Estonia, Latvia, Lithuania, and Poland, respectively, demonstrated their commitment by making a very public trip to Kyiv. The leaders of these European countries, which are all NATO and European Union members, had traveled there by train and also visited the devastated suburb of Borodyanka.

The heads of state of four NATO members openly traveling in what is still very much a warzone is certainly a significant display of solidarity. Authorities in each one of these nations would have had to have assessed the risks of making this trip to be acceptably low. Even with Russian withdrawals from the Kyiv region, this is still the continued potential for Russian air or missile, as well as the possibility of coming across mines, booby traps, or other hazards when traveling to locations like Borodyanka. The War Zone previously highlighted many of these same issues when discussing U.K. Prime Minister Boris Johnson's recent visit, which carried the additional weight of a visit by the head of government of a nuclear-armed NATO member. Ukrainian Mayor Vitali Klitschko said separately today that two-thirds of Kyiv's residents have returned to the city as the threat of attacks has lessened.

The U.S. government has still not been able to conclude whether or not Russian forces used chemical weapons in the strategic southern port city of Mariupol, as has been alleged. Mariupol has been under a brutal siege by Russia's military for weeks now already, with only a relatively small pocket of Ukrainian resistance remaining in the center of the city.

The U.K. Ministry of Defense has assessed that the Russian military's appointing of a new commander to oversee its operation in Ukraine, Alexander Dvornikov, is an attempt to provide more coherent command and control, as well as reinvigorate offensives in the eastern portion of the country. Dvornikov has significant experience commanding forces in the field, having led Russian troops in Syria where he earned the nickname "The Butcher of Syria" over the alleged deliberate targeting of civilians. Similar allegations regarding Russia's operations in Ukraine are steadily growing already. The U.S. military has separately assessed that problems with basic unit cohesion, as well as low morale, continue to hamper the effectiveness of Russian forces in Ukraine.

The U.S. military says that Russia appears to have established three new staging areas opposite Ukraine's eastern Donbas region. This comes amid other growing indications that a new major Russian offensive in that part of the country could begin soon.

Satellite imagery indicates that Russian forces are continuing to make heavy use of the airport in the southern Ukrainian city of Kherson, despite a devastating attack by Ukraine's forces there in March. There are also indications that Russia's military may be working on a major effort to resupply its forces in southern Ukraine ahead of a new offensive.

More evidence of potential Russian war crimes has emerged in the Ukrainian town of Bucha outside of Kyiv. A team of French forensics experts is now on the ground there to assist with investigations into these alleged atrocities.

Dmitry Peskov, the top spokesperson for Russian President Vladimir Putin, has rejected the idea of trading Ukrainian prisoners of war for Viktor Medvedchuk, a pro-Russian Ukrainian oligarch. Medvedchuk, who was under indictment on charges of treason before Russia launched its all-out invasion, had skipped out on his house arrest after the fighting began, but was detained again yesterday.

The Ukrainian government has reportedly seized 10 Russian-owned commercial ships in the port of Odesa on the Black Sea.

Magdalena Andersson and Sanna Marin, the Prime Ministers of Sweden and Finland, respectively, held a joint press conference today to discuss the potential for both of their countries to join NATO. Though there is no firm timetable for either country to even make a formal request to join the alliance, it has seemed increasingly likely for weeks now that both will do so in light of Russia's invasion of Ukraine.